Hamas failing to rally West Bank against US peace plan

Security coordination between Israel and the Palestinian Authority is the main obstacle to Hamas’ efforts to mobilize armed resistance in the West Bank after the unveiling of the US peace plan. 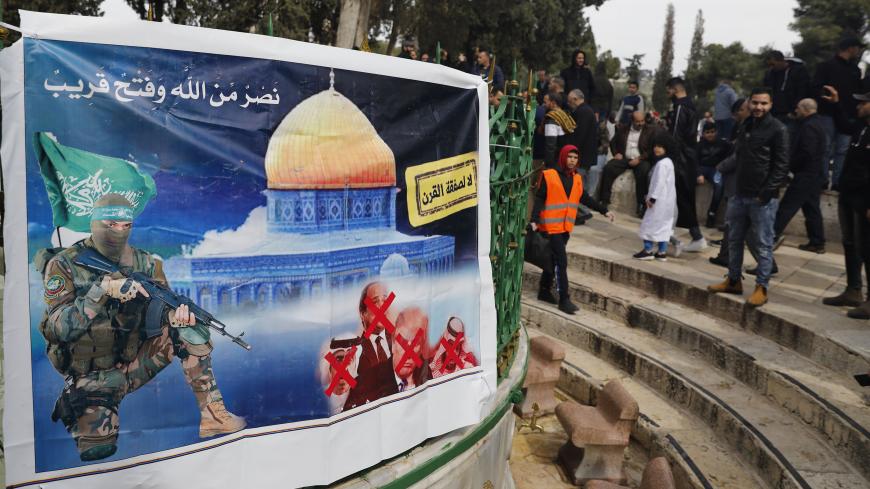 A banner placed by Hamas with a slogan in Arabic reading "No to the deal of the century" (US-proposed peace plan) is pictured as Palestinian Muslim worshippers gather at the Al-Aqsa Mosque compound, Jerusalem, Feb. 14, 2020.

Hamas and other Palestinian factions have been trying to spark armed resistance in the West Bank to the recently revealed US Mideast peace plan, but they face several challenges. Recent incidents there have been limited to sporadic individual attacks against Israeli targets.

Palestinians have roundly rejected the US peace plan, dubbed the “deal of the century” by the administration of US President Donald Trump. Since the United States released details of the plan Jan. 28, Hamas has been making intense efforts to ignite the West Bank. But it's been stifled in part by the continued security cooperation between Israel and the Palestinian Authority (PA). The PA has imposed absolute control over the West Bank, which keeps Hamas from finding a foothold there, be it financially, militarily or politically.

Mahmoud Mardawi, a member of Hamas’ National Relations Office, agreed with that assessment.

"Hamas has extensive experience in confronting the Israeli army and is well aware of [the West Bank’s] topography, which helps it transfer weapons and personnel, conduct training and choose the locations of attacks then retreat. Yet the ongoing security coordination between the PA and Israel prevents Hamas from achieving its military aspirations in the West Bank, despite a few successes here and there," he told Al-Monitor.

An Israeli report published Feb. 13 by the Intelligence and Terrorism Information Center stated that a spate of individual attacks during the first third of February was the fiercest in years. It said Israeli soldiers and settlers were wounded for the first time in five months during three attacks: a car-ramming and a shooting in Jerusalem, as well as another shooting in Ramallah. But there have been few Hamas-organized attacks.

Wasef Erekat, a Palestinian military expert in the West Bank and former PLO artillery unit commander, told Al-Monitor, "The price that Hamas' leadership … may have to pay for such actions makes it reluctant. … This is why only individual and not organized attacks are carried out." The current situation indicates such attacks "might do more harm than good," he added.

A Palestinian security official told Al-Monitor on condition of anonymity, “There is a Palestinian [Authority] political decision to maintain security and calm in the West Bank. The Palestinian leadership is dealing with the peace plan with what it deems appropriate peaceful and political means, away from any field action that harms West Bank stability.”

Israeli Channel 13 broadcast a report Feb. 7 by its correspondent for Palestinian affairs, Hezi Simantov, stating that Hamas is frustrated but is continuing its efforts to raise reactions in the West Bank. Hamas, the report continued, expected more popular mobilization there since the plan's announcement, as there are dozens of friction points between Palestinians and Israelis in the West Bank.

Imad Abu Awad, an expert on Israeli affairs at the Vision Center for Political Development in Turkey, told Al-Monitor Hamas lacks the organizational structure in the West Bank to create armed cells. "Most of its leaders [there] have distanced themselves from the organizational work, which gave a negative impression to its youth. But that didn't prevent Hamas from trying to find a foothold in the West Bank to carry out attacks, even on a small scale. Hamas’ current efforts are based on the work of amateurs rather than professionals,” said Abu Awad.

Any larger efforts probably would be overcome by the Israeli army's massive presence in the West Bank and its interaction with the PA, which have resulted in the arrests of hundreds of Hamas members.

Another impediment is the ongoing division between Fatah and Hamas. Also, many Palestinians in the West Bank work in Israel, and don't want to risk their jobs by provoking resistance.

Hamas leader Abdul Rahman Chedid told Al-Monitor, “For over 12 years, the West Bank has been subjected to an Israeli and PA policy, under US supervision, of draining the sources of resistance -- for instance, arresting Hamas members, eliminating them, confiscating their weapons, and cutting their financial supplies from several sources. Hamas is seeking to reactivate resistance [there], despite the difficulties it faces. It has achieved some successes, but a popular uprising needs all Palestinian efforts, while Fatah and the PA are still hindering it for fear of harming their interests.”

Another drag on the momentum Hamas is struggling to achieve could be Palestinians' declining confidence in President Mahmoud Abbas, according to a Feb. 11 opinion poll published by the Palestinian Center for Political and Survey Research in Ramallah. This lack of faith mainly stems from Abbas' very public opposition to any armed resistance against Israel. In this case, Hamas might wait to see whether a successor to the 84-year-old leader could surface who would work on using armed attacks to achieve political goals. Herein lies Hamas’ chance, but nothing is guaranteed.