Israel has announced that it foiled a Hamas plan to establish an explosives lab in the West Bank, warning that Hamas still seeks to extend the armed resistance from Gaza to Ramallah. 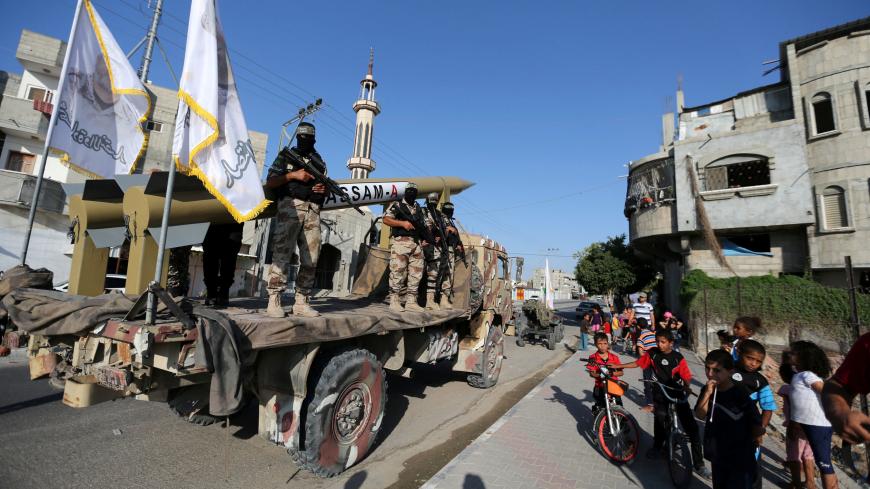 Palestinian members of Al-Qassam Brigades, the armed wing of the Hamas movement, display homemade rockets during a military parade in Rafah in the southern Gaza Strip, Aug. 21, 2016. - REUTERS/Ibraheem Abu Mustafa

The Shin Bet revealed July 3 that it had arrested 35-year-old Fadi Abu al-Sabeh in the Israeli city of Tayibe in May. The intelligence service said Abu al-Sabeh entered Israeli territory under the pretext of receiving medical treatment, but that the Palestinian explosives expert trained by Hamas' armed wing Izz ad-Din al-Qassam Brigades was sent to set up an explosives lab in Israel.

The news comes amid a wave of arrests in the West Bank. On July 8, the Israeli army arrested 32 Palestinians, including Hamas leaders and members as well as former prisoners, in Qalqilya, Bethlehem and Jenin.

On April 28, Israel announced that it foiled a bombing operation that a Hamas cell had planned in the settlement of Ma'ale Adumim near Jerusalem following the Israeli elections on April 9, noting that the cell had received instructions from Hamas in Gaza.

On Feb. 25, the Palestinian Authority raided a Hamas cell that planned to carry out operations inside Israel with explosive belts manufactured in Nablus after receiving $50,000 from Hamas in Gaza.

Hamas spokesman Hazem Qassem told Al-Monitor, “Israel continues to publish news about arresting those accused of planning armed operations and manufacturing explosives, but Hamas and all the Palestinian people have the right to exercise resistance over every inch of the West Bank under Israeli occupation. It is no secret that we urge and encourage the people of the West Bank to continue their rebellion against the occupation.”

The Shin Bet statement claimed that under interrogation, Abu al-Sabeh admitted that he had been recruited by al-Qassam Brigades in July 2018 and underwent intensive training in Gaza to manufacture explosive devices. In May, when he left the Gaza Strip under a medical referral to Israel, he wore a coat containing instructions written by Hamas fighters to be delivered to their counterparts in the West Bank. They included instructions to help them carry out attacks against Israel.

A Palestinian security official in the West Bank told Al-Monitor on condition of anonymity, “The security situation in the West Bank does not call for establishing armed cells or labs to manufacture explosives and attack Israel militarily. There is no Palestinian approval of this and the PA will not accept that the Palestinian territories be used to carry out plans that do not serve the national interest.”

Israel’s Walla news site quoted an Israeli intelligence source as saying July 3 that Abu al-Sabeh’s arrest followed the arrest of a number of Hamas members in April and May in the West Bank. It said they had worked to build infrastructure, raise funds and recruit suicide bombers while in contact with Hamas in Gaza. The report noted that it was all part of the Hamas leadership’s goal to carry out large bombing attacks in the West Bank.

Emad Abu Awad, a researcher in Israeli affairs at Vision Center for Political Development, told Al-Monitor, “The Shin Bet is exaggerating its security achievements. However, the [Hamas] movement is seeking to extend its work from the Gaza Strip to the West Bank to attack Israel. Palestinians in the West Bank support the resistance, since it is the most accepted option by Palestinians.”

The latest Palestinian poll conducted by the Palestinian Center for Policy and Survey Research in Ramallah on July 9 showed that 38% of Palestinains support armed action against Israel and 23% prefer peaceful popular resistance.

Abu Awad added, “The resistance has made it clear that it wishes to move its Gaza military experience to the West Bank, as evidenced by occasional Israeli reports of foiling operations related to Gaza prior to their occurrence, as well as individual attempts to ignite the West Bank.”

Israel has always sought to link armed cells dismantled in the West Bank to the Hamas leadership in Gaza, a connection it may use to tighten the siege on Gaza and turn the international community against it.

By publicizing the explosives lab in the West Bank — regardless of the accuracy of its claims — Israel is also sending a message to the PA that the security situation around it is unstable and can take a sudden turn because of Hamas’ attacks. Israel wants to make the PA fear Hamas’ efforts to ignite the West Bank and give it reasons to exert further pressure on the movement.

Wassef Erekat, a former artillery commander for the Palestine Liberation Organization, told Al-Monitor, “There is no military infrastructure in the West Bank. The Palestinian and Israeli security services are keeping a close watch on the situation. However, several parties want to carry out military action there.”

Erekat added, “The Palestinian situation does not allow for armed attacks; they are expensive to execute. The fact that the resistance is restricted in the West Bank means that the explosives lab was established by one or a few people without any organizational directives.”

Israel Hayom reported June 20 that the first months of 2019 saw the arrest of 1,077 Palestinians in the West Bank, the confiscation of 263 weapons and the detection of 200 armed groups, half of them associated with Hamas. In 2018, 3,173 Palestinians were arrested, 406 weapons were confiscated and 802 armed groups were uncovered, again half of them affiliated with Hamas.

Said Bisharat, a former Palestinian prisoner and al-Qassam member, told Al-Monitor, “The West Bank is a source of fear for Israel, though it is devoid of any organizational activities in light of the joint policy between Israel and the PA to pursue the resistance. Hamas is attempting to carry out operations there, pumping money to form armed cells and trying … to send individuals to the West Bank. Israel is aware of this and this is how it catches them immediately.”

Bisharat noted, “Today, the West Bank is not capable of hosting stable cells. One cannot hide a single bullet there, let alone an explosives lab.”

Israel's exposure of the Hamas members accused of setting up an explosives lab suggests that the West Bank will be an arena of future confrontation between the two parties. Whether the Israeli narrative is confirmed or not, it does not diminish Hamas' ongoing attempts to move its battle with Israel to the West Bank.

The PA opposes Hamas’ intentions and seeks to thwart any actions in the West Bank, fearing that they will prompt Israel to occupy its territories and that history will repeat itself. In the second intifada, following Hamas' suicide bombings, Israel's Operation Defensive Shield in March 2002 destroyed the PA’s institutions.