Hamas has released a video of its fighters training in Jenin that's been taken as a message that they will soon resume operations in the West Bank. 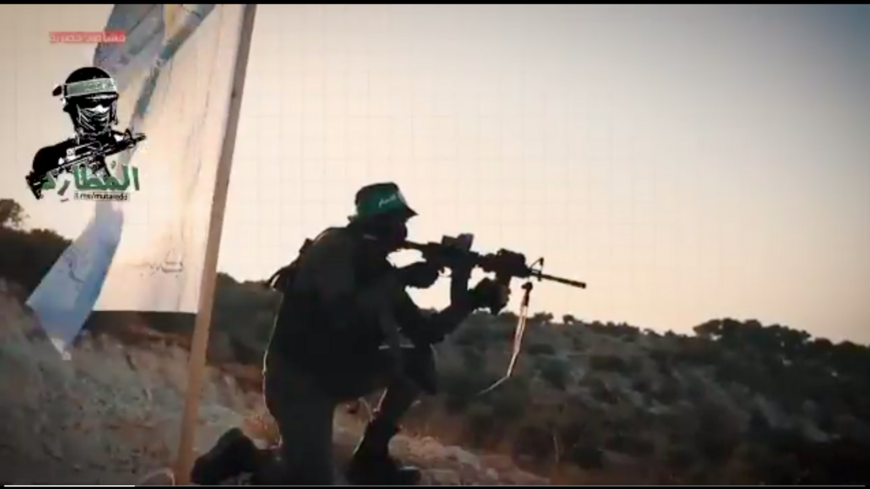 A still from a video released by Hamas' Izz ad-Din al-Qassam Brigades Sept. 3 shows fighters training in Jenin, in the West Bank. - Hamas

The video, which was widely circulated on local media outlets and social networking sites, features a group of al-Qassam fighters conducting military exercises with light weapons. The rare sight of the scarf and banner of al-Qassam Brigades in the West Bank put the Palestinian Authority and its security services on high alert and led to a campaign of arrests in Jenin.

Israeli journalist Ehud Hamo said on Israel’s Channel 12 Sept. 5 that the video, made not far from the Israeli city of Afula, aroused concern among the Israeli security authorities. He raised the possibility of these gunmen carrying out armed operations inside Afula, which suffered such attacks during the second intifada.

“This video seems to be an exception, as it features scenes and images that we have not seen in years in the West Bank. It does, however, reflect the recent situation of more armed Palestinian youths carrying out shootings at an unprecedented rate. The security establishment fears that the escalation in these areas will lead to an explosion,” Hamo added.

“The Israeli army and the PA are increasing pressure in the [Jenin] camp to find Hamas members,” he said, adding, “The PA is embarrassed by this video.”

Mustafa al-Sawaf, a Gaza-based political writer who is close to Hamas, told Al-Monitor, “The emergence of this video at this time and place shows that al-Qassam Brigades have almost completed their preparations and will soon launch armed military activities in the surrounding areas.”

He added, “The video also sends to the Palestinians that the armed resistance is still active."

There has been an uptick in shootings targeting Israeli soldiers and settlers in the West Bank, with armed confrontations becoming an almost daily occurrence in Palestinian cities. Most recently, a group of Palestinians fired at a bus carrying Israeli soldiers in the Jordan Valley area on Sept. 4, wounding seven of them. On the same day, an Israeli military checkpoint near Ramallah came under a drive-by attack that wounded four Israeli soldiers. Israel has accused Hamas and the Islamic Jihad of being behind the escalation.

The Hebrew news site Walla reported Sept. 1 that Hamas is closely cooperating with the Islamic Jihad movement in the West Bank to carry out operations against Israeli targets.

Walla cited Israeli security services as saying that Hamas’ leadership helps transfer funds and recruit resistance fighters in the West Bank. But in light of the Israeli arrest campaign against Hamas members in the West Bank, the movement is seeking cooperation with Islamic Jihad in Jenin, Nablus and the neighboring villages.

Meanwhile, Hamas is calling for the escalation of armed resistance against the Israeli army and settlers in the West Bank and praising incidents in which Israeli soldiers or settlers are targeted. According to Israeli intelligence, Hamas contributes by financing and providing military capabilities for various resistance factions.

The video has raised concerns in both Israel and the PA over Hamas publicly reactivating cells of militants in the West Bank.

In November 2021, dozens of al-Qassam members carrying weapons attended the funeral of Hamas leader Wasfi Qabha in Jenin, angering the PA. Governor Akram Rajoub described the scene as a “serious development” and the PA responded to the funeral incident by making changes to its security leadership in Jenin.

The Israeli security establishment believes that Hamas is seeking to ignite the West Bank even as it strives to maintain calm in the Gaza Strip and that many of the leaders of the group's al-Qassam Brigades are previous prisoners who were deported to Gaza upon release and now use their connections run operations in the West Bank. Israel also believes that Hamas is taking advantage of a new generation of young people who are eager to fight the Israeli occupation.

Palestinian author and political analyst Nihad Abu Ghosh told Al-Monitor that Israel has increased its security activities in Jenin for fear that the violence could spread to other areas in the West Bank, as the armed militants in Jenin are inspiring young people elsewhere.

He added, “I think what distinguishes Jenin, its camp and the surrounding villages is the national unity among the factions and the armed groups. However, all operations are carried out individually and not directed by an organization, even if some of the perpetrators belong to certain factions.”

“This is what concerns Israel and makes it unable to anticipate such actions,” he noted.