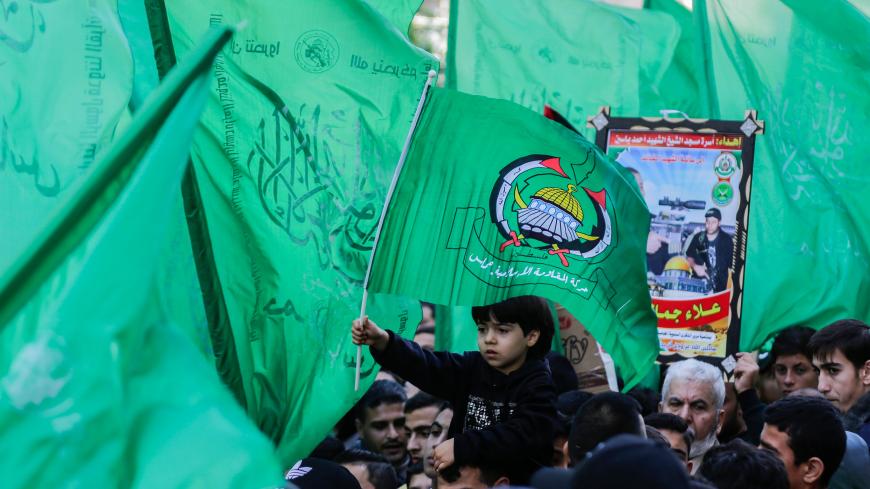 In an interview with the Hamas-affiliated Palestinian Information Center (PIC) Dec. 22, Sami Khater, a member of the Hamas Political Bureau, identified his movement’s five strategic priorities for 2020. Hamas leaders rarely talk about specific priorities for their next strategy. This has been limited to Hamas’ official political documents.

Priorities include developing Hamas’ armed structure against Israel to tilt the balance of power in its favor; adopting a national position on managing the conflict with Israel; confronting the Israeli measures against the Palestinians in every way; standing up to the US-proposed deal of the century; and mobilizing the Palestinian diaspora to support the Palestinian people back home.

The talk about Hamas’ priorities came Dec. 14, only days after the 32nd anniversary of the founding of the movement. Khater, 70, is based in Qatar and is one of the first-generation members of Hamas and a member of its political bureau since its founding. He supervised the establishment of political action departments.

He told Al-Monitor, “Hamas is permanently working on achieving its strategies, which are approved by its organizational institutions. As long as they are strategies, they are not linked to a specific time limit. But the most important obstacles to achieving them are Israeli measures at various levels and some international policies, such as the US administration and other countries in the region whose regimes bet on Israeli and US support to ensure the stability of their rule.”

Khater added, “Hamas’ priorities include implicitly restricting its struggle to fighting Israel in the land of Palestine. Hamas does not want to target any party that supports Israel. It is adhering to the policy of noninterference in the internal affairs of states, without being aligned with a specific political axis against another.”

Speaking to the PIC, Khater pointed out that although Hamas’ name was not removed from the European and US lists of terrorist groups, the world deals with it as an existing active and influential Palestinian party.

Khater had confirmed in a research paper published by al-Zaytouna Center for Studies and Consultations in Beirut in 2015 the existence of in-depth dialogues between Hamas and official and popular European parties for getting Hamas’ name off of their list of terrorist groups.

On Feb. 2, 2015, Ahmed Youssef, a former political adviser to Hamas leader Ismail Haniyeh, spoke in an article published on Sama news website about Hamas holding meetings with Norway and Switzerland. Osama Hamdan, a former Hamas representative in Lebanon, highlighted in an article published by Amad news website on Aug. 6, 2015, Hamas’ relationship with Russia and a number of African and Latin American countries.

Sari Orabi, a Palestinian expert on Islamist factions, told Al-Monitor, “Fatah shares these same priorities. Hamas cannot overlook them. Since 2007, Hamas has been unable to create a formula for joint management of the Gaza Strip.”

Orabi added, “Mobilizing Palestinians abroad requires recognition that this is a step long overdue by Hamas, which failed to take advantage of the vacuum left by the PLO after the establishment of the Palestinian Authority (PA) in the West Bank and Gaza Strip in 1993. This would hold Hamas accountable. Yet mobilizing the diaspora raises questions about Hamas' relationship with neighboring countries and its political and security readiness for this effort.”

Hamas' five priorities are consistent with its political document issued in May 2017, through which it approached new regional and global capitals, albeit with no tangible results.

The priorities focus on armed resistance because Hamas’ advanced armament capabilities in the Gaza Strip turned it from an organization fighting guerrilla wars to a semi-regular army, which could deter Israel from attacking it.

Mahmoud Mardawi, a member of the Hamas National Relations Office, told Al-Monitor, “Hamas sees these five priorities as the backbone of its project to be liberated from Israel. They mainly aim to strengthen Hamas’ military structure, bring all factions around a round table, and engage them in taking national decisions and integrating the Palestinian diaspora of more than 8 million out of 13 million Palestinians. This is in addition to promoting ties with allies and friends who support us wherever we are.”

The Hamas talk about mobilizing Palestinians abroad raises an important question about its inability until now to mobilize its popular bases in the West Bank. This is despite Hamas members there facing extensive and continuous campaigns of arrests by Israel and the PA. If the PA and Israel are clamping down on Hamas in the West Bank, will other countries of the region give it a break?

Palestinians abroad are concentrated in neighboring countries. But Syria’s relationship with Hamas is strained as the Syrian regime accuses Hamas of supporting militants fighting against it — an accusation Hamas denies. Lebanon is battling security and economic instability due to the recent protests. The movement's relationship with Jordan is at a standstill. Jordanian King Abdullah II decided in 1999 to ban Hamas in the kingdom and deport a number of its leaders to Qatar, with sporadic contacts being made from time to time. Egypt will not allow Hamas to communicate with the Palestinians residing in its territories, fearing attacks against Israel from Sinai.

Hussam al-Dujni, a political science professor at Umma University in Gaza, told Al-Monitor, “Hamas solidified its political position by listing these five priorities within its strategy. But talking about these priorities, especially the part about armed resistance and mobilizing the Palestinian diaspora, in the media could negatively affect Hamas.”

Dujni added, “Talking publicly about reinforcing Hamas’ military structure as a priority goes against regional and international efforts to disarm Hamas and limit its resistance against Israel to peaceful and nonviolent activities. This could be exploited negatively by Israel against Hamas.”

He said talking about mobilizing the Palestinian diaspora may harm it. “There is a difference between involving Palestinians abroad in the national struggle silently so as not to affect their situations in their countries of residence, and bragging about their involvement in the media.”

Hamas’ five priorities may indicate a clear aspiration to lead the Palestinian national project. It is in an ongoing competition with Fatah, which it currently sees as retreating, especially as Palestinians are gearing up to contest the first Palestinian elections in 13 years.

A new political scene could unfold that gives Hamas the opportunity to achieve its priorities if it can overcome the obstacles that hinder them.