Despite a lack of evidence of political affiliation of the attackers, the acts of violence against Israeli soldiers and settlers in the West Bank are raising concerns about possible involvement by Hamas. 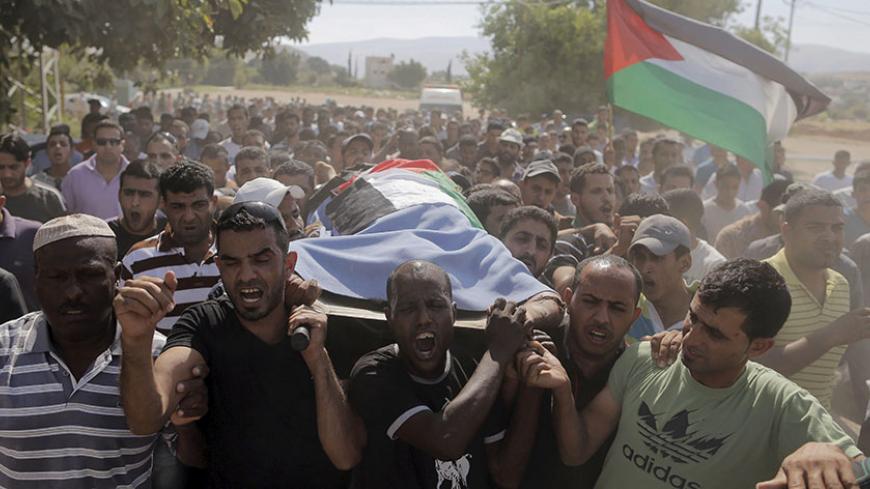 Mourners carry the body of Palestinian gunman Hamad Romaneen during his funeral near the West Bank city of Jericho, June 26, 2015. - REUTERS/Ammar Awad

There has been a security escalation in the West Bank since early 2015 between the Palestinians and the Israeli army. Attacks by individuals are prevailing after organized military resistance degenerated. Israeli and Palestinian security efforts have largely thwarted armed Palestinian operations against Israeli targets in the West Bank, Jerusalem and Israel.

The Palestinian and Israeli security services are making wide-scale arrests of anyone suspected of planning armed operations. The two parties are exchanging intelligence to deter any attempt by Palestinian factions to ignite the West Bank and push it into a confrontation with the Israeli army.

The latest Palestinian attack came on the evening of June 29, when Palestinians shot and injured four Israelis near Shafout Raheel settlement, north of Ramallah.

On June 27, an Israeli vehicle was shot near Beit El settlement in the central West Bank. No injuries were reported.

According to statistics issued by the online Palestinian Dialogue Forum, which has ties to Hamas, several types of attacks by Palestinians against Israelis took place in the West Bank between May 21 and June 10, including the throwing of Molotov cocktails, other explosive devices and stones, as well as stabbing and vehicular attacks, all resulting in injuries to Israeli soldiers and settlers.

No Palestinian factions have claimed responsibility for these operations, which seem to be lone wolf attacks. No organization appears to be behind them nor any cells planning them, as they do not require logistical preparations or organizational arrangements.

Most of the perpetrators succeeded in carrying out the attacks against Israelis and withdrawing from the scene without leaving behind any evidence of their political affiliations. This suggests that some of these attacks, such as the shootings and planting of explosive devices, required military and security planning, particularly since some of these attacks were carried out in the center of the West Bank, despite the intensive Palestinian and security deployment and the networks of collaborators monitoring those linked to Palestinian armed groups.

Husam Badran, Hamas spokesman and former commander in the West Bank, told Al-Monitor, “The Israeli practices against Palestinians in the West Bank, be they killings, arrests or settlement, require firm responses, not ongoing security coordination between the Palestinian Authority [PA] and Israel. Rather an escalated resistance against the Israeli army and settlers in all demarcation areas.”

Badran added, “The spirit of the resistance in the West Bank is increasingly developing, and it will not be affected by the Israeli sanctions, such as arrests, destruction of houses and imposing fines on the perpetrators and their families. If it were not for the security coordination between the PA and Israel, they would have used weapons and bullets, rather than traditional tools, such as knives.”

On June 20, Palestinian factions including Hamas, Islamic Jihad and the Democratic Front for the Liberation of Palestine gave their blessing to the individual operations against the Israelis in the West Bank and called for turning them into a mass uprising.

The Israeli military announced June 28 that it thwarted an armed operation that a Palestinian girl was sent by Hamas to conduct. She was arrested while allegedly trying to enter Israeli territory near the northern West Bank city of Qalqilya, and a shotgun found on her was intended to be fired at Israeli targets.

On June 28, Hamas denied this Israeli narrative, describing the announcement as lies and a cheap shot to distort Hamas’ image.

In Qalqilya in April, the Israeli Shin Bet arrested an armed cell of six Palestinians who threw locally made explosive devices and Molotov cocktails at military targets and settlements in the West Bank.

On June 26, Israel decided to move forward with the draft law proposed by Justice Minister Ayelet Shaked in late May that would impose harsher sentences on Palestinian stone-throwers of up to 20 years in prison.

The Israeli legislation is an expression of escalating Israeli discontent at the daily attacks against settlers.

Nader Sawafta, a Hamas leader in the West Bank, told Al-Monitor, “The stone-throwing practices have become a significant threat to Israeli security. The expansion of the confrontation areas in the West Bank and increase in the number of injured settlers have prompted Israel to enact deterrent laws. This is because by nature, the Israeli occupation has a constant feeling of fear and discomfort, which has caused it to constantly intensify its actions and measures.”

Palestinian writer Yassine Izz al-Din created a Facebook page in early 2015 to provide daily statistics on the ongoing clashes between Palestinians and the Israeli army and Jewish settlers in the West Bank.

Palestinian and Israeli security forces are unable to take any preventive action against these attacks. This is because the firearms used in these attacks are not being intercepted; knives can be purchased anywhere, and it is impossible to identify the car that may turn from a mode of transportation into a deadly weapon in moments.

A Palestinian security official told Al-Monitor on condition of anonymity, “The PA’s security and intelligence analysis confirms that the growing operations in the West Bank in the absence of any political prospects with the Israelis help escalate security tension. It is difficult for the Palestinian security forces to find the perpetrators of the operations, given the lack of any leads.”

He added, "In our periodic meetings with Israeli security officers, they did not hide their fear of the new patterns of these operations, which have begun to grow in the West Bank and Jerusalem. They raised their growing concern about stabbings and attacks against soldiers on the road in a passing car, while the Israeli intelligence services are failing to uncover the operations before they are implemented.”

The security and military campaigns led by the PA and Israel against Hamas since 2007 and up until now have resulted in the arrests of hundreds of the movement’s members, the closing of its institutions and the draining of its funds, greatly weakening Hamas in the West Bank. Despite these intensified Palestinian and Israeli security efforts against Hamas, the recent attacks are a new intelligence threat, represented by individuals unaffiliated with any faction or party but considered dangerous by the Israeli and Palestinian security services. Individual gunmen who are not affiliated with any organization have now replaced the armed operations that have long been conducted by Hamas.

The Israeli army thus placed these attacks at the top of the dangerous operations list, given that the perpetrators are not leaving any trace, have managed to challenge security measures and are thoroughly familiar with the attack scenes.