Joint security efforts in the West Bank between the Palestinian Authority and Israel aim to prevent Hamas cells from instigating strife. 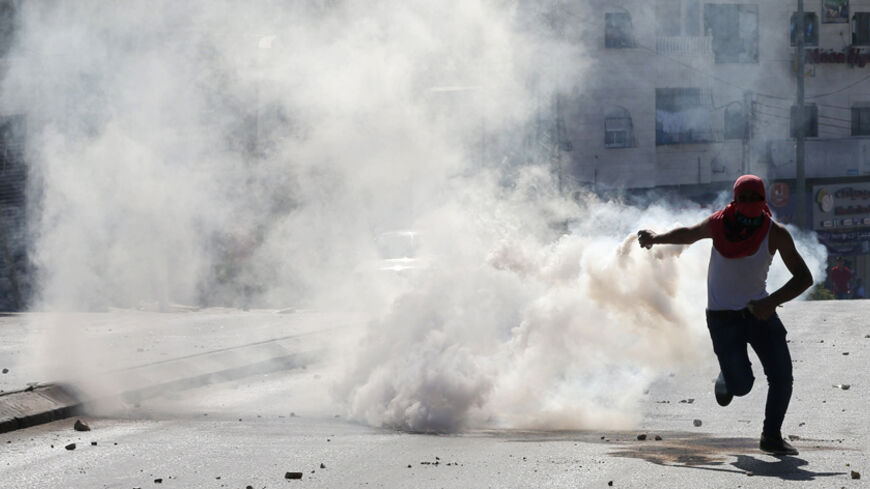 A Palestinian prepares to throw a tear gas canister fired by Israeli troops back to the soldiers during clashes following a gun battle where the troops shot dead two Palestinians, in the West Bank city of Hebron, Sept. 23, 2014. - REUTERS/Ammar Awad

Israel announced the arrest on Nov. 21 of a Hamas-affiliated military cell in the West Bank, which was planning on carrying out suicide bombings against Israeli soldiers and settlers.

The detailed announcement stated that the Hamas-affiliated cell included 30 members, some of whom received military training elsewhere and returned to the West Bank to execute missions against Israel. According to the announcement, such missions included a shooting, a bombing, kidnapping Israelis from both inside and outside Israel, rigging cars with explosives and carrying out an operation inside Jerusalem's soccer stadium.

Hamas did not comment on the arrest. However, Izzat al-Rishq, a member of Hamas’ political bureau, refused to deny or confirm the existence of these cells. He told Al-Monitor, “The resistance has the lead and can ignite a revolutionary mobilization if it has the chance, following the victory it accomplished in the last war on Gaza.”

In an interview with Al-Monitor, Palestinian security services spokesman Adnan al-Damiri ruled out Hamas’ ability to carry out a meaningful operation in the West Bank, since the security apparatus completely controls the West Bank to prevent all armed operations.

Meanwhile, Hamas political bureau member Mahmoud al-Zahar seemed to be the most encouraging official among the Hamas leadership to ignite the West Bank. During a ceremony held by the Islamic Bloc, Hamas’ student wing, in Gaza on Nov. 27, and attended by Al-Monitor, Zahar said that Hamas has a sacred duty to pass on the armed resistance to every inch of the West Bank, and that the movement is betting on the resistance there.

On Nov. 18, Zahar asked for Hamas leadership to be shot in the head if it did not work to pass on the armed resistance experience in Gaza to the West Bank, calling on those he called the free men of the West Bank to follow in the footsteps of the resistance in Gaza.

A Hamas leader in the West Bank told Al-Monitor on condition of anonymity, “Israel’s announcement of the discovery of armed cells affiliated with the movement coincided with an unprecedented arrest campaign launched by the Palestinian security apparatus, which added up to over 200 arrests in November, in addition to the summoning of Hamas members.”

On the eve of Dec. 8, the Palestinian Authority (PA) boosted its arrests and summoning operations of Hamas members in several governorates, arresting 11 residents and summoning nine others, while it continued to detain a number of university students.

On Nov. 28, Hamas announced that Israeli intelligence had arrested two of its most prominent leaders, Hussein Abu Kweik and Fayez Warde, on the eve of Nov. 26 in Ramallah. Hamas further called for the continuation of its rising mobilization in the West Bank.

In tandem with the discovery of Hamas’ military cells, Rishq called on the PA, in a phone interview with Al-Monitor from Doha, to “loosen its security grip over the West Bank, stop the security coordination with Israel and allow the resistance to confront the occupation face to face. Supporting the resistance’s choice and activating it would be the most powerful response to the Israeli attack.”

An article published Nov. 17 by the Hamas-affiliated newspaper in Gaza stated that the discovery of the Hamas cells in the West Bank is a continuation of the Israeli-Palestinian security efforts to destroy Hamas’ structure and impose restrictions on weapons and money to dry up the movement’s resources. Its armed cells were aborted while still in the preparation phase, before they could succeed in carrying out operations, as a result of Israel and the PA’s continuous tracking down of members with military backgrounds who are expected to carry out armed operations.

“Hamas does not need to announce specific roles in the resistance’s action in the West Bank, since it is concerned with pushing the confrontation forward. The attempts to oppress the resistance should not be an obstacle for its continuation,” Osama Hamdan, Hamas’ head of foreign affairs, told Al-Monitor.

"During the past years, Hamas in Gaza went through circumstances tougher than the current ones in the West Bank. It will not give up, but will instead carry on with its course of resistance," Hamdan said. "The upcoming days and months will show that Hamas is deep-rooted in the West Bank, even more so than Israel and the Palestinian security apparatus."

Despite the discovery of Hamas’ cells, the armed attacks against Israeli targets resumed. Most recently, on Dec. 5, a bus of settlers was fired at near the Shilo settlement, north of Ramallah. On the same day, several Molotov cocktails were thrown at an Israeli military tower at the entrance of Arroub refugee camp in Hebron.

A high-ranking Palestinian security official in the West Bank told Al-Monitor on condition of anonymity, “Discovering Hamas-affiliated armed cells means that the movement is racing time to ignite the situation in the West Bank. We will not allow this to happen, whether we reach common objectives with Israel, or whether it is a personal PA decision.”

“Hamas’ strategic decision to continue to form armed cells in the West Bank, despite the discovery, means that it wants to export the Gaza crisis to the West Bank. The movement is well aware that armed operations against Israel might lead to an Israeli military invasion of the West Bank, which would destroy the PA. Is this what Hamas is aiming for?” the official added.

Al-Monitor learned from internal Hamas sources about a position assessment that has been circulating among Hamas cadres in the past few weeks, regarding passing on the armed resistance to the West Bank. It states that “regardless of the accuracy of Israel’s reports concerning the discovery of Hamas-affiliated military cells in the West Bank, portraying the situation as such convinces the public opinion that the West Bank has turned into ‘a hornet's nest,’ and that Hamas is preparing itself to launch numerous advanced armed attacks, which would justify the army’s pounce on the West Bank.”

According to the position assessment, of which Al-Monitor obtained a copy, the West Bank is of strategic importance, and Israel’s plan will be to contain Hamas by intensifying its presence in its cities, arresting activists and forming a network of agents to monitor any movement related to the resistance.

It seems that Hamas is seeking to flare up the situation against Israel in the West Bank. The coming period will likely see further altercations that may involve Hamas cells in the West Bank.