The recent arrests of Hamas members by the PA’s security apparatus in the West Bank has raised concerns that the Palestinian reconciliation might fail and internal division will prevail again inside the Palestinian territories. 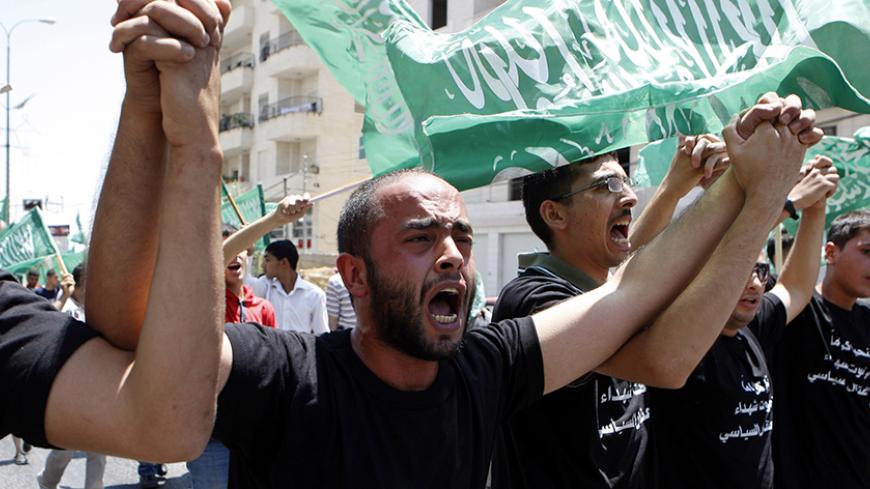 Palestinians take part in a rally calling for the release of Hamas prisoners from the PA-run prisons in the West Bank city of Hebron, July 6, 2012. - REUTERS/Mussa Qawasma

GAZA CITY, Gaza Strip — The Palestinian Authority (PA) security forces launched an unprecedented arrest campaign on July 2 targeting the supporters and leaders of Hamas in West Bank provinces, leading to condemnation by Hamas and other Palestinian factions. Meanwhile, concerns spread that the Palestinian reconciliation would collapse and internal division would re-emerge.

In a press conference attended by Al-Monitor July 7 in Gaza City, Hamas spokesman Abdul Rahman Shadid said that from July 2 to July 7, the number of Hamas detainees arrested by the PA topped 200 individuals — among them 37 university students and 98 former prisoners freed from Israeli jails.

Shadid viewed the arrest campaign as “coming in the framework of a coordinated plan [without mentioning between which parties] aimed at eradicating Hamas and putting an end to all armed resistance.”

He clarified that most detainees were “subjected to severe torture,” indicating that 11 of them had begun an open-ended hunger strike.

The arrest campaign initiated by the PA against Hamas members was met with condemnation and rejection by the Alliance of Palestinian Factions that includes most Palestinian factions, irrespective of ideological affiliation.

On July 4, the alliance organized a student demonstration against the political arrests targeting Hamas members in the West Bank, which the alliance considered to be detrimental to Palestinian reconciliation efforts and to serve no one but Israeli authorities.

Commenting on the subject to Ma’an News Agency July 6, the PA’s security forces spokesman, Maj. Gen. Adnan al-Damiri, revealed that the security apparatus had thwarted preparations undertaken by a 40-member cell “that was uncovered a few days ago in the northern part of the West Bank, and whose members confessed to planning attacks against security forces.”

Damiri further accused Hamas of rejecting the Palestinian reconciliation government and said, “By doing so, Hamas has forsaken reconciliation and is moving toward internal strife.”

Hassan Khreisheh, the second deputy speaker of the Palestinian Legislative Council, denounced the arrests and all the justifications thereto.

He told Al-Monitor, “Damiri’s statements come in the context of fomenting sedition and increasing tension between Hamas and Fatah. They are not based on facts.”

Khreisheh demanded the release of all political prisoners from both sides, to stimulate Palestinian reconciliation efforts. He said that the continuation of these arrests “makes reconciliation a pipe dream.”

Hamas leader Yahya Moussa accused the PA of “betraying the Palestinian people and working against the interests of the just Palestinian cause.”

In reference to the PA arresting former Hamas prisoners when they are released by Israel, Moussa told Al-Monitor, “These unprecedented and ongoing arrests are a deathblow to the reconciliation, which cannot progress in light of the current actions undertaken by the PA in the West Bank. The political arrests carried out by the PA’s security forces against Hamas supporters in the West Bank are coordinated and arranged in concert with Israeli occupation forces — for the PA and the occupation forces have exchanged their military roles against the members of Islamist movements."

He considered the arrests as falling "in the context of preserving the existence and sustainability of the PA, which fears the rise of Islamic movements to decision-making positions, as occurred at university student boards, and during student elections at Birzeit University in Ramallah [in April].”

This claim was quickly denied by the spokesman for the Gaza Interior Ministry, Iyad al-Bazm, who said in a press release issued July 6, “Fatah’s accusation against the Interior Ministry in Gaza of arresting its leaders, are unfounded.” He further characterized those accusations of “mere attempts to distort reality and provide cover for the criminal political arrests being perpetrated in the West Bank.”

In this regard, the secretary-general of the Fatah Revolutionary Council, Amin Maqboul, told Al-Monitor, “These arrests are not political, but motivated by security concerns.” He refused to further expound on the nature of those security concerns.

Maqboul rejected Hamas’ accusations that his movement was sabotaging Palestinian reconciliation with its arrest policy and said, “We must remember that Hamas breached the 2011 Cairo reconciliation agreement when it imposed several impediments to the implementation thereof — among them, not allowing the reconciliation government from governing the Gaza Strip, continuing to impose its control over the Gaza border crossings, and imposing new and illegal taxes.”

Moussa, however, categorically rejected Maqboul’s contention that those arrests were security driven. “These political arrests are solely motivated by Hamas affiliation and have nothing to do with security concerns,” he said. He indicated that the PA was waging an “existential battle” against Hamas in the West Bank, to maintain its grip on power.

The issue of political arrests targeting Hamas members is not new. Hamas accused in a statement issued July 5 the West Bank security agencies of arresting 71 of its members and leaders during the month of June alone, as well as extending the detention period of 15 others and summoning 62 for questioning during the same period.

Political analyst Hassan Abdo told Al-Monitor that political arrests were one of the primary impediments to Palestinian reconciliation efforts. He said, “Today, we are further away from reconciliation than at any other time in history. Reconciliation is no longer achievable by the Palestinian people due to both parties [Fatah and Hamas] breaching the [Cairo] reconciliation agreement."

Abdo stressed that overcoming this deteriorating internal situation necessitates a return to the terms of the reconciliation agreement and the implementation of its provisions. Furthermore, Arab countries are required to intervene in order to put an end to Palestinian divisions, which have cast their ugly shadow upon all aspects of life in Palestinian territories.