Hamas reacts to Abbas’ call for Arab strike against Gaza

Palestinian President Mahmoud Abbas’ call during the Arab Summit for an attack against Hamas in Gaza — similar to the one launched by Saudi Arabia against Yemen — has raised the ire of Hamas figures. 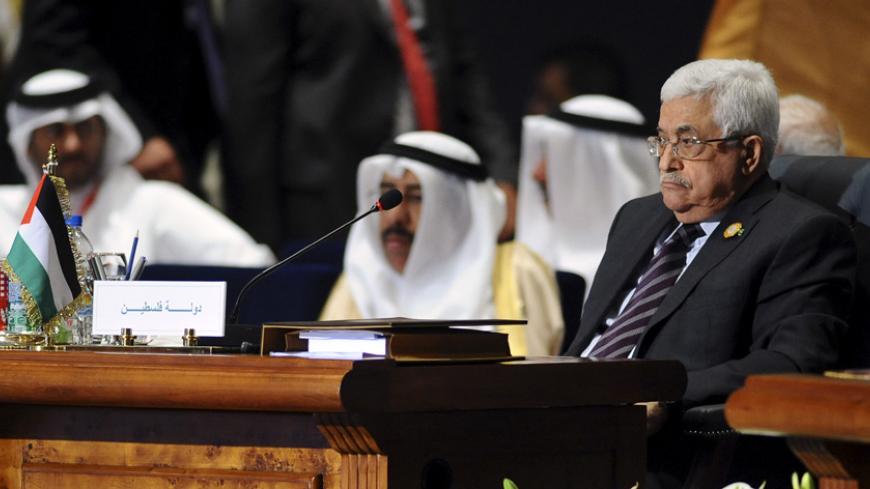 The military operation started March 26 against the Houthis in Yemen was expected to make waves in the Arab region, whether those affected support it, oppose it or have reservations.

However, no one expected Palestinian Authority (PA) President Mahmoud Abbas’ call at the Arab Summit on March 28 for an operation similar to Operation Decisive Storm in Palestine. He asked Arab leaders to solve the Palestinian division the same way as in Yemen. Abbas also accused Hamas of obstructing the reconstruction process, as, according to him, it is impeding the reconciliation government’s role and political legitimacy in the Gaza Strip.

Mahmoud al-Habash, Abbas’ adviser on religious affairs, demanded March 27 that any party without legitimacy — such as the targeted group in Yemen — anywhere be struck with an iron fist, describing the Hamas takeover of Gaza as a coup against the PA.

Palestinians condemned these statements as they recall the bloody events in Gaza in mid-2007 between Fatah and Hamas, during which hundreds were killed and wounded, following the victory of Hamas during the January 2006 legislative elections. The Fatah movement had rejected the results and tried to maintain its control over the Gaza Strip, leading to armed clashes that ended in June 2007 with Hamas’ takeover of Gaza, its expulsion of the PA and the political division that remains until this day.

The PA’s call for an operation in Palestine raised concerns among Palestinians in Gaza, who fear an Arab airstrike and have not yet recovered from Israel bombing them during the last war in July-August 2014.

On March 28, hours after the statements and in the wake of angry reactions, Habash accused some parties without naming them of putting words in his mouth.

Fathi Qarawi, a member of Hamas’ legislative council, told Al-Monitor, “These statements are not acceptable and do not mean anything to the Palestinian people, because the person behind them is expressing a latent hatred against Gaza.”

Meanwhile, the vice president of Hamas’ political bureau, Mousa Abu Marzouk, said March 29, “Are Abbas and his adviser calling on Arabs to launch a war against Gaza? Which legitimacy are they seeking to implement: the legitimacy of the occupation of the West Bank, or the legitimacy of Gaza’s siege?”

Hamas’ responses reflect its anxiety in the days following the statements by Abbas — the sole decision-maker — in an official speech that was aired live for the whole world to see during the Arab Summit.

The group was not to be the only one to denounce Abbas' statements, as some other political forces, such as Islamic Jihad, rallied behind Hamas to convey popular and official rejection of the call.

Hamas organized a mass rally for March 29 in the Jabaliya refugee camp to condemn Abbas’ statements. Al-Monitor attended a part of the demonstration, during which Mushir al-Masri, the spokesman for Hamas’ parliamentary bloc, threatened anyone who tries to attack Gaza while rejecting Abbas’ incitement and his threats of a joint Arab force against Gaza.

Hamas is aware that any Arab military intervention would be preceded by security and operational coordination with Israel, which controls Gaza’s land, sea and air. This way, any Arab operation might lose its legitimacy among the Arab public and deprive it of the kind of public support that the military operation in Yemen enjoys.

However, Hamas spokesman Sami Abu Zuhri told Al-Monitor, “Abbas' statements and calls for launching a war similar to the one in Yemen against the Palestinian people is extremely dangerous and unpatriotic, as they go in line with the occupation’s wishes.”

The strongest Hamas reaction to Abbas’ statements came from Khalil al-Hayya, a member of Hamas’ political bureau, on March 31. He said that Abbas does not represent the Palestinian people by calling on the Arabs to attack Gaza, and it’s time for him to pack his bags and leave.

Despite the intensity of Hamas’ reaction, the movement seems reassured that such a move will not happen. Hamas is working on a rapprochement with Saudi Arabia, which is leading the military alliance in Yemen, and it would not be reasonable for Riyadh to turn against the movement and support Abbas' call to fight Hamas.

Hamas issued a formal position on March 28, expressing its support for the military operation in Yemen in an effort to shore up its legitimacy. However, Hamas is not convinced that this position will stop an Arab attack against it, as long as a reconciliation with Fatah through a political dialogue is not achieved and the accusations against Hamas of obstructing the government continue.

The secretary of Fatah’s Revolutionary Council, Amin Maqboul, tried on March 29 to attenuate Abbas’ statements, saying that the president’s intentions were to provide an Arab sponsorship for the reconciliation and to intervene to end the division, and not to recreate the Yemen operation in Gaza.

Habash was a Hamas member before the movement dismissed him in the mid-1990s and occupied leadership positions in the PA in the eras of Presidents Yasser Arafat and now Abbas. He has also been appointed minister of endowments and minister of agriculture. Habash is currently serving as supreme judge.

Hamas is aware that Habash does not speak for himself, as he belongs to Abbas’ narrow circle and accompanies him on most of his trips abroad. He is quite familiar with Abbas’ internal arrangements and his relations with Hamas.

Meanwhile, Fatah seems to fear that Habash will use Fatah to settle his scores with Hamas, and show Fatah as a movement that employs foreign parties against its own people in Gaza. Al-Aqsa Martyrs Brigades’ leader Majdi Matar attacked Habash on March 28, demanding Abbas expel him from the PA.

Mohammed Nazzal, another member of Hamas’ political bureau, told Al-Monitor, “There was an intentional synchronization between Abbas’ call at the Arab Summit against Hamas and the visit of Prime Minister Rami Hamdallah to Gaza on March 25. The purpose of this was to show that Hamas was the one disabling the reconciliation.”

Abbas' statements were an unpleasant surprise for Hamas during the slow steps toward reconciliation with Fatah. Hamas fears that the success of the military operation in Yemen could encourage some Arab countries to repeat the operation against the movement in Gaza. These statements seem to be further impeding the Palestinian reconciliation and have indeed increased mistrust between Hamas and Fatah.