Hamas is seeking a rapprochement with Saudi Arabia to improve its leverage in Palestinian reconciliation talks, which might not please Egypt, which has long brokered the discussions, or Fatah leader Mahmoud Abbas. 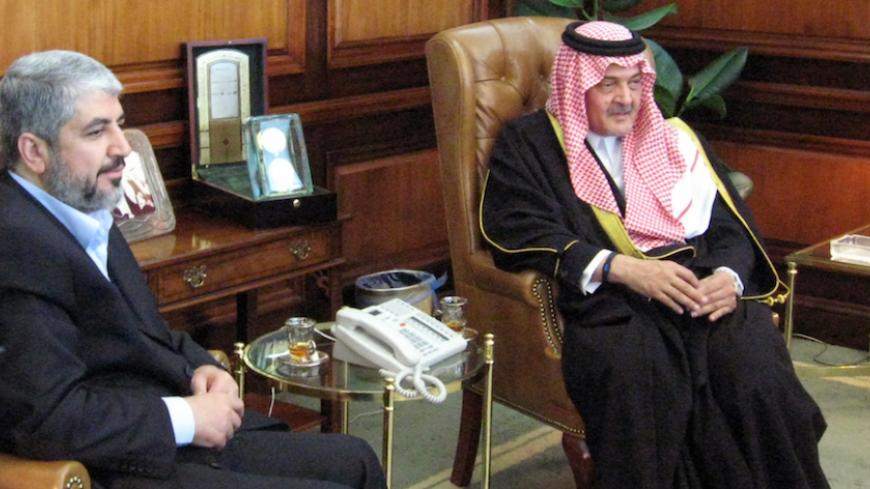 Despite the tensions plaguing Hamas’ regional relations, including its ruptures with Egypt and Iran, the movement continues in its effort to overcome its current isolation, which is exacerbated by the actions and policies of Israel, the Palestinian Authority (PA) and others in the region. In this regard, Hamas is seeking a rapprochement with Saudi Arabia, hoping to move beyond the deadlock that characterized relations during the reign of the late King Abdullah.

In early May, Hamas called for Saudi intervention in its stalled reconciliation talks with Fatah. Ali Baraka, Hamas’ representative in Lebanon, said on May 5 that Khaled Meshaal, head of the Hamas Political Bureau, had contacted King Salman bin Abdul-Aziz Al Saud in late February to discuss the kingdom's support of Palestinian reconciliation, reconstruction in Gaza and lifting of the Gaza blockade. Ismail Haniyeh, deputy head of Hamas’ Political Bureau, had said on May 1 that Riyadh is working to bring about a new reconciliation agreement between Hamas and Fatah. Meanwhile, arrangements are being made for a Hamas delegation to visit Riyadh.

By encouraging a Saudi role in Palestinian affairs, Hamas is hoping not only to gain the kingdom’s backing to end the siege on Gaza and the split with Fatah, but also to restore relations with Egypt. The movement continues to suffer from a severe financial crisis. When Hamas refused to lend its support to the Syrian regime in the face of the popular revolution, financial backing from Iran came to a halt, in late 2011.

Efforts to restore ties have been difficult, with Iran imposing strict conditions on their resumption. The Iranians asked Meshaal not to try to meet with Supreme Leader Ayatollah Ali Khamenei during a planned (but eventually postponed) visit to Iran. Tehran has also insisted that Hamas apologize for supporting the Syrian revolution and to announce support for the Syrian regime. Given its ongoing troubles with Iran, Hamas is thus probably hoping to secure Saudi support to alleviate the dire economic situation plaguing Palestinians in Gaza.

In approaching the Saudis, Hamas is following in the footsteps of other Arab politicians currently courting Riyadh. The new regime has proved, in a short period of time, its willingness to take the initiative in the region, having launched a military campaign against Houthis in Yemen, taken a firm position against Iranian influence and provided consistent support to the Syrian revolutionaries in Syria opposed to the Bashar al-Assad regime.

Ismail al-Ashqar, head of the security committee in the Palestinian Legislative Council, told Al-Monitor, “Hamas wants a new Mecca agreement involving all Palestinians separate from the bilateral agreements between Hamas and Fatah.” The Mecca agreement was signed in Saudi Arabia Feb. 8, 2007, to halt fighting between Fatah and Hamas, following Hamas' victory in 2006 legislative elections, and form a national unity government. The agreement failed because of chaos in the PA security apparatus in Gaza and obstruction of the work of the Hamas government. Several Hamas members were killed and wounded in incidents.

Amin Maqboul, secretary-general of Fatah’s Revolutionary Council, accused Hamas on May 3 of involving Saudi Arabia in the Palestinian relationship with the aim of neutralizing Egypt. Maqboul said that Riyadh had not contacted Fatah to put forth a reconciliation initiative.

Ashqar stated, “The Saudi role welcomed by Hamas is no substitute for Egypt’s role in ending the division, because Egypt has always hosted Palestinian dialogues.” Amid the Saudi-Hamas rapprochement, Mohammed Dahlan, a former senior leader in Fatah, arrived in Cairo May 3 to discuss the consequences, that is, potential drawbacks, of closer relations between Hamas and Riyadh.

Hamas’ desire for a Saudi role is indeed linked to its strained relationship with Egypt, although the Egyptian media campaign against it has more or less ceased, and Hamas leaders made some conciliatory remarks toward Cairo in late April.

Breaking Egypt’s monopoly on the Palestinian file by letting Saudi Arabia take part would give Hamas more leverage in its reconciliation demands, because Egypt openly supports the PA. Senior Hamas leader Salah Bardawil told Al-Monitor, however, “Hamas’ support for the Saudi role aims at providing a political and financial safety net to achieve reconciliation. It does not contradict the Egyptian role, but reinforces it.”

Hamas’ support for the Saudi role also stems from its view of the importance and stature of the kingdom. In addition, it senses that the region is on the verge of significant shifts, and a new regional map is beginning to take shape. Hamas does not want to be left out in the cold. Hence the movement’s March 28 statement in which it did not condemn the Saudi-led "Operation Decisive Storm" against the Houthis in Yemen. Hamas, which has close ties to Qatar, also feels a sense of reassurance in the new relationship between Qatar and Saudi Arabia.

The thaw between Hamas and Saudi Arabia angers the PA, with several factions close to the authority declaring their rejection of a Saudi role in a reconciliation May 4. It appears that the PA was content with Hamas’ isolation in its Gaza “prison.” Officials did not hide their annoyance when Hamas began working to lift its political siege by reaching out to countries in the region, particularly Saudi Arabia, which is exploiting the decreased role of Egypt in the area by filling the void.

Hamas is well aware that President Mahmoud Abbas cannot oppose a role for Riyadh in the Palestinian dossier given the Saudis' influence in the region. Abbas has therefore instructed PA spokespeople to focus on Egypt’s role, to win over Cairo and keep the Saudis in check.

Another sign of Abbas' displeasure with the situation had surfaced March 28, when he called for Arab League military action against Hamas in Gaza, on the ground that Hamas' rule over the territory resulted from a coup. The use of military force was therefore a justifiable means of restoring legitimate, PA rule over Gaza, mirroring the rationale for the intervention in Yemen. Hamas condemned Abbas' calls, considering them the prelude to a Palestinian civil war.

A member of the Saudi Majlis al-Shura [Consultative Council] told Al-Monitor on condition of anonymity, “Riyadh will heed Hamas’ calls for reconciliation because it wants to entice the movement and block the road to Tehran, which might open up again to Hamas, despite the current tensions in relations between the parties [Hamas and Iran]. Riyadh’s attempts to restore its relationship with Hamas coincided with a change in its foreign policy and its search for a grand coalition to confront the Iranian tide in the region. King Salman considers this one of his political priorities.”

Jamal Khashoggi, a Saudi political writer close to decision-making circles in Riyadh and head of the al-Arab news channel, on May 4 spoke optimistically on Al Jazeera about Hamas and said that it represents a broader segment of the Palestinians than the PA. His words are uncommon coming from a politically well-connected Saudi.

Saudi Arabia’s growing influence in the region prompted Hamas to try to engage it in the reconciliation process. Hamas, however, is not confident that Egypt will willingly allow the Palestinian dossier to be removed from its hands or shared although Cairo has been unable to exert its influence on the Palestinians or constructively engage Hamas to improve the devastating living conditions in Gaza. At the same time, Hamas is also very aware that the closer the ties it develops with Saudi Arabia, the further it moves away from Iran.