A Hamas delegation recently visited Saudi Arabia to bolster relations between both parties, as Iran fumed. 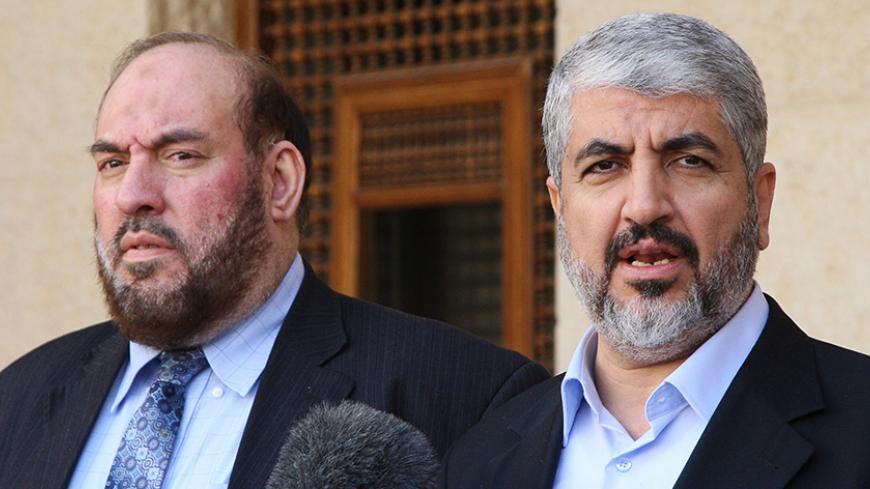 Hamas leader Khaled Meshaal (R) and Mohammad Nazal, a member of the Hamas leadership, speak to media after their meeting with Jordan's King Abdullah at the Royal Palace in Amman, Jan. 28, 2013. - REUTERS/Majed Jaber

Without prior notice, Khaled Meshaal, the head of Hamas’ political bureau, arrived in Riyadh on the evening of July 15 for a two-day visit, accompanied by fellow bureau members Mousa Abu Marzouk, Mohammad Nazal and Saleh al-Arouri. This was the first such visit by a Hamas delegation in three years, after the movement’s last to Riyadh in June 2012.

Al-Monitor learned the details of Hamas’ talks with Saudi Arabia from a number of delegates and their assistants, who spoke on condition of anonymity. One delegate noted, “Meshaal and his colleagues had discussed with Saudi officials the development of the relationship between [Hamas and Saudi Arabia], which has seen in recent months a positive and gradual improvement. Hamas showed serious interest in bringing the Saudi role back into the Palestinian arena, to bring together Fatah and Hamas’ views, as Hamas also updated Saudi Arabia on the developments of the truce with Israel.”

Hamas’ visit to Riyadh had immediate effects on the ground. On July 18, an unspecified number of Hamas detainees were released from Saudi prisons. They had been arrested in December 2014 after collecting money for charities with ties to Hamas.

Al-Monitor learned from Hamas sources that Hamas timed its trip to Saudi Arabia carefully and made secret arrangements months ago. The movement waited for the right opportunity to receive the Saudi invitation that came in light of the rapid developments in the region, namely the Iranian nuclear deal and the gradual development of a positive relationship between Hamas and Egypt, according to the deputy chairman of Hamas’ political bureau, Ismail Haniyeh, in April. Meanwhile, the Palestinian internal reconciliation remains deadlocked.

Ismail al-Ashqar, head of the Interior and Security Committee of the Palestinian Legislative Council and Hamas leader, told Al-Monitor, “Hamas is committed to Saudi Arabia’s leading role in the region and looks to Saudi Arabia as an indispensable Arab force. Meshaal’s visit to Riyadh will not be the last, and there will be several meetings in the upcoming period to invest Saudi efforts to support the Palestinians and lift the blockade on Gaza. [These meetings] will also aim at Saudi Arabia sponsoring the reconciliation between Fatah and Hamas with Egypt’s support.”

The Palestinian Authority (PA) carefully monitored Hamas’ visit to Saudi Arabia. On July 20, Nabil Shaath, a member of Fatah’s Central Committee, expressed his hope that the visit would push Hamas to abandon its independent project in Gaza of separating from the West Bank.

Al-Monitor contacted a Palestinian official, who requested anonymity, in the headquarters of the Palestinian presidency in Ramallah for his impressions about Hamas’ visit to Saudi Arabia. He said Ramallah was very worried, fearing that Hamas would succeed in what it saw as a diplomatic maneuver with Saudi Arabia, from which Hamas and the kingdom could further their mutual interests, making the PA the biggest loser in this deal, the details of which are yet to be revealed.

A Palestinian minister told Al-Monitor on condition of anonymity, “There are preliminary arrangements for an upcoming visit by President Mahmoud Abbas to Saudi Arabia in early August to discuss the results of Hamas’ visit. The Palestinian leadership is convinced that the Saudi role is supportive of all Palestinians, without being biased for one faction at the expense of the other.”

The Iranian media waged a relentless campaign against Hamas visiting Saudi Arabia. Fars News Agency claimed July 19 that Saudi Arabia asked Hamas during its visit to participate in the fight against the Houthis in Yemen by committing 700 of the movement’s fighters. Hamas spokesman Sami Abu Zuhri refuted these allegations on the same day, claiming that Iran aims to discredit the successful visit of the Hamas delegation to Saudi Arabia as well as incite anger against the movement.

Hamas’ talks in Saudi Arabia raised the issue of the movement’s position regarding Iran, in light of the sharp polarization between Tehran and Riyadh. The Saudi leadership might have been hoping to hear news of a formal rupture between Hamas and the Iranians, in order to rally the largest possible number of allies to counter Iranian expansion. However, it seems Hamas is not yet considered an official member of the alliance that Saudi Arabia is trying to establish to confront Iranian influence in the region.

Meshaal announced July 23 that his visit to the kingdom is a step on the right path and that Hamas does not let go of anyone, yet at the same time it does not get involved in the game of axes in the region.

A high-ranking Hamas official told Al-Monitor on condition of anonymity, “Hamas’ position in Saudi Arabia was clear; the movement is with any party that provides support for it in confronting Israel, because it is a Palestinian national liberation movement concerned with finding supporters without any prior political conditions. Hamas also brought a clear message to Saudi Arabia that its policy is steady in its regional and international relations, and it will not establish a relationship with Saudi Arabia at the expense of Iran, nor will it converge with Iran against Saudi Arabia. The coming period could witness political moves — whose nature remains unknown — by Hamas to confirm this policy.”

On July 21, Khalil al-Hayya, a member of Hamas’ political bureau, confirmed this position when he asked the Arab and Islamic countries to support the resistance in Gaza without imposing a political price, as Hamas maintains its balanced relations with all countries.

Meanwhile, Ziad al-Zaza, another member of Hamas’ political bureau, told Al-Monitor, “Hamas’ visit to Saudi Arabia sought to make the relationship between the two as strong and positive as it was before. One of the prominent results would be to rebuild the relations between both parties in a way that would promote Saudi support for the Palestinian cause.”

Regardless of what was discussed during Hamas’ visit and despite the media silence on its results, it seems Hamas accomplished a great diplomatic achievement, as it looks to Saudi Arabia as the head of Arab diplomacy and leader of joint Arab action. Thus, its convergence with Riyadh means ensuring the support of most Arab Gulf states and trusting Saudi Arabia’s ability to ease tension between Hamas and countries such as Jordan and Egypt.

Arouri, who was part of the delegation to Saudi Arabia, said July 27 that the movement will make another visit to the kingdom soon, without specifying when, to resolve the issues discussed with Saudi officials.

At the same time, Hamas seems keen not to provoke the wrath of Iran following the visit. The movement did not respond overtly to the Iranian media campaign against it, and rather merely commented calmly on it to preserve its relations with both Tehran and Riyadh, the main rivals in the region. This task, however, is a difficult one for Hamas.