As Hamas offers its condolences for the death of the Saudi king, it seems to be using "funeral diplomacy" as an opportunity to re-establish ties with the Gulf state. 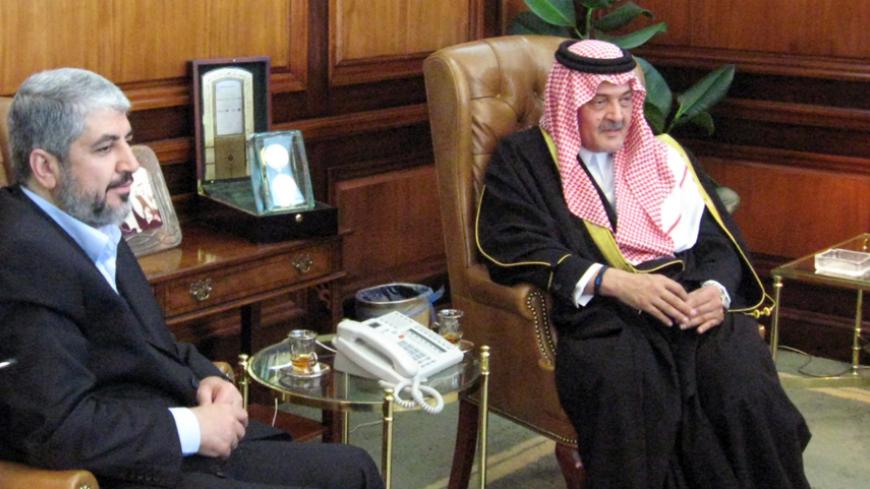 On the evening of Jan. 25, Hamas leader Khaled Meshaal offered his condolences to Majid al-Hassan, adviser to the Saudi Embassy in Qatar, and praised the Saudi role in supporting the Palestinian cause. The same day, a Hamas delegation headed by the movement’s representative in Lebanon, Ali Baraka, offered its condolences to the Saudi ambassador in Beirut, Ali Asiri.

Hamas seems to see the Saudi king's death as an opportunity to renew its ties with Saudi Arabia, which have been marred by tension and distance in recent months. This warming falls within the movement’s plan to benefit from "funeral diplomacy" in the Middle East to try to break the blockade imposed on it by the surrounding countries.

Hamas probably showed solidarity with Saudi Arabia on this sad occasion because Riyadh enjoys political and economic influence in the region and has powerful ties with Cairo and Washington.

Hamas’ internal circles seem optimistic about the new king, hoping the change in leadership will lead to a positive change in Saudi Arabia’s regional policy toward Hamas. Al-Monitor learned that the Hamas leadership has maintained good relations with Salman's half-brother Crown Prince Muqrin since he served as director general of the Saudi Intelligence Agency.

Hamas spokesman Hussam Badran told Al-Monitor in a phone interview from Doha that Saudi Arabia's regional role cannot be overestimated, saying, “Hamas is always keen on preserving positive relations with Saudi Arabia, given its central diplomatic and political role and its financial support to the Palestinian people.”

Badran said, “Hamas hopes the new Saudi rule headed by Salman draws a policy giving the Palestinians stronger support,” adding, “The Saudi policy has always been keen to achieve the aspirations of our people and to support our cause.”

However, senior Hamas leader Mahmoud al-Zahar clearly explained Jan. 27 that Saudi Arabia is likely to make changes to its policies in light of the Houthis’ control in Yemen, the oil-price fluctuations, the events in its eastern region, the failure of the Palestinian negotiations, the US position toward Israel and the instability of some of the region's regimes. These complicated factors will force Riyadh to form specific alliances that Zahar did not clarify.

A former member of the Saudi Shura Council close to the decision-making circles in Saudi Arabia told Al-Monitor in a phone interview on condition of anonymity, “Hamas’ optimism toward the new rule in Riyadh may be justified, especially since King Salman will be interested in mending several strained Saudi relationships in the region, including with Hamas. Yet, this will not necessarily happen overnight.” He added, “Hamas and Saudi Arabia still have time to get to know the nature of the new policy governing their relationship. The king has a packed regional and international agenda, and Hamas may have to narrow the circle of its adversaries and enemies before gaining new allies and friends in Riyadh. It has the right to do so, but it is still early for that now.”

Hamas' allies also went to Saudi Arabia to offer condolences for the death of Abdullah, namely Turkish President Recep Tayyip Erdogan and Qatari Emir Sheikh Tamim bin Hamad Al Thani. On the other hand, Hamas’ opponents such as Egyptian President Abdel Fattah al-Sisi and the UAE princes made no appearance. The latter had visited Saudi Arabia on Jan. 24, but were not present for the funeral service and procession, against Arab customs. Does their absence imply a negative shift in Saudi policy toward Egypt that could reflect positively on Hamas?

“There is no doubt that Hamas’ ties with Cairo in the recent stage are not up to our expectations," Badran noted. "Hamas has repeatedly demanded its name not be dragged into Egyptian internal events, and we welcome any Saudi move that improves Hamas' relations with all parties, since it is not part of any Arab dispute.”

He added, “Hamas hopes the new rule in Saudi Arabia plays a positive role in easing the blockade on Gaza, as it has the capacity to play this required role.”

Another factor encouraging Hamas to mend its relationship with Saudi Arabia may be the growing tension in the movement’s relations with Egypt, especially after the recent events in the Sinai Peninsula and the Jan. 31 Egyptian judicial decision to list the Izz ad-Din al-Qassam Brigades as a terrorist organization. Hamas will need a high caliber regional mediator like Saudi Arabia to calm the confrontation with Egypt, since Hamas knows that Riyadh has considerable political and economic influence over Cairo.

In the same context, questions are being raised about the continuing steady rapprochement between Hamas and Iran and the movement’s desire not to provoke Saudi Arabia, whose relationship with Iran has grown more tense concerning Syria, Yemen, Bahrain and Lebanon.

Badran confirmed, “Hamas’ regional relations are not based on a rapprochement with a given party at the expense of another. It does not want a relationship with Iran at the expense of Saudi Arabia. The movement does not take part in [regional] axes. We welcome any relationship that serves our national political project.” He added, “Hamas believes it could get closer to Iran and Saudi Arabia at the same time, since the Palestinian cause can bring together regional parties regardless of their differences on other regional issues. Hamas hopes Iran, Saudi Arabia and other countries have the will and desire to support the Palestinian people.”

Al-Monitor was granted access to a recent internal position report drafted by Hamas, but not published in the media. The report stated, “Hamas realizes that a rapprochement with Saudi Arabia and the transition from cold and distant relations to warm and close relations is not easy. The movement knows that Riyadh has close ties with Washington and that there is coordination between them on regional affairs. At the same time, Saudi Arabia is a major supporter of the Palestinian Authority [PA], which is witnessing substantial disputes with Hamas.”

Hamas’ clear desire to improve its relationship with Saudi Arabia under its new rule will surely lead it to consider Saudi demands such as reconciliation with the PA, easing tensions with Egypt and not rushing into a normalization of relations with Iran.