How Hamas is looking to boost foreign ties

In an exclusive interview with Al-Monitor, Hamas' foreign relations chief Osama Hamdan revealed that the movement's leadership met a delegation of European diplomats and expressed optimism toward Hamas' future standing in Europe. 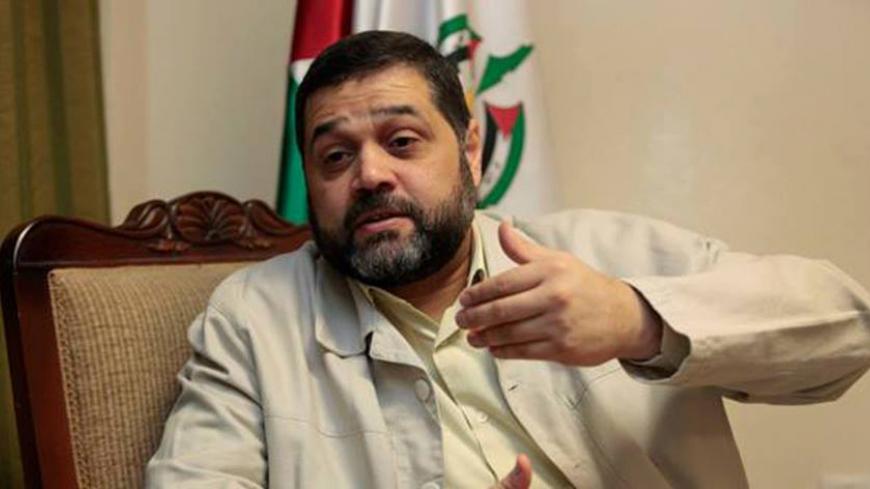 The former representative for Hamas in Iran and Lebanon, Osama Hamdan, Aug. 17, 2014. - Facebook/dailystarnews

In an exclusive interview with Al-Monitor, Hamas' foreign relations chief Osama Hamdan revealed that several weeks ago in Qatar, the movement's leadership met a delegation of high-ranking European diplomats. He expressed optimism about a European decision to strike Hamas from its list of terrorist organizations.

In a telephone interview from Beirut, Hamdan, one of Hamas’ emerging political leaders, said the movement seeks to mend ties with Iran after they had significantly deteriorated in recent years. He discussed the frosty relations between Hamas and Saudi Arabia and revealed that a Hamas leadership delegation is getting ready to visit Egypt soon.

The text of Al-Monitor’s interview with Hamdan, a former Hamas representative in Iran and Lebanon, follows:

Al-Monitor:  Twenty-nine years after of the founding of Hamas, would you give us a brief overview of its regional and international relations?

Hamdan:  Hamas is keen to maintain balanced and open relations at the regional and international levels. It has succeeded over the past three decades since its founding in 1987 to establish channels of communication with several Arab, Islamic and Western states. It now has a wide network of political and diplomatic relations, but the United States has exerted pressure on many countries, influencing them not to cooperate with Hamas’ efforts to build relations.

Hamas today has a good communications system, including many countries other than Arab and Islamic countries. It has relations with the Russian Federation, Brazil in Latin America, Nigeria and South Africa on the African continent and China, Malaysia and Indonesia in Asia. On the European continent, Hamas has strong ties with Switzerland and Norway. It also has good ties with three other European countries that prefer not to be open about this relationship to avoid any embarrassment with Washington.

Al-Monitor:  How do you assess Hamas' current relationship with Egypt? What is the movement’s position on the recent bombings in Egypt?

Hamdan:  Hamas has condemned all bloody attacks in Egypt, most recently the [Dec. 11] bombing of the Saint Peter and Saint Paul Church. We believe the attacks are a crime against innocent people and acts of aggressions on our brotherly Egyptian people. This is Hamas' unwavering position. The negative outcomes of any harmful acts against Egypt are not limited to Egypt but extend to other Arab countries. The Palestinian people are affected by these acts.

It has become clear to Egypt’s political and security authorities that Hamas had nothing to do with Egypt’s hardships and ordeals in recent years, opening the door to a stable relationship between them. Serious measures and arrangements are underway for a visit by a senior Hamas leadership delegation to officials in Cairo in the coming weeks. We heard that Egyptian officials have hailed this imminent visit.

Al-Monitor:​  The advent of King Salman bin Abdul-Aziz Al Saud to power in Saudi Arabia in January 2015 boded well for Hamas. Optimistic statements were issued on the improvement of the relationship following a Saudi-Hamas meeting in Mecca in July 2015. But soon after, relations became frosty. Why was that? Are there any planned visits by Hamas to Saudi Arabia in the near future?

Hamdan:  Hamas welcomed the advent of King Salman bin Abdul-Aziz to power in 2015 based on its desire to consolidate its relationship with Riyadh. But the relation between the two soon went back to ground zero. Hamas is not responsible for this. Although Hamas wants positive relations with Saudi Arabia, there are no arrangements for any upcoming visit by the movement to Riyadh. Perhaps the relationship with Hamas is not a priority for Saudi Arabia in light of its internal and external preoccupations.

Al-Monitor:  Hamas’ relationship with Iran is shaky. Sometimes they converge and exchange secret visits, only to grow cold again. What about the relationship with Tehran and its continuing financial and military support for the movement?

Hamdan:  Iran has provided significant support to the Palestinian factions, including Hamas, but the relationship between us in recent years has become somewhat frosty due to developments in the Arab States since 2011, without reaching total disruption. During the Israeli war on Gaza in the summer of 2014, Hamas and Iran’s relationship improved. Both sides agreed that the developments in the region should not affect our relationship. There has been a steady improvement, despite some differences that I will not discuss right now. Iran's military and financial support to Hamas has not stopped, and we hope it will be increased.

Al-Monitor:  Can we say that Hamas' alliance with Turkey has been undermined following the Israeli-Turkish agreement to re-normalize relations between them in June 2016, or will Turkey play a role in a prisoner-swap deal between Hamas and Israel and in easing the blockade imposed on Gaza?

Hamdan:  Hamas does not accept any normalization with Israel, because this weakens our position as Palestinians against Israel. We call on all countries to exert pressure on Israel and not to normalize relations with it. But if Turkey believes that its relationship with Israel can serve the Palestinian cause, then Hamas welcomes the normalization agreement.

Regarding a swap deal, up to now Israel has not shown any serious sign of its intention to propose a deal. Hamas will welcome any mediation role played by Turkey in such a deal, if Israel accepted such a role, since the movement wants a mediator it trusts and which is not biased toward Israel, but that can rather pressure Israel. However, Israel has yet to show any positive signs in this respect. After its agreement with Israel, Turkey has introduced humanitarian aid to the Gaza Strip and vowed to solve the electricity problem in Gaza, in light of the Israeli blockade. Turkish delegations indeed visited the Gaza Strip in July 2016 to discuss this matter.

Al-Monitor:  News has been recently spreading among Hamas circles about the possibility of striking Hamas’ name off the European Union's list of terrorist organizations. What is new on this subject? What about your latest meetings with European officials?

Hamdan:  Hamas has won a legal battle, as the General Court of the European Union had decided in 2014 to annul EU measures maintaining Hamas on the European list of terrorist organizations, and we are still waiting for the European political decision to implement the court ruling. We believe that this positive decision in favor of Hamas is approaching day by day.

Hamas has held a series of meetings with European political circles, most recently in the first week of November 2016 in Qatar, when the head of the movement’s political bureau, Khaled Meshaal, and a Hamas leadership delegation met a high-level European delegation, including European Foreign Ministry officials. The two sides discussed various topics, and the European delegation expressed a positive position toward Hamas, although the visit was not covered by the media.

Al-Monitor:  Hamas has remained silent on [Donald] Trump’s victory in the US presidential elections. Does this mean that it fears his policies are biased toward Israel, or that it prefers to wait before assessing his political performance in the region?

Hamdan:  Hamas believes Trump’s political behavior will be unveiled after taking office and stepping into the White House. But the movement also believes that the signs he has been giving do not bode well and prefers to comment on his future political positions.