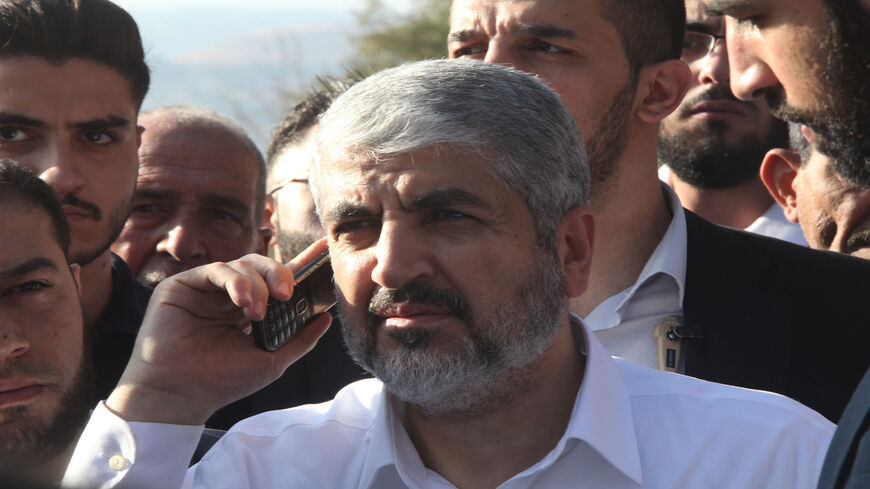 In a July 4 interview with Saudi Arabia’s Al-Arabiya TV, Meshaal affirmed that Hamas did not and will not be a part of a particular axis in the region, because it is a resistance movement that needs the support of all, and that since its inception, Hamas has opened up to all countries. Thanking Iran for supporting Hamas with weapons does not mean that the movement agrees with its regional or international policies, he continued.

Saudi authorities have a majority stake in MBC, the parent company of Al-Arabiya.

Commenting on calls that Hamas sever relations with Iran, Meshaal said that his movement will not break off any relations that serves the interests of the Palestinian people. He further stressed Hamas’ rejection of any aggression against any Arab and Muslim country, in reference to the Houthi attacks on Saudi Arabia.

Meshaal’s appearance on Saudi television after more than a 10-year hiatus came as a surprise. Saudi-Hamas relations had worsened in recent years due to Hamas’ rapprochement with Iran and its bias with the Muslim Brotherhood that came out victorious in the post-Arab Spring elections in the region. Hamas’ moves had angered Riyadh, which in April 2019 arrested dozens of Hamas supporters who are still behind bars in Saudi Arabia.

Al-Monitor learned from both Hamas and Al-Arabiya sources that the TV channel contacted Meshaal to arrange for an interview in late June, and that the latter consulted with Hamas leader Ismail Haniyeh on the matter. Meshaal shared with the channel’s officials his desire to speak freely, without any restraints or restrictions no matter the topic, and that the interview be broadcast live. The TV channel agreed to his first request, and rejected the second for technical reasons, according to the sources.

Basem Naim, a former Palestinian health minister and member of Hamas’ international relations office, told Al-Monitor, “Meshaal’s appearance on Al-Arabiya TV is an important turning point in the movement’s relations with Saudi Arabia, which were marred by tensions and misunderstandings as a result of multiple regional developments that Hamas had nothing to do with.”

The movement, however, seeks to facilitate regional reconciliations, and this interview may present an opportunity to open a new page that would restore the Saudi-Hamas relations, he said.

Meshaal’s interview with Al-Arabiya received wide attention from traditional and social media. This first appearance on Al-Arabiya has provided bold content regarding relations with Iran.

Ahmed al-Hila, a Palestinian political author, told Al-Monitor, “Meshaal’s appearance on Al-Arabiya is a confirmation from Hamas that the damage to its relations with Riyadh is only temporary, in the hope that they go back to the way they were."

The TV channel deleted a segment where he called on Saudi Arabia to release dozens of Palestinians who have been detained in the kingdom since April 2019. The movement did not comment on this deletion, perhaps to avoid tension with Saudi Arabia.

Mustafa al-Sawaf, a political analyst close to Hamas and former editor-in-chief of the local Felesteen newspaper, told Al-Monitor, “Hamas’ position on Al-Arabiya’s policy toward the movement did not prevent Meshaal from appearing on the Saudi channel to shed light on the movement’s regional relations — especially with Iran and Turkey that are not on good terms with Saudi Arabia.” He argued that the appearance helped refute claims of Hamas being subordinate to Tehran and Ankara.

Regardless of the motives behind Al-Arabiya’s request to interview Meshaal, the interview has coincided with growing tension in the Saudi-UAE relations over the war in Yemen and oil-related issues. Meanwhile, the United Arab Emirates does not hide its hostility to Hamas. Granting Meshaal 30 minutes on air, more precisely on Al-Arabiya, is perhaps a message or a challenge from Riyadh to Abu Dhabi.

Although it is still too early to speak of a breakthrough in their relations, the interview broke the ice between the two sides, perhaps in part because the Saudi-Qatari relations have improved, and because Meshaal and other Hamas leaders are based in Qatar.