A widespread security campaign by the Palestinian Authority has been targeting Hamas members in the West Bank, arresting hundreds and refusing to reveal the reasons behind these measures. 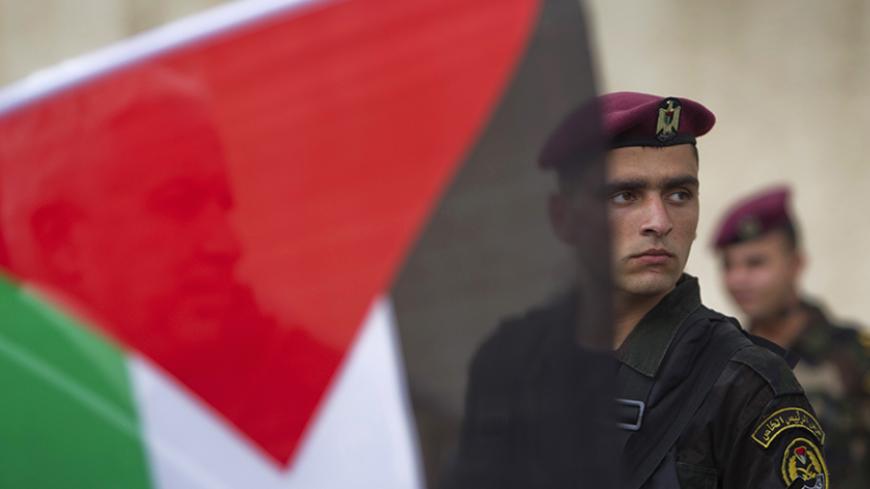 A member of the Palestinian security forces is seen behind a flag in the West Bank city of Ramallah, Sept. 25, 2011. - REUTERS/Darren Whiteside

Palestinians awoke July 3 to the news of a sudden and wide-scale arrest campaign launched by the Palestinian security apparatus against hundreds of Hamas members and cadres in the West Bank. The campaign has been ongoing for around two weeks as of this writing and has been targeting the cities of Tulkarm, Salfit, Hebron, Bethlehem and Nablus.

Hamas published July 14 a list of the names of 250 Hamas members who have been detained in Palestinian prisons since the beginning of the arrest campaign.

Hamas spokesperson Hussam Badran told Al-Monitor, “This is the largest security campaign carried out by the Palestinian Authority [PA] against Hamas since 2007. It is one of the attempts to put an end to the armed resistance’s growing activity against Israel, which announced [to Israel] that Hamas is behind the majority of the armed operations that occurred in the West Bank during the last few weeks.”

The PA’s campaign against Hamas began after the West Bank witnessed a series of armed Palestinian attacks against Israelis in June — on June 29 north of Ramallah, June 27 in the central West Bank, June 21 in Jerusalem and June 19 west of Ramallah.

Al-Monitor spoke with parents of prisoners from the West Bank who refused to reveal their identities and confirmed that the Palestinian security services arresting Hamas members in the West Bank are the Preventive Security Force, the General Intelligence, the National Security Force and the police. These forces invaded the homes of Hamas cadres at late-night hours, all masked and heavily equipped with weapons, accompanied by police dogs, recruits and inspection devices.

Hamas issued statements against the security campaign targeting its members. The latest statement was made July 13 in which the movement warned the PA about the need to take certain measures whose nature it did not reveal to put an end to these arrests because it [Hamas] believes it is under an eradication campaign in the West Bank, which might push it to reconsider reconciliation with Fatah.

It is true that reconciliation between Fatah and Hamas has been taking small and slow steps. However, the recent arrests are an unprecedented setback in the relationship between the two. Perhaps this campaign could be a quick first step to forgetting about reconciliation and going back to the division that Palestinians have been suffering since 2007. Yet, tension between Hamas and Fatah was not only limited to the arrests of Hamas members in the West Bank, but it took a more dangerous dimension following statements issued by both parties.

Akram al-Rajoub, Nablus’ governor, announced on his Facebook account July 4 that the security services will target each and every Hamas member.

As a result, Ismail al-Ashkar, chairman of the Security Committee in Hamas’ Legislative Council, warned the security services in the West Bank in a press statement July 5 that they could become one of Hamas’ targets due to the arrests they are carrying out against it.

A high-ranking Palestinian security official who spoke to Al-Monitor on condition of anonymity refused to reveal the direct reasons for the arrest campaign against Hamas in the West Bank, but he said, “After controlling the Gaza Strip and enjoying a regional and international consensus over its presence there through a long-term truce with Israel, perhaps Hamas is now eager to also control the West Bank. This was revealed by information that the Palestinian security services obtained and were expressed in statements by Hamas' political leaders,” he said.

On the other hand, Ismail Haniyeh, deputy head of Hamas’ political bureau, in a July 14 press statement denied that the security services’ arrests against Hamas would ever push Hamas to turn its weapon that has always been pointed at Israel, in reference to the fact that Hamas does not wish to control the West Bank.

As of this writing, the continuous security tensions in the West Bank point to the PA’s possible reluctance to end its campaign against Hamas, which will raise the number of political detainees in the West Bank, further complicating the situation between Hamas and Fatah.

Al-Monitor learned from top Hamas officials who requested anonymity that Hamas held dialogues with its leaderships in the Gaza Strip, the West Bank and abroad in order to discuss its options following the PA’s assault on the movement in the West Bank. Hamas proposed a series of steps, including public escalation and popular demonstrations, in addition to calling on factions to condemn the measures the PA took against the movement in the West Bank. Certain Hamas members demanded imposing a security restraint on Fatah in Gaza. However, the Hamas leadership denied them this request due to its disinclination toward security escalation with Fatah and its wish to keep its rejection for the political arrests at the popular level, away from taking escalatory security measures on the ground.

Hamas held a press conference July 4 in Gaza, in which the factions participated, to condemn the PA’s campaign against the movement. Hamas-affiliated media outlets quickly gathered Palestinian reactions condemning the PA’s arrests of Hamas members.

Meanwhile, the families of political detainees organized an open-ended sit-in July 8 in Ramallah, until their children are released.

On July 14, the families of detainees launched a campaign under the title “Moush Nasyinak” (Arabic for “We Have Not Forgotten You"), in reference to their children in Palestinian prisons.

Al-Monitor acquired a copy of a secret report prepared by a Palestinian security committee in January 2014 and presented to President Mahmoud Abbas about the security situation in the West Bank.

What may explain the potency of the PA’s crackdown on Hamas in the West Bank is that it coincides with increased armed attacks against Israelis there. It seems that the PA is convinced that these operations — and even if they do target Israeli soldiers and settlers — may harshly affect the PA, for the Israeli army may carry out wide incursions and eliminate its presence there.