The West Bank has seen a spike in arrests of Hamas members, despite the reconciliation deal. 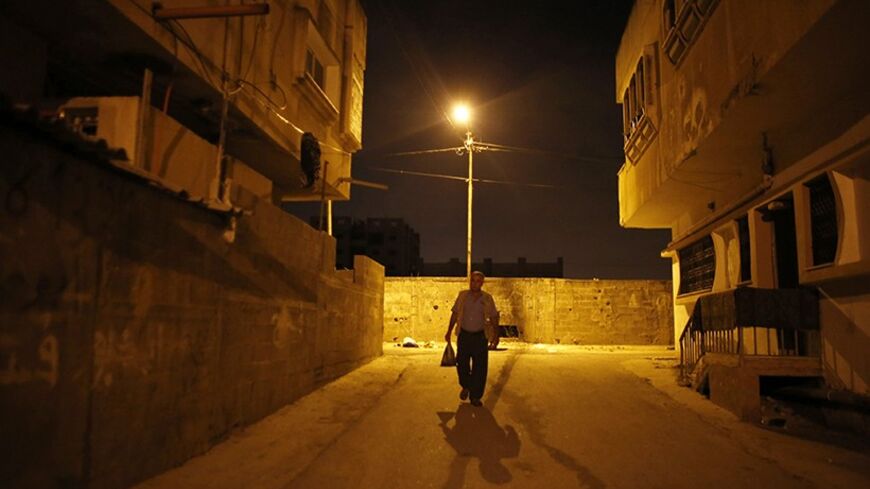 As Azzam al-Ahmad, the Fatah official responsible for the reconciliation file, arrived to Gaza on the evening of May 26, two young men from Hamas in the West Bank, Thaer Shalalada from Halhul and Nour Ahmad from Qalqilya, were summoned by the Preventive Security Forces for questioning on security cases. Hamas members in the West Bank are disappointed because the reconciliation agreement did not stop the arrests of their members. Instead, the arrests increased, according to the Arab Organization for Human Rights.

Statistics that Al-Monitor received from the Hamas committee charged with following up on arrests in the West Bank indicate that the arrests have increased and, since the beginning of 2014, there have been more than 200 arrests and over 500 summons issued. Meanwhile, since the April 23 reconciliation agreement, more than 20 Hamas members have been arrested, with others being summoned, according to the Hamas committee.

On the eve of the reconciliation, arrests reached their peak with the General Intelligence's raid on the houses of members of the legislative council, Ibrahim Abu Salem from Jerusalem and Riyadh Daoud from Tulkarm, who are among Hamas’ main leaders in the West Bank.

Al-Monitor spoke by phone with a Hamas member who was arrested recently and is a student at Birzeit University. Speaking on condition of anonymity after his release from Juneid prison, he said, “The members of the Preventive Security [Forces] led me to their cars and hit me with the butts of their rifles. They accused me of spying on security members. I stayed in jail for a week, during which I was treated inhumanely. I was forbidden from going to the bathroom, deprived of sleep and malnourished.”

Hamas said that the continuation of arrests threatens the reconciliation. Senior Hamas leader Hassam Badran told Al-Monitor from Qatar, “The reconciliation is meaningless if the arrests do not stop. What we are currently witnessing does not indicate a change in the Palestinian Authority's [PA] policy.” He also blamed Fatah for what is happening since it governs the West Bank.

However, West Bank security services stated, “The detainees are arrested as per the law and nobody is held up due to their political affiliations.” They also expressed their concern regarding Hamas' provocative language on the arrests.

Khalil Assaf, a member of the Freedoms’ Committee in the West Bank, visited security leaders on May 8 and “discussed with them the increase in political arrests and handed them lists of detainees for release. He called for a political decision to stop the arrests, which occur almost daily."

“The families of the arrested Hamas members in the West Bank are quite devastated because the reconciliation did not mention them in details, and left the matters to the whim of the security institutions,” an official in the West Bank told Al-Monitor via phone. He expressed his belief that Hamas in Gaza should have given the issue of detainees more importance in the reconciliation, rather than suspending the topic until further notice.

Perhaps this is what pushed Gaza Prime Minister Ismail Haniyeh to say on May 15 that Hamas “will not accept that Gaza enjoys freedoms and the West Bank remains under the effect of arrests of the movement’s members, while Fatah members in Gaza are released.”

It is worth noting that the security services in Gaza are holding 30 Fatah members in their jails. A security official in Gaza told Al-Monitor, “They have been proven guilty of murders and violating the law, and their issue is related to ensuring social reconciliation.”

Al-Monitor interviewed an official in Hamas who participated in the reconciliation deal, and asked him about the possibility of Hamas reneging on the goodwill gestures toward Fatah as a response to the continued arrests of its members in the West Bank.

“Hamas has released members from Fatah because it is faithful to the reconciliation. However, this step has to be reciprocated in the West Bank. Fatah ought to exert efforts to stop arrests and prove its goodwill. Otherwise, Hamas’ efforts to promote the reconciliation among its members will be to no avail with every piece of news about new arrests,” he said.

Samira al-Hulaiqa, a member of the Legislative Council for Hebron, demanded that President Mahmoud Abbas “issue a decision to put an end to the arrests, because the security services claim they are taking orders from him to this effect.”

The past few days have seen a new response by Hamas in the West Bank, with its members refusing to respond to the security services’ summons by remaining in their homes or keeping a low profile. A Hamas field activist from Nablus, who spoke on condition of anonymity, told Al-Monitor, “The reconciliation did not put an end to the arrests, but kept our fate unknown. This pushed us to refuse to respond to the [summons for] arrests, by taking a photo of the summons and publishing it via the Internet or burning it.”

Mohammed Eshtewi from Tulkarm — director of the Hamas-affiliated Al-Aqsa TV — did just this. On May 27, he addressed the General Intelligence on his Facebook page: “I apologize for not appearing in the intelligence headquarters upon your telephone call. After today, I will not accept to be hurt by anyone.”

The past few weeks have witnessed rallies in the cities of the West Bank, as the families of Hamas detainees protest in front of the PA’s prisons, calling for their relatives' release.

The Muslim Youth Association in the West Bank, a largely unknown group, declared that it “refuses the security services summons, calling upon [young people] to remain at home at whatever cost, even if things will lead to security force members raiding and breaking into their houses.”

The Palestine Dialogue Forum, a popular website among Hamas members, published an unprecedented article titled “Hamas sold us out in the deal with Fatah,” calling upon the movement’s cadres to escalate their stance on the ground in the West Bank to solve the problem.

Al-Monitor spoke with a senior security official in the West Bank, who requested anonymity, and asked him about Abbas’ role in the arrests. “The president is serious about the reconciliation, but he cannot order the security apparatuses to stop the arrests at the push of a button, knowing that Hamas is preparing operations against Israel. This is why he allows security services to do their job at a narrow margin without sabotaging the reconciliation,” he said.

On the other hand, Jamal Abu Rabb, a leader in Fatah, said, “Arrests in the West Bank happen for two reasons: either weapons possession or money laundering. There are no political arrests or any transgressions that will be dealt with by means of force.”

Nazih Abou Aoun, a Hamas leader in the West Bank, does not predict “a close end to the phenomenon of arrests, because the next government will not be able to stop them, as it does not have political powers to do so and the security issue in the reconciliation has yet to be settled.”