Hamas is accusing the Palestinian security services in the West Bank of continued political arrests against its members despite the reconciliation agreement with Fatah. 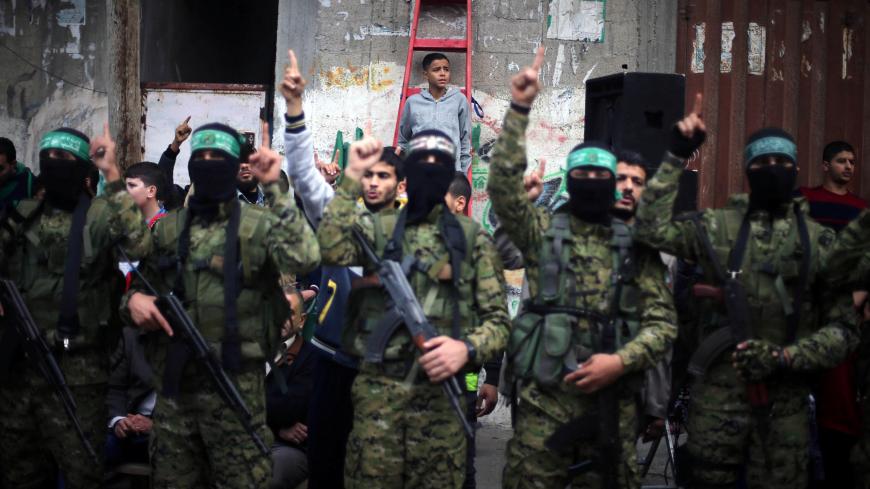 On Nov. 18, Hamas had accused the Palestinian Preventive Security (PPS) in the West Bank of ongoing politically motivated arrests of its members. A committee of families of political prisoners in the West Bank documents on Facebook all of the Hamas members and political activists from other parties arrested or summoned for investigations by the PA on a daily basis.

On Oct. 25, following the Oct. 24 rearrest of six Hamas ex-prisoners, the committee denounced the continuing arrests and warned that they may hinder the reconciliation.

The committee posted on its Facebook page that on Dec. 4 the PPS arrested Ahmed Shaltaf in Nablus. Shaltaf, a student at the Kadoorie Technical University in the city of Tulkarm, was arrested after being summoned for investigation. It also reported that Palestinian intelligence in Hebron kidnapped two liberated prisoners Mustafa Bastanjani and Samih Bastanji.

Hamas activist Bahjat Yamin, from Qalqilya in the northern West Bank, was released from an Israeli prison in 2008. On Nov. 5, he was surprised by the PPS, who raided his workplace in Qalqilya and then placed him under arrest. He remains under arrest at the PPS headquarters in the city.

His wife, Lubna Yamin, told Al-Monitor that her husband’s arrest came as a surprise as no prior summons or notices were received, questioning the seriousness of the reconciliation in light of the continued arrests.

Lubna, a school teacher who visited her husband at the PPS headquarters on Nov. 28, said, “No charges have been made against my husband. He is a political detainee. From the first day of his arrest, they have been telling us he will be released soon, but have yet to free him. I saw him in one of the PPS offices and an interrogation officer stayed with us throughout the visit.”

“The reconciliation seems to be a bad omen for us,” she said. “After the signature of the Cairo agreement in 2011, I was dismissed from my job by the Ministry of Education and Higher Education for political reasons. I filed a complaint with the High Court of Justice, and in October 2012 a decision was issued to bring back all employees dismissed for political reasons. This time, after the reconciliation agreement in Cairo on Oct. 12, my husband was arrested.”

Yamin is considered 73% disabled due to neck issues and back and shoulder pain. “The torture and violent interrogations in Israeli jails during his detention from 2004 to 2008 left him with nerve damage,” she said.

Yousef added, “The continued arrests are an obstacle to reconciliation. No one can accept reconciliation amid severe ongoing security clampdown.”

On the number of detainees in the PA jails, he said, “Cases of prosecutions cannot be counted. The PA arrests and releases Hamas members and political activists on a daily basis. The PA security services are constantly issuing summonses and carrying out investigations. Some people are detained for a few days and then released. These prosecutions and this security policy have never stopped.”

Yousef explained, “Hamas stressed the need to resolve the issue of these arrests in the Cairo reconciliation talks. It was agreed to resume the work of the Public Freedoms Committee in the West Bank. This committee, however, told us that it is waiting for a meeting with the heads of security services in the West Bank to put things back on track.”

Indeed, it was agreed at the Cairo talks on Nov. 22 to reactivate the Public Freedoms Committee ensuing from the 2011 Cairo Agreement. On Nov. 26, the committee held its first meeting in the city of Ramallah and called for a halt to political arrests.

Committee member Khalil Assaf told Al-Monitor, “Political arrests did not stop despite the reconciliation, and they were discussed during the committee meeting.”

He said, “The Freedoms Committee is awaiting a meeting with Prime Minister Rami Hamdallah, in his capacity as minister of interior, and the directors of the security services to agree on its operational mechanisms."

Assaf told Al-Monitor, “Orders must be issued by the directors of the security services to stop arrests without a warrant. The PA has drafted a number of laws to help it execute its political arrests. For example, the recently enacted cybercrimes law facilitates political detentions, as some of its vague provisions are interpreted to accuse, prosecute and arrest political activists. Members and activists are arrested under the pretext of provoking sectarian or civil strife.”

The Freedoms Committee operates under a legal document signed on Feb. 5, 2013, consisting of 11 articles setting forth general principles clarifying the freedoms of citizens, factions and political action that must be safeguarded and protected. The Egyptian sponsor of the talks and the Palestinian factions were informed of this document and approved it.

On Oct. 14, Assaf told Wattan News Agency, “Whoever violates the Freedoms document shall be held responsible for sabotaging the reconciliation.”

Throughout the decadelong division, which saw various reconciliation agreements, political arrests have never stopped. These arrests are likely to continue despite the ongoing reconciliation meetings and understandings that have yet to reach a full-fledged reconciliation.