Hamas says a crackdown by the Palestinian Authority has damaged Hamas' formal structure in the West Bank, but that it is reorganizing nevertheless. 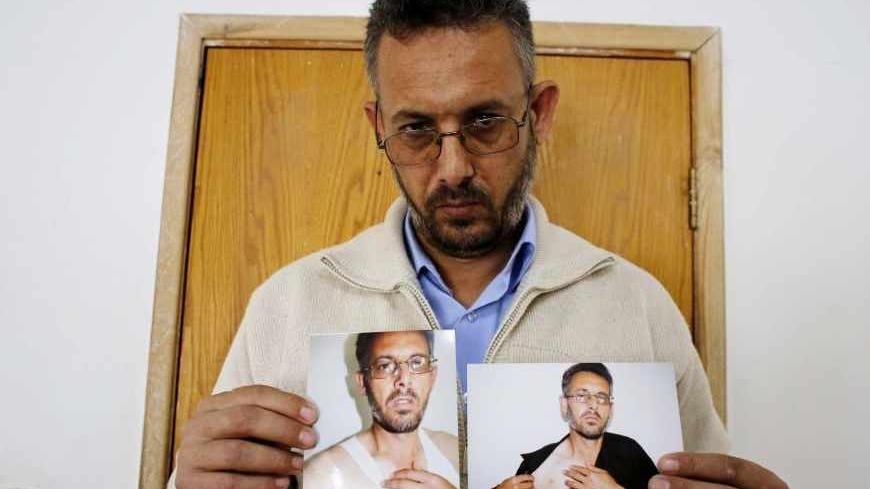 Mohammed Ghannam shows photographs depicting what he says are injuries he suffered when he was detained by Palestinian security forces, at his home in the West Bank village of Dura, near Hebron, May 12, 2013. Ghannam, 44, said plainclothes security forces from the Palestinian Authority detained him in April for belonging to Hamas and beat him mute. - REUTERS/Ammar Awad

When Hamas resorted to what it called “military decisiveness” in June 2007 by expelling the Palestinian Authority (PA) from Gaza and establishing control over the entire Gaza Strip, it was clear that the PA would retaliate by launching a rigorous anti-Hamas arrest campaign in the West Bank. Hamas accused the PA and Israel earlier this month of escalating matters by arresting and torturing its leaders and supporters in the West Bank.

A senior Hamas leader in Gaza told Al-Monitor that what the PA is doing against the movement in the West Bank is a desperate attempt to eradicate Hamas completely and is the embodiment of security coordination between the PA and Israel, claiming that the number of Hamas detainees is in the hundreds. They are held in a number of West Bank prisons that are affiliated with the PA’s General Intelligence and Preventive Security agencies.

Al-Monitor obtained an internal Hamas document that shows that the PA still holds more than 72 Hamas members in its jails. Since the start of 2013, 440 Hamas activists and supporters have been arrested for political reasons and 920 were summoned by the security services, among them freed prisoners, university students, journalists, imams and teachers, most notably Wajdi al-Aruri, Islam Hamed, Atef al-Salihi, Ayoub al-Qawasmi, Abdelfattah Shreim, Alaa Dhiab and Amin al-Quqa.

Hamas has been issuing periodic reports that show how much damage the PA’s anti-Hamas campaign in the West Bank has caused. The campaign included many violations, such as detentions, storming of charities and shutting them down, sabotaging university rallies by interfering with students, converting some universities to security and military sites, breaking into homes, destroying private and public property, kidnappings and shooting at individuals.

The PA’s measures and practices have harmed Hamas’ organizational structure. Palestinian security forces are pursuing all political activities and rallies for fear that Hamas might gain control of the West Bank, as it did in Gaza. That is happening in light of warnings by Israeli intelligence about potential Hamas actions in the West Bank.

Still, a Hamas official in the West Bank told Al-Monitor that the PA’s measures — despite their severity — have not significantly affected the movement, which has adopted what he described as a “fluid organizational structure.” It has no clear hierarchy, which means the organization operates by means of individual efforts in case the leadership structure becomes absent. Hamas is firmly entrenched in the West Bank because it has many prominent supporters who are not official members.

The Hamas official added that what is allowing Hamas in the West Bank to recover from the blows inflicted by the PA and Israel is the emergence of a group of young people who lead the movement’s activities without going back to the organization’s leadership. Although he admitted that the blows have effectively dismantled the movement’s formal structure, he said that the blows have not prevented attempts to reorganize in a way where the Hamas leadership has moved to what is termed the fourth and fifth levels.

A look at Hamas’ behavior in Gaza shows that it is passing through a serious crisis. After Egyptian President Mohammed Morsi was ousted, Hamas lost its largest ally in Egypt. That has prompted activists hostile to Hamas to launch a tamarod movement of their own, which calls for the overthrow of Hamas’ rule in the Gaza Strip.

Hamas spokesman Sami Abu Zuhri denied to Palestinian media on Aug. 4 that tamarod has a wide popular base. He considered the movement a partisan organization led by Fatah and part of the latter’s political struggle with Hamas. He described tamarod as a Fatah ploy to feign popular support and a desperate attempt that will fail to achieve its objective.

But the strongest reaction to tamarod’s calls came from Abdul Salam Siam, the secretary-general of the Council of Ministers in Gaza. On Tuesday, he called for rebelling against the Israeli occupation and “those who cooperate with it,” alluding to the PA in the West Bank.

That may have prompted Hamas to consider attacking Israel, whose intelligence services have discovered Hamas military cells in Ramallah and Hebron. Those cells, which have conducted some shootings, are said to be building rockets and bombs, and planning to kidnap Israeli soldiers.

Indeed, a source familiar with Hamas told Al-Monitor that armed resistance is Hamas’ strongest card and that direct anti-Israel military action in the West Bank is easier than in besieged Gaza. In the West Bank, Hamas can also provide such operations with human, logistical and media support.

This month, media reports surfaced of a Syrian-Iranian effort to transfer weapons to the West Bank via Jordan and build up military capabilities in the West Bank that would threaten Israel. That happened in conjunction with the restoration of Hamas-Iran relations.

On Aug. 6, Jordanian authorities uncovered in the city ​​of Madaba, near the capital, Amman, two separate weapons-smuggling operations. The operations were being conducted by five Syrians. The weapons being smuggled included anti-tank rockets, surface-to-air missiles and rifles. Their final destination was reported to be Hebron in the southern West Bank. Hebron is considered Hamas’ top stronghold in the area.

Although the source that spoke with Al-Monitor refused to confirm or deny this information, if the information is true, it would help Hamas undermine the influence of the PA, which is currently negotiating a settlement with Israel.

Finally, the tightening of the PA’s procedures on the one hand and increased Israeli surveillance on the other have not prevented Hamas from using its “local networks” to carry out operations in West Bank streets and alleyways. We may yet witness an increase in the number of attacks on Israeli patrols by Molotov cocktails and hand grenades as well as more shootings and rock throwing on Israeli posts.