Hamas fears Israel may take advantage of its newfound isolation. 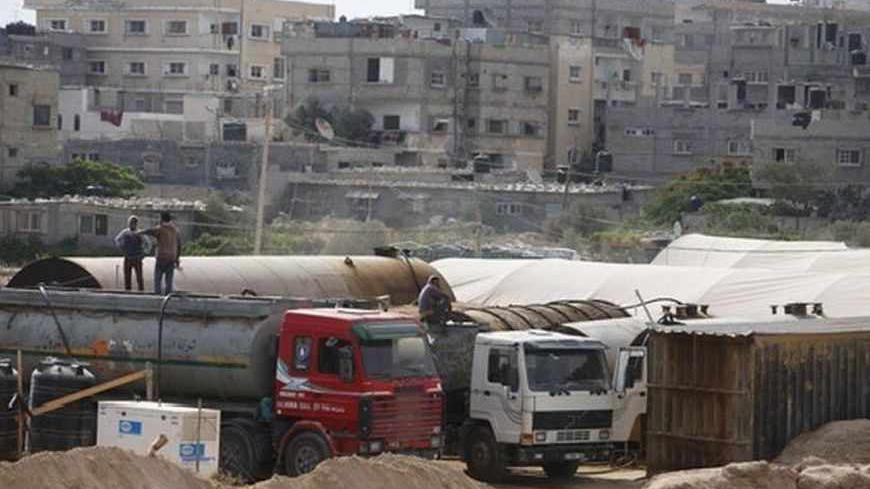 Palestinians wait as they fill tankers with fuel on the border between Egypt and the southern Gaza Strip, July 8, 2013. - REUTERS/Ibraheem Abu Mustafa

Hamas enjoyed a short honeymoon with now-ousted Egyptian President Mohammed Morsi. But since the army generals removed him from power and put someone else in his place, Hamas has been in mourning. Morsi’s ouster was a serious political and ideological blow for the organization.

The Muslim Brotherhood’s downfall also frees Israel’s hands in isolating Hamas and potentially dealing it a painful military blow, something which Israel did not complete in the recent November 2012 war. In that conflict, Israel feared severely damaging its relations with the Brotherhood leadership in Egypt if it continued its military operation against Gaza.

During the latest war, Avigdor Liberman — leader of Yisrael Beiteinu, chairman of the Foreign Affairs and Security Committee in the Israeli Knesset and a major partner in the coalition government — called on Israel to reoccupy the Gaza Strip without delay.

Hamas did not comment on Liberman’s threat when he made it. Hamas linked the threat to Israeli military leaks about Hamas smuggling large quantities of advanced weapons through the tunnels, including Grad rockets, anti-tank missiles, cannons and large quantities of ammunition.

A Palestinian military official in Gaza who spoke with Al-Monitor was suspicious and wary of Israel’s new strategy to protect its soldiers and military vehicles near the Gaza border. Israel drastically reduced the number of soldiers deployed there and replaced them with advanced electronic devices. Israel also set up sand mounds and laid land mines near military sites, according to the official. The source considered those moves as a prelude to a military confrontation that will coincide with developments in Egypt.

Israel recently announced that it developed surveillance equipment to monitor the Gaza Strip — including radar, remotely controlled weapons systems and balloons flying at up to 300 meters (984 feet) — to support infantry troops in monitoring every inch on the Gaza border and gather large amounts of field intelligence.

In the eight months since the war ended, Hamas has shown restraint in adhering to the truce agreement with Israel. Unlike in previous truces, Hamas has not launched shells or rockets. Today, Hamas is avoiding a confrontation with Israel, as Al-Monitor has previously reported.

After the developments in Egypt and Morsi’s ouster, Hamas feels like an orphan, and it is trying to deprive Israel of pretexts to strike. Hamas is aware that Israel is no longer concerned about harming its relations with Cairo, after Morsi was replaced with a leadership that is not friendly with Hamas.

Some Gaza military circles are concerned about the continued tunnel closures by the Egyptian military after the coup, since closing the Egypt-Gaza tunnels harm Hamas’ military strength in Gaza.

According to both Egypt and Israel, money, weapons and fighters enter Gaza through the tunnels between Gaza and the Sinai. Therefore, closing or demolishing the tunnels weakens Gaza’s militants by hampering their resupply.

Furthermore, Hamas is concerned that Israel may be able to single out Hamas for attack. There has been no contact between Egyptian officials and the Palestinian factions in Gaza since June 30 and the subsequent political changes in Egypt with Cairo preoccupied with its internal problems.

Some Hamas members told Al-Monitor they feared a prolonged estrangement between Gaza and Egypt, not only because Egypt is preoccupied with internal matters, but also as an expression of Egyptian anger about media reports accusing Palestinians of participating in internal Egyptian events, particularly in the Sinai. Hamas’ leader in Gaza, Ismail Haniyeh, has denied any involvement.

Hamas also fears that Israel would misinterpret the cessation of Egyptian-Hamas contacts as Egypt lifting its cover on the Gaza Strip, thus exposing the Strip to a major military campaign. Morsi was an obstacle for any Israeli military move against Gaza.

For its part, Hamas is not staying passive about developments in Cairo and Tel Aviv, although Hamas is committed to maintaining media silence on what is happening in Egypt.

In the field, the Qassam Brigades have deployed dozens of fighters on the border with Egypt near Rafah to prevent the firing of rockets toward the nearby Israeli crossing of Karam Abu Salem, as well as to prevent any armed infiltration from Egypt into Gaza and vice versa.

A high-level Hamas political source told Al-Monitor that the movement held marathon sessions with the various armed groups in Gaza to prevent disturbing the tranquility in the sector and deny Israel a pretext to launch a major military assault at a time when the whole world is preoccupied with the developments in Egypt.

Hamas bitterly remembers the declaration that former Israeli Foreign Minister Tzipi Livni made from Cairo in late December 2008 about the war on Gaza, as she stood next to her Egyptian counterpart, Ahmed Aboul Gheit. Hamas fears a repeat of that scene with the new Egyptian regime.

Nevertheless, Hamas is confident about its growing military strength since the last Gaza war. On July 7, a Hamas military spokesman publicly declared that Hamas is ready to respond to any Israeli surprise attack, and that Hamas’ Qassam Brigades have prepared “surprises” for the Israeli army if the latter attacks Gaza.

Hamas also feels that the new Egyptian regime, which probably doesn’t enjoy majority support, wishes to avoid a new Israeli war that would complicate matters internally and externally. Nevertheless, Hamas is concerned about not having Egyptian guarantees that Israel will not go to war.