Egypt's decision to establish a buffer zone on the Gaza border has raised Palestinian fears of a possible armed confrontation. 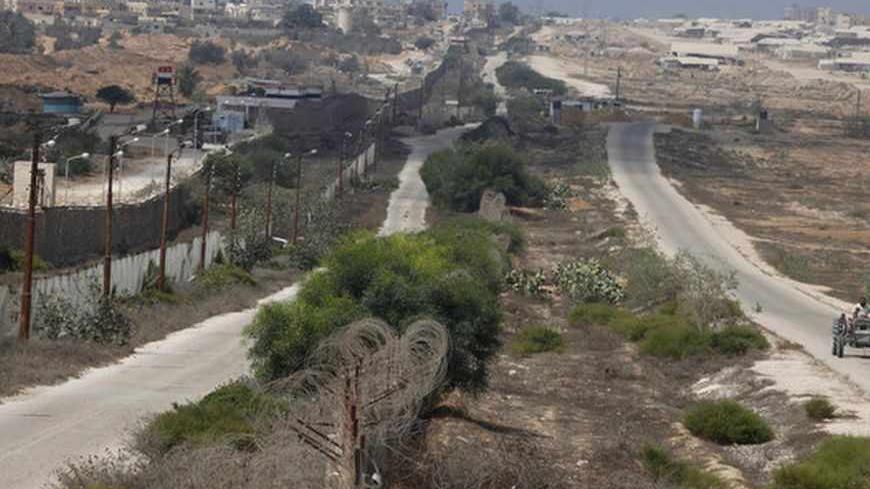 A Palestinian man drives on the border between Egypt and the southern Gaza Strip Sept. 3, 2013. - REUTERS/Ibraheem Abu Mustafa

The Palestinians are wary about the Egyptian army’s movements on Gaza’s southern border. There have been reports that Egyptian military vehicles are doing more than just demolishing the tunnels and closing the smuggling routes, as a number of Egyptian officials have stated. The Palestinians, Hamas in particular, have become very concerned about reports that Egypt may set up a buffer zone along the Gaza-Egypt border.

Information on that subject is scarce, but Al-Monitor learned during a meeting with a security official in Gaza that the Egyptian army will establish a 500-meter buffer zone along the Gaza border to prevent smuggling and to control the tunnels.

Al-Monitor toured the Egyptian-Gaza border and saw the army clearing everything 250-300 meters from the border. One could easily see Egypt’s military movements and hear it blowing up houses suspected of hiding tunnels.

Al-Monitor conducted telephone conversations with some of the border area’s residents, who confirmed that the Egyptian army told them to evacuate their homes. In the al-Sarsouriyyah neighborhood, 13 houses were destroyed after tunnel entrances were discovered inside them. Military bulldozers have also cleared the densely wooded areas near the Rafah border.

Although the buffer zone will be on Egypt’s side of the border, a prominent worker in the Gaza tunnel industry told Al-Monitor that it will be a nightmare for the smuggling industry, for both arms and consumer goods, because with the buffer zone, the Egyptian-Palestinian border will resemble the Egyptian-Israeli border near Eilat and the Israeli-Palestinian border in east Gaza.

He added that the buffer zone will be an empty area easily accessible to the Egyptian army, which can monitor it by means of satellites, other sophisticated equipment or by Israeli-styled observation posts, thus eliminating Gaza's supply of its basic needs.

Al-Monitor has learned from informed sources in the Sinai that in the past two days, some Egyptians in the border area have held rallies near the Salamah roundabout in al-Sarsouriyya and near the field of the Unknown Soldier near the border. The protesters burned tires to express their opposition to Egypt’s decision.

Some journalists have reported that the Egyptian army has sent reinforcements including bulldozers and armored vehicles to the vicinity of the demonstrations, while military helicopters overflew east of the Rafah crossing.

Egyptian military expert Maj. Gen. Talat Muslim said he expected armed operations by some Sinai residents who use the tunnels in their trade after the army destroyed their homes.

Hamas sources say that the group has had no contact whatsoever with Egypt. Hamas learned about the buffer zone decision from news agencies, and was in shock as it tried to draft an initial reaction.

Hamas’ reaction was limited to a statement by the Hamas government spokesman in Gaza Ihab Ghussein. He said that buffer zones should not be set up between "brother" states, because Gaza is Egypt’s first line of defense. He expressed hope that Egypt’s decision would not end up solidifying the blockade on Gaza and exacerbating its people’s suffering.

Mushir al-Masri, a Hamas member in the Legislative Council, said that the buffer zone complements the iron wall raised by then-president Hosni Mubarak, and is an extension of the separation barrier in the West Bank set up by former Israeli Prime Minister Ariel Sharon.

Youssef Razqa, political adviser to Hamas' Prime Minister in Gaza Ismail Haniyeh, said there was no need for a buffer zone because there is no state of hostility between Gaza and Egypt, nor any security and military reasons, and added that Israel is the only party that is happy with this decision.

Since Hamas reacted with “soft diplomacy,” an informed Hamas source told Al-Monitor that the buffer zone opens a new page of tension with the Egyptian authorities, because the zone causes economic damage to Gaza and chokes Gaza’s armed forces of military supplies, which pass through the tunnels.

He found it ironic that during the reign of Egypt's deposed President Mohammed Morsi, he and Hamas discussed setting up a free-trade zone on the common border to improve trade between Gaza and Egypt and to put an end to the tunnel trade, which reportedly earns Egypt about $1 billion a year.

Al-Monitor has learned that the parade garnered mixed reactions within Hamas, because it sent provocative messages to Egypt, which may escalate its aggression toward Hamas by accusing it of being involved in the armed incidents in the Sinai, something the movement has always denied.

Meanwhile, the Salafist jihadist group and Jaysh al-Islam in Gaza have set up a large “preaching tent” in Rafah despite the tense ties with the ruling Hamas.

The Islamic Resistance Brigades, a new military formation with Salafist tendencies that first appeared in November 2012, said it would hit Tel Aviv if the Egyptian army storms Gaza and that it would fire on Israel if one artillery shell is fired on Gaza from the Egyptian side.

Despite this, the attitude in Hamas, according to what Al-Monitor has learned, is not to escalate the situation with Egypt, either politically or militarily. Some in Hamas want to de-escalate and avoid any action that may aggravate the situation for Gaza.

Finally, after Egypt’s buffer-zone decision, Gazans are speculating about whether war will break out between the two sides, so much so that the Hamas government’s Al-Ra’i official news agency published a report titled: “Will the Egyptian army attack the Gaza Strip?”