Is Hamas working with Wilayat Sinai?

While Hamas officials deny ties to IS in Sinai, Gaza residents claim that Sinai terrorists were admitted for treatment in Gaza, and Israel argues that Hamas provides weapons to these terror groups. 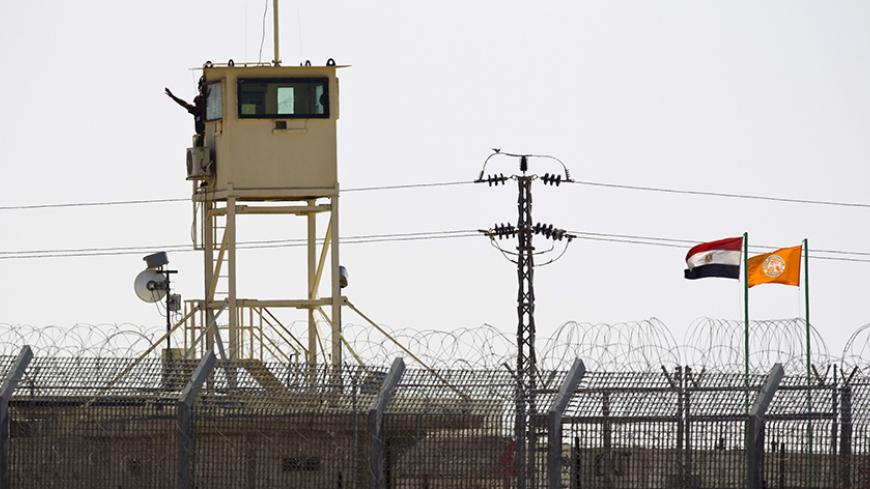 A member of Egypt's security forces gestures as he stands on a watchtower in North Sinai, as seen from across the border in southern Israel, July 2, 2015. - REUTERS/Amir Cohen

The question of whether Hamas’ military wing cooperated with Wilayat Sinai (literally Sinai Province), the organization that carried out the big terrorist attack in the Sinai Peninsula on July 1, is critical for Hamas. This issue is expected to impact not only the future of its relationship with Egypt, but the future of the movement overall. The largest terrorist attack in Sinai occurred when the leaders of the political wing thought the complicated relationship with the regime of Egyptian President Abdel Fattah al-Sisi was stabilizing and that improved relations and a calming of the tensions between them was on the horizon. Once again, however, an accusing finger is pointed toward Hamas, and its leaders are forced to defend themselves.

The leaders of the movement, Ismail Haniyeh, Mousa Abu Marzouk and Abu Obeida, the spokesman of the military wing, quickly denied any connection with the Sinai terror organization affiliated with the Islamic State (IS). In an interview with Al-Quds network, Abu Marzouk explained that everyone knows how his movement works in Gaza against what he called “the black extremism.” He was referring to the surge of arrests in recent weeks carried out by Hamas of members of Salafist organizations in Gaza after Salafists had fired rockets toward Israel and tried to entangle his movement. Israel repeatedly states that it holds Hamas responsible for rockets fired at it.

Abu Marzouk, considered to have good relations with the Sisi regime, was sent on a defensive propaganda mission, while Khaled Meshaal, the leader of the movement, who is treated as persona non grata by Egypt, kept his silence. Any word from him would probably cause further damage to the complex relations.

Abu Marzouk, who has filled the leadership void in the movement ever since the crisis with Egypt, did his utmost to diminish the tension between the sides. He claimed that not only did Hamas have no interest in cooperating with the terrorists in Sinai, but the movement itself was harmed by the terror attack on its border. Abu Marzouk argued that every time the Egyptians intend to open the Rafah crossing a horrible attack happens and disrupts things. “This is detrimental to the security of Palestinians, especially those living in Gaza,” he added, saying that the attacks hurt Hamas’ relations with Egypt.

On the other hand, the coordinator of government activities in the territories, Maj. Gen. Yoav (Poli) Mordechai, was interviewed on Al Jazeera in Arabic and asserted that Israel has intelligence information that Hamas supports the Wilayat Sinai group, which carried out the attack, and even helped it with weapons. Mordechai added that Wael Faraj, a commander of a unit of Hamas’ military wing, Izz ad-Din al-Qassam Brigades, smuggled injured fighters of the jihadi group to hospitals in Gaza and that the members of the military wing have close ties with the organization, which is affiliated with IS.

The Egyptian response to Hamas’ alleged involvement was restrained. Sisi, who arrived for a tour of Sinai, did not rush to accuse members of al-Qassam Brigades of cooperation with the perpetrators of the attack, but the leaders of the movement also know that the crisis hasn’t passed. The Egyptians haven’t yet cleared the movement of responsibility, and Hamas believes Israel will try to convince Egypt that it has evidence of such cooperation. Hamas believes Israel wants to drive a wedge between Hamas and Cairo to destroy the bridge they have started to build into the heart of the Egyptian regime in the last few months.

In any case, the leaders of Hamas will find it hard to dispel all blame from themselves. In recent weeks, a number of people who were hurt in altercations with Egyptian security forces in Sinai have been brought to the al-Najjar hospital in Rafah in the Gaza Strip. The information about al-Qassam Brigades bringing these wounded persons to the hospital wasn’t kept secret. Residents of Rafah saw how wounded people were brought in Hamas “military” vehicles and treated by a select medical staff. One resident of Rafah I spoke with explained that the treatment of injured in Gaza does not testify to support for one side or another in the war in Sinai, but is done as a humanitarian act, comparing it to Israel treating Syrian wounded in the Golan Heights.

A senior security figure in the Palestinian Authority, who is following events in Gaza, told Al-Monitor on condition of anonymity that the cooperation of members of al-Qassam Brigades with many armed groups in the Sinai Peninsula is well-known to the leadership of the Palestinian Authority, Israeli intelligence, as well as Egyptian intelligence. He says the information shared by everyone isn’t a working assumption, but well-founded and well-known, and that it includes the names of people active on both sides. The activity of Faraj, which Mordechai revealed on Al Jazeera, is known and has taken place for a long time, the Palestinian source told Al-Monitor. According to the source, for years the leaders of the military wing carried out extensive smuggling operations with anyone who could help Hamas in Sinai before Israel’s disengagement from Gaza (2005), but especially after the tightening of the siege on the Gaza Strip. The close relations reached a peak after the fall of the Muslim Brotherhood regime in Egypt in July 2013, with the ascension of Sisi, a general who then headed the Egyptian military. After the Egyptian military sealed the smuggling tunnels with Egypt in Rafah and created a buffer zone, a strategic change occurred in the way in which Hamas’ military wing perceived the Egyptian security forces. The Egyptian military is now perceived by the armed groups in Sinai and the Gaza Strip, including Hamas, as an enemy, and their goal has become to strike it and weaken its power in Sinai.

For years, a complicated and mutually beneficial relationship was built between Hamas members and jihadi activists on the Sinai Peninsula. Al-Qassam Brigades received aid from IS affiliates such as Wilayat Sinai, Aknaf Bayt al-Maqdis battalion and other terror organizations in smuggling arms, ammunition and raw materials such as fuel and building materials into Gaza. In exchange, Hamas provided a significant percentage of the arms smuggled from Sudan and Libya. Thus a reciprocal relationship was created that no one among the political leadership of Hamas will be able to uproot.

This utilitarian relationship structure is known and familiar to the heads of the political leadership of Hamas. Ever since Israel placed a siege on Gaza in June 2007, they encouraged the heads of al-Qassam Brigades to conduct the Saladin project — the creation of the smuggling tunnel network between Egypt and Israel. Any means were acceptable for that purpose, including the deliberate connection to “black extremism.” Now comes Hamas’ time to pay up, and as always, those who will have to pay the price are the residents of the Gaza Strip.