Growing cooperation between Hamas and the Egyptian government is making life more difficult for Islamic State affiliate Wilayat Sinai by draining its sources of support. 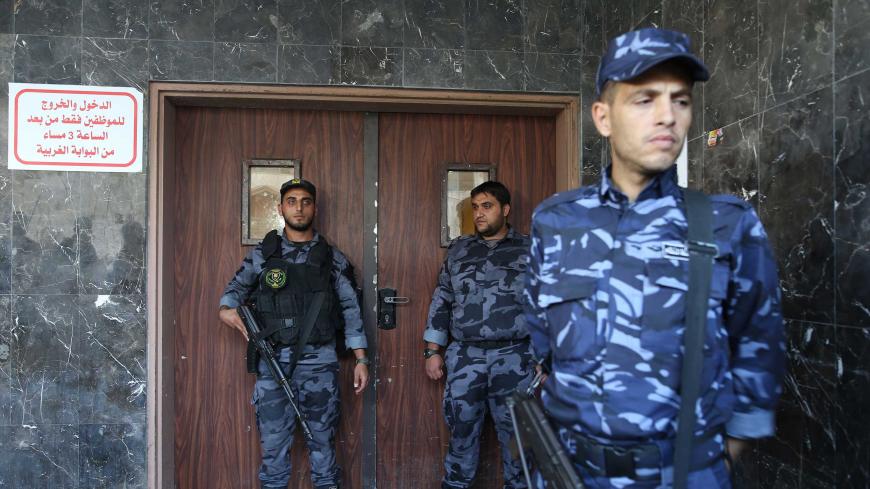 Terrorist group Wilayat Sinai, an Islamic State affiliate, has been infuriated by the rapprochement between Hamas and Egyptian intelligence in the wake of the Palestinian reconciliation reached Oct. 12.

The Hamas-Egypt rapprochement means the common borders will be secured and Wilayat Sinai jihadis will be prevented from moving between Gaza and Sinai. This denies Wilayat Sinai access to the areas where it used to train some of its Gazan members. Also, with the new security measures, the group will no longer be able to smuggle in money and logistical support.

A Sinai tribesman close to Egyptian intelligence told Al-Monitor on condition of anonymity that Wilayat Sinai’s most recent effort to jeopardize the reconciliation was a failed attempt Oct. 27 to assassinate Gen. Tawfiq Abu Naim, the commander of the Gaza Strip security services and one of the most influential Hamas leaders.

He said a jihadi loyal to Wilayat Sinai in Gaza planted an explosive device in Abu Naim’s car, based on what Egyptian intelligence found out from Palestinian security investigations in Gaza.

The tribesman said the assassination attempt was the result of Abu Naim's intensive efforts to keep Wilayat Sinai from infiltrating Gaza from Sinai by closing jihadi training sites in Gaza and arresting suspects in connection with Wilayat Sinai.

“Wilayat Sinai is trying to undermine the Palestinian reconciliation by carrying out terrorist operations and planting numerous explosive devices on the Egyptian international road that reaches the Rafah crossing on the Gazan border," the tribesman said. "The terrorist group is seeking to impede the opening of the crossing for humanitarian cases and travelers from Gaza to Egypt and the world by creating security obstacles to prevent safe travel.”

Despite the Palestinian reconciliation, which stated that the Rafah crossing should be opened Nov. 15, it remains closed.

“The Rafah crossing is one of the most important Egyptian guarantees to achieve reconciliation, because it represents a lifeline for the people of Gaza and ends all smuggling operations through the tunnels, which pose a critical obstacle for Egyptian-Hamas security. As for Gazans, they won't benefit from reconciliation if the Rafah crossing remains closed. … Tension will prevail in Gaza between Hamas, the Palestinian Authority and Egypt,” the source added.

Also, eyewitnesses in Sheikh Zuweid confirmed to Al-Monitor that Wilayat Sinai members have established mobile checkpoints in the desert and at bypass roads to intercept smugglers of goods to the tunnels. They also said Wilayat Sinai burned a number of cargo cars recently and distributed statements threatening any person trying to smuggle goods into Gaza to help what they called “the continued control by the infidel government of Hamas.”

Although the Egyptian government sees the border tunnels with Gaza as the terrorists' main means of supply and movement and blames them for the worsening security situation in Sinai, Wilayat Sinai seems to be waging its own war on Gaza’s tunnels.

Explaining this apparent paradox, a researcher specializing in Sinai affairs and armed groups told Al-Monitor on condition of anonymity that Hamas turned a blind eye to Wilayat Sinai when the group used the tunnels to receive logistical and financial support and to transport wounded militants to Gaza to get treatment. But things started changing in 2016 as the rapprochement began between Hamas and the Egyptian security services. Hamas, in exchange for securing the tunnels and fighting extremist ideologies, hoped to get the Egyptian government to lift its siege and open the crossings with the Gaza Strip.

“This ignited the war declared by Wilayat Sinai against Hamas. This also prompted Wilayat Sinai to issue statements accusing Hamas of disloyalty," the researcher told Al-Monitor.

On Aug. 17, two jihadis from Gaza tried to infiltrate through the tunnels to join Wilayat Sinai, but a Hamas force intercepted them. One of them detonated an explosive belt he was wearing. The jihadi and a Hamas soldier were killed and other Hamas soldiers were injured.

The researcher further said that Wilayat Sinai is trying to use pressure to thwart the Palestinian reconciliation and embarrass Hamas in front of the Egyptian and Palestinian public. One of the most effective ways to influence Egyptian public opinion, he said, is revealing the names and photos of fighters in Wilayat Sinai who just months ago were among the elite forces in the ranks of Izz ad-Din al-Qassam Brigades, the military wing of Hamas.

To influence Palestinian public opinion, Wilayat Sinai is calling attention to the Hamas government’s inability to open the Rafah crossing to the Palestinians and to meet their basic needs. At the same time, the researcher said, Wilayat Sinai is also calling into question Hamas’ mission and religious background by using fierce and aggressive rhetoric against the al-Qassam Brigades on social media networks, websites and electronic forums. The researcher said this rhetoric could influence some members of Hamas, especially as it focuses on mobilization against Israel.

Some of Wilayat Sinai's social media statements point out Hamas' "offenses" against the Palestinian cause: preventing the jihadis from firing rockets from Gaza toward Israel, applying infidel laws rather than Islamic Sharia and concluding agreements with the Egyptian army, which protects Israel's security and fights the jihadis.