Islamic State affiliates in Egypt’s Sinai province, known as Wilayat Sinai and formerly as Ansar Bayt al-Maqdis, devised a plan to rattle the Egyptian army, but it seems that their attempts were unsuccessful. 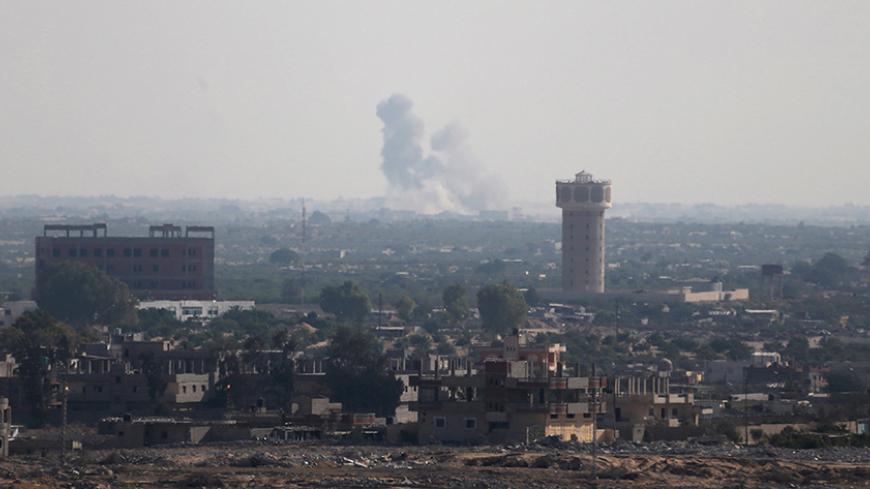 SHEIKH ZUWEID, Egypt — On the morning of July 1, 2015, Sinai witnessed a new series of highly complicated developments, following strategic changes in the ongoing war between the Islamic State affiliates in Egypt, Wilayat Sinai (formerly known as Ansar Bayt al-Maqdis) and the Egyptian army. This step is dangerous because Wilayat Sinai attempted to maneuver on the field to control Sheikh Zuweid city, the second largest city in North Sinai and the most important border city that is less than 15 kilometers (9.3 miles) away from the occupied Palestinian territories.

According to testimonies that Al-Monitor obtained from Sheikh Zuweid locals, Sinai militants took over Sheikh Zuweid areas for more than 10 hours on July 1. They were forced to retreat due to huge losses in their ranks after the battle was settled in favor of the Egyptian air force, which targeted militants while they were positioned between civilian houses in the city.

Mohamed Ali, a Sheikh Zuweid inhabitant, told Al-Monitor, “The militants controlled the city since 7 a.m. until 5 p.m. [on July 1] after they pushed the Egyptian army out, besieged it and forbade it from entering [Sheikh Zuweid]. Most roads were booby-trapped and militants were deployed between inhabited houses.”

Wilayat Sinai’s control of Sheikh Zuweid for over 10 hours begs a question: How did this happen in the city where the Egyptian army has been deployed for the past two years, since the onset of the war against terrorism?

An expert on Sinai affairs and armed militias told Al-Monitor, on condition of anonymity, “The start of the July 1, 2015, war is a field maneuver conducted by Wilayat Sinai to occupy a city under the Egyptian army’s control.”

He noted, “I was told by reliable sources that the plan to control Sheikh Zuweid was set by Wilayat Sinai higher military command and that it is similar to their plans to take over the cities in Iraq and Syria. Wilayat Sinai alerted its members to implement [IS leader Abu Bakr al-Baghdadi] Baghdadi’s next plan and deployed all its militants who are estimated at 200 in Sinai,” he added. “Wilayat Sinai’s plan was made up of several stages. The first stage consists of attacking two army checkpoints along the road connecting Sheikh Zuweid to El-Gorah locale of Multinational Force and Observers (MFO) to incur the biggest number of losses in army ranks and seize the weapons and mechanisms to be used in the advanced stages of the plan. The second stage consisted of waging a simultaneous attack on 10 army checkpoints along the international highway [that] ends at the Rafah crossing with the Gaza Strip. This would be implemented by using machine guns and long-range missiles — a method used to distract and confuse the estimations of troops. In parallel, Wilayat Sinai militants planted mines and bombs along the internal roads of Sheikh Zuweid and their surroundings and the roads connecting them to other cities, and in the vicinity of Al-Zohour camp — the largest military camp in Sinai," he said.

“Sinai province started implementing the plan at 6 a.m. on July 1 by attacking the Abu Refai and Sedra checkpoints in the surroundings of Sheikh Zuweid, and at the same time using a booby-trapped car and pushing around 20 militants to clash with the army at the checkpoints and kill the rest [of the army members] after the invasion of the booby-trapped cars,” he added. 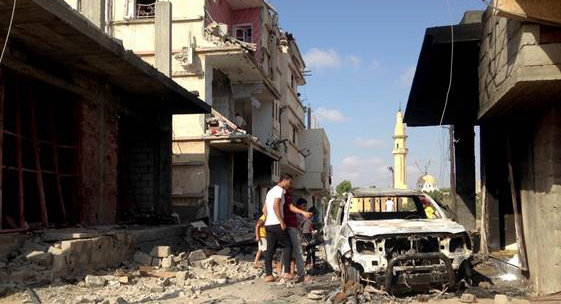 A child inspects the remains of an Islamist militant's vehicle that was targeted by the Egyptian air force in Sheikh Zuweid, July 2, 2015. The bodies of five militants were found beside the car. (Photo by: Anonymous)

According to the same source, “Wilayat Sinai faced some obstacles while trying to implement the first plan. An Egyptian army soldier in Sedra checkpoint detected the booby-trapped car 10 meters [32 feet] before it reached [the target]. He struck it with an RPG, causing it to blow up before arriving. The army violently clashed with Wilayat Sinai militants who were seriously harmed. The other booby-trapped car managed to invade the Abu Refai checkpoint, and Wilayat Sinai finished off the soldiers, seized weapons and videotaped the operation. The second stage happened at the same time. Ten military checkpoints in Sheikh Zuweid and its environs were attacked with machine guns and mortars. This stage aimed at disconcerting the army rather than causing tangible losses,” the source noted.

The third stage that the source thinks helped partially control Sheikh Zuweid city temporarily involved Wilayat Sinai militants planting bombs on all the city’s main roads and byroads as well as those connecting the city to other cities.

The first purpose was to besiege the soldiers positioned in Al-Zhour camp and prevent them from moving or sending military reinforcements to regions of clashes. The second aim was to cut off supplies and military movements between targeted military headquarters and checkpoints to facilitate the mission of finishing off the besieged soldiers. The fourth purpose was to forbid the entry of military reinforcements into the city and prevent the entry of ambulances coming to save the wounded soldiers as a result of the attacks.

The same source believes that Wilayat Sinai failed to proceed with its plan for several reasons. First, the group did not enjoy a popular base in Sheikh Zuweid. Therefore, its scheme to lure the army to the mined roads in Sheikh Zuweid was aborted.

A source close to the troops in Sheikh Zuweid told Al-Monitor that the military forces smelled trouble at first, especially after Wilayat Sinai spread its control on the ground. But the officers in charge of the troops’ moves refused to come out after being alerted by the inhabitants about the mining of all roads, which were practically turned into minefields. The officers felt the presence of a plan aimed at draining ground troops and attempting to control the largest military camp in the city. 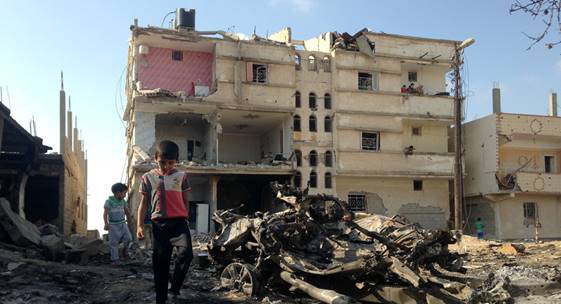 The remains of a car used by Islamic State militants are visible in a Sheikh Zuweid neighborhood, which was damaged in a targeted air strike by the Egyptian air force, July 2, 2015. (Photo by: Anonymous)

Another reason that prompted the retreat of Wilayat Sinai militants and the settlement of the battle in favor of the Egyptian army was because the F-16 Falcons hunted down Wilayat Sinai in the Sheikh Zuweid streets and surroundings, causing great damage. Over 55 militants, including first-rank ones, were killed, and the cries of others asking their fellows to retreat slowly could be heard. They did not expect the combat planes to shell Wilayat Sinai militants while they were positioned among civilians. According to the expert, the raids were accurate, despite the death of some civilians.

“Wilayat Sinai lost a large number of militants and was deeply affected. This was a catastrophe for the group compared to the low overall number of militants [in Sinai]. But Wilayat Sinai will try to expand its activities to send out messages to the media to the effect that it wasn’t affected or defeated. But it will definitely need several months to make up for the ammunition and human losses in its ranks, depending on the injustices that the Egyptian regime will deal to the people and that will constitute a breeding ground for militants,” the expert said.