Egypt considers Hamas to be a vital and integral partner in the war that it is waging with Israel against the international jihadist movement, its branches in the Sinai Peninsula and the Salafist cells that started flourishing in the Gaza Strip recently. 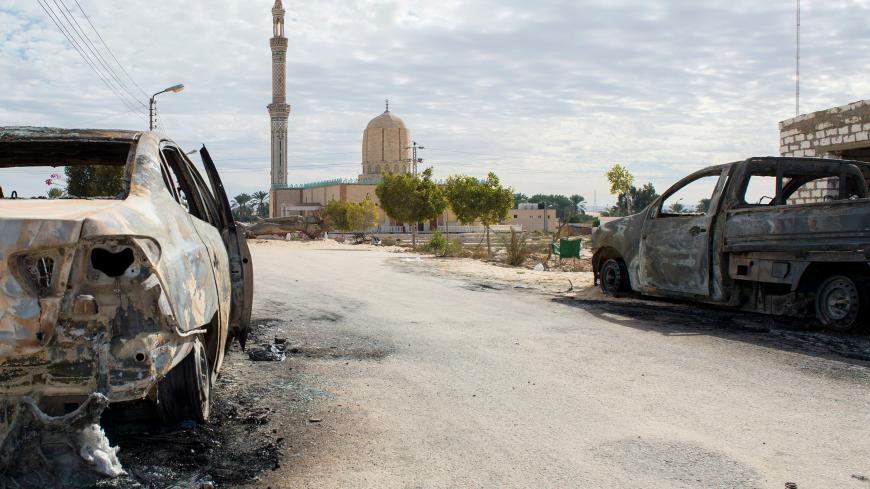 Suicide attacks were one of the major “weapons” in the Hamas arsenal during the second intifada (2000-2005). In the last two years, however, such attacks have become a double-edge sword, with them being used to strike at Hamas on two separate occasions. The most recent of these attacks happened Aug. 27, when two Salafist suicide bombers blew themselves up beside two separate police positions manned by Hamas forces. The blasts killed three members of the Hamas forces.

The first time a suicide attack was used against Hamas occurred two years ago, in August 2017. A suicide bomber blew himself up along the Rafah border crossing with Egypt, killing a high-ranking officer in the Izz ad-Din al-Qassam Brigades, Hamas' military wing. The attack left the Hamas leadership in shock. They immediately released a statement, saying, “Ground commander Nidal al-Jaafari was killed by one of those people possessing an ideology that veers from the straight and narrow path, who blew himself up beside a [Hamas] security team operating on the border between the Gaza Strip and Egypt."

The Salafist terrorist was not called a "shahid," or "martyr," in the statement; he was referred to instead as “possessing an ideology,” by which Hamas means Salafist groups that first emerged in the Sinai Peninsula and managed to establish underground cells in the Gaza Strip. In the spirit of these times, they are frequently referred to as “recalcitrant” or “rogue.’’ They believe Hamas is an organization that veered off course, by abandoning the principles of jihad and by collaborating with Egypt, which hunts down Salafists mercilessly, and of course, with Israel. Salafists consider this unholy trinity of Israel, Egypt and Hamas to be heretics and enemies equally deserving of death in the name of Allah.

The terrorist attack at the Rafah border crossing two years ago took place after Hamas started drawing closer to Egypt. The movement’s leaders made a commitment to break off all contact with the international jihadist movement — the Islamic State (IS) and all its subsidiaries — in exchange for its removal from the list of terrorist organizations put together by Egypt. Remarkably, Hamas even chose to cut itself off from its own parent movement, the Muslim Brotherhood, just to appease Egyptian President Abdel Fattah al-Sisi. Likewise, it committed itself to cooperating with Egyptian intelligence and preventing the smuggling of arms to and from Gaza. Almost overnight, members of the Hamas military wing, who were once allies of those “possessing the ideology,” suddenly became their enemies.

The two suicide bombers, who blew themselves up in Gaza this week, were not originally from Egypt. They were homegrown terrorists operating among their own people — Palestinian Muslim believers. The immediate suspects in the planning of this attack were also local Salafist organizations. Given the Hamas policy of restraint over the past few months and its promotion of an arrangement with Israel, these rogue groups have been welcoming “Hamas renegades,” who quit the organization once they determined that it had “veered off course.”

Following this week’s attack, Hamas launched a comprehensive wave of arrests throughout the Gaza Strip. Until only recently, the organization has actually avoided arresting Salafist activists, or “renegades,” out of concern that hunting and arresting them would only strengthen opponents of the Hamas regime and reinforce the claim that Hamas has abandoned the jihadist path. But now terror has struck them in their soft underbelly, proving that suicide bombers can attack the very people who once sanctified and praised the weapon of martyrdom, and that they will attack them in order to promote their own objectives and establish themselves in the internal Palestinian arena.

Since each Salafist cell consists of no more than a few dozen active members, tracking and collecting intelligence about them is a very difficult prospect. The Salafist groups Ansar Bayt al-Maqdis Sinai and Jaish al-Ummah (Army of the People) diverged over the last few years in response to changes that took place with IS during the Syrian civil war and the Islamists’ defeat in Iraq. It takes intense effort to get precise intelligence about their activities, so Israel and Egypt cooperate in this endeavor. Efficient security cooperation between the two countries has improved their relationship significantly. It has heated up an otherwise cold peace between them, for the common interest of combatting the international jihadist movement and those Salafist organizations that have turned Sinai into their base.

According to a 2018 New York Times report, Israel had launched aerial attacks on Egyptian territory over one hundred times since 2016, with the goal of assisting the Sisi regime in its war against the Salafists. This Israeli aid began after the downing of a Russian airliner in October 2015, in what was considered to be IS' boldest and most deadly attack in Sinai. The Times report also claimed that Israeli attacks sometimes take place more than once a week, with Sisi’s full approval.

In a CBS interview during his visit to Washington in January, Sisi admitted that cooperation with Israel has been expanded. It should be noted that this cooperation does not only involve allowing Israeli fighter jets into Egyptian airspace or Egyptian troops into Sinai's demilitarized zone. Mossad Director Yossi Cohen and Shin Bet Director Nadav Argaman both visit Egypt for work-related talks regularly, sometimes even more than once a month.

There is a third side to this security cooperation, and that is Hamas. Egypt plays a key role in the complex and erratic relationship between Israel and Hamas, serving as an active mediator and as a restraint. It regards the group that rules Gaza as a vital and integral partner in the war that it is waging with Israel against the international jihadist movement, its branches in Sinai and the Salafist cells that are flourishing in Gaza. Were it not for this joint objective, it is doubtful that Sisi would feel the slightest pity for Hamas, a group cast from the same material as his own country’s Muslim Brotherhood.

The same is true of Israel. It has almost the same reasons for keeping Hamas in power in Gaza all these years. That's why it avoided toppling the Hamas regime, even during the biggest military operations in the Gaza Strip. Israel fears that the vacuum left by Hamas — if the group is removed from power — will be filled by local Salafist organizations and that this would constitute a serious security threat to Israel. There will be no one in Gaza to restrain the new regime, or any responsible authority to put the fear of God into it. That's why everyone agrees that removing the threat posed to Hamas by Salafist organizations in Gaza and Sinai is in both Egypt's and Israel’s interest.

Israel is also well aware that information collected by its own intelligence could find its way to the Hamas leadership. This will not happen directly, of course. Rather, it would be given to them by Egypt’s intelligence agencies, but with Israel’s knowledge and consent. It is the very essence of a paradox.

If Hamas is ever to take on an enemy it shares with Egypt and Israel, an enemy that could, at some point, launch terrorist attacks and send suicide bombers against the two countries, the right thing to do would be to provide it with sensitive intelligence, even if Egypt and Israel put hard work into collecting that intelligence in the first place. The relationship between Israel and Hamas is tangled and complex, with all sorts of remarkable twists and turns.