Hamas is discussing steps it could take if Egypt decides to attack the Gaza Strip, as hinted by the Egyptian army, following the country's decision to declare Hamas a terrorist organization. 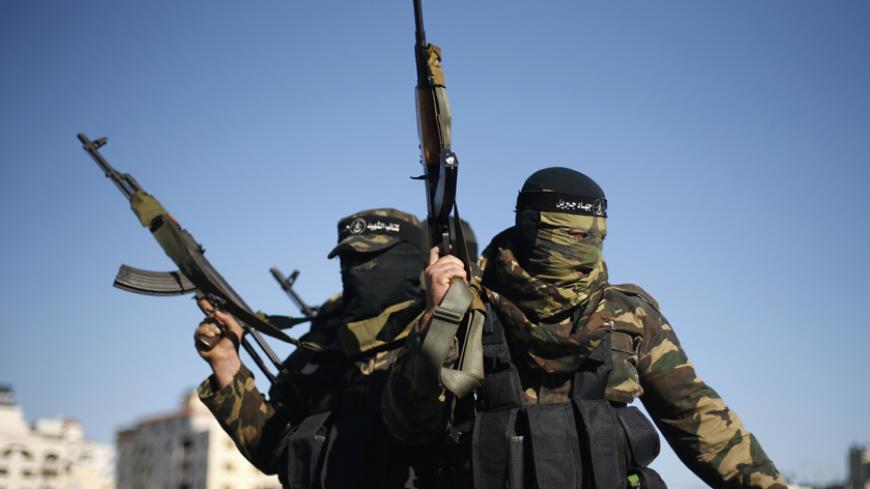 Hamas never imagined that it would be classified as a terrorist movement by an Arab country — a classification that has dangerous political, media and perhaps military repercussions.

However, Egypt’s Court of Urgent Matters declared Hamas a terrorist organization on Feb. 28 against the backdrop of the proven movement’s implication in armed operations that claimed the lives of Egyptian officers and soldiers in Sinai Peninsula, after its members seeped through the tunnels into Egypt.

Why is this decision dangerous? Egypt is considered the only leeway for Gaza where Hamas is in control. Egypt’s classification of Hamas as a terrorist organization implies that all efforts are being made to cut off its arms supplies and funding by all means necessary. Moreover, whoever cooperates with Hamas is considered a criminal by law, according to a statement on March 4 by Egypt’s Minister of Justice Mahfouz Saber. The law stipulates seizing Hamas properties, arresting all its affiliated members and confiscating their funds and locations.

As soon as the decision was issued, Hamas condemned it and Ismail Radwan, the former minister of awqaf and religious affairs and Hamas spokesman, told Al-Monitor, “The Egyptian decision constitutes a service handed to the Israeli occupation on a silver platter. Moreover, it has exported Egypt’s internal crises abroad. But Hamas won’t get carried away with side wars, and its weapons will remain directed against the occupation.”

Hamas spokesman Sami Abu Zuhri described on Feb. 28 the Egyptian decision as shocking and dangerous. He said that it targets the Palestinian people and their resistance and turns the tables, making the occupation a friend and the Palestinian people a foe. The decision shames Egypt and tarnishes its reputation, but it will not affect Hamas’ status.

Hamas did not only make political statements condemning Egypt’s decision, but also staged several public protests and mass marches all over the Gaza Strip after Egypt took this decision.

A high-ranking security source in Gaza told Al-Monitor on condition of anonymity, “The security apparatus in Gaza has in its possession documents condemning some officials in the Palestinian Authority [PA] who provided the Egyptian media with fabricated reports about an alleged role of Hamas in Egypt.”

However, the most important statement issued by Hamas came from its former Prime Minister Ismail Haniyeh on March 3, when he underlined that Hamas is making calls to rectify the historical mistake in Egypt’s decision that is in direct conflict with Egyptian-Palestinian relations. Hamas is dealing patiently and wisely with the issue to right this wrong that neither suits the Arab nation nor Palestine.

Hamas has started pulling diplomatic strings from behind the scenes with influential states in the region, such as Saudi Arabia, to pressure Egypt to take back its decision. Al-Monitor had previously quoted some of Hamas’ internal sources expressing optimism about Saudi Arabia’s new role under the reign of King Salman bin Abdul-Aziz Al Saud, hoping for a more balanced stance on the part of the kingdom.

Hamas is making regional calls to stop the Egyptian decision, but the problem is that its main allies in the region, notably Turkey and Qatar, have a bad and tense relationship with Egypt. Therefore, Hamas is mainly hanging its hopes on Saudi Arabia, which is the most influential player in Egypt.

Hamas has warned against expected repercussions on the ground with a possible military attack on the Gaza Strip, which according to an Egyptian anchorman close to the regime's security circles could take place on April 1.

Hamas member of parliament Yahya Moussa, the chairman of the Legislative Council’s Oversight Committee, told Al-Monitor, “I rule out the possibility of a military attack waged by Egypt, despite information confirming otherwise. I personally believe that such a crazy act will not happen since the Egyptian regime can easily do without it.”

However, Mousa Abu Marzouk, the deputy chairman of Hamas’ political bureau, who is currently in Egypt, said on March 1 that the Egyptian decision against Hamas is a prelude to its intention to attack Gaza.

Meanwhile, Radwan told Al-Monitor, “The Gaza Strip and Hamas will not take things lying down, although we don’t think the Egyptian army will get involved in massacres against Palestinians. Whoever is threatening Hamas should perhaps recall the bitter experience of the Israeli army in the face of [Izz ad-Din] al-Qassam Brigades.”

Hamas, despite having publicly declared the unlikelihood of an Egyptian military attack against it in Gaza, has taken precautions in case such a catastrophic scenario occurs.

Maj. Gen. Abu Ubaidah ibn al-Jarrah, leader of the Palestinian security forces, said on March 5 that there has been security mobilization, while security sites stretching along the border with Egypt have been fortified so as to control the border, preventing any security incident from taking place. He also denied any direct contact with the Egyptian army during the ongoing patrols and activities on the border between the two countries.

The security measures by Hamas on the border with Egypt aim at preventing any infiltration from and into Sinai, as the movement fears to be dragged into an Egyptian internal conflict, which would have significantly negative consequences.

Wael Attiya, Egypt’s ambassador to the PA, said on March 3 that the media statements regarding the Egyptian army’s intention to target certain locations in Gaza does not express the official Egyptian stance because such plans are not on the agenda of Egypt’s political leadership.

In the past few days, Al-Monitor has learned of an internal position assessment that Hamas was circulating, but that has not been reported in the media. The assessment stated that there were several scenarios as to how Hamas would deal with a possible Egyptian attack on Gaza. Hamas could keep silent about the possible attack that would most likely be an airstrike without a ground offensive, or it could respond in a way that is in line with the magnitude and depth of the Egyptian attack. Hamas could also direct its response at Israel, so that the latter pressures Egypt to stop its attack on Gaza.

“All the previous scenarios have advantages and disadvantages, but Hamas will be careful to take the road that does not lead to a clash with the Egyptian army, as this option would be very costly,” the internal assessment stated.

Finally, Hamas knows very well that Egypt’s recent decision against it will likely kill any chance of communication between both parties and dismiss a possible Egyptian role in the Palestinian reconciliation, truce with Israel and reconstruction of the Gaza Strip. This decision increases the possibility of an armed clash between al-Qassam Brigades and the Egyptian army, which is something that Hamas does not want.

Hamas is consistently practicing restraint vis-a-vis the official Egyptian enmity against it, either by toning down and controlling its reactions and steering clear of anger, or by increasing its calls with Arab states to pressure Egypt. At the same time, it is seeking to take any step that would keep the confrontation with Egypt at bay.