The Israel-Egypt-Hamas Triangle in the Sinai

The threat posed by Salafists and other jihadists in the northern Sinai has resulted in Hamas, Egypt and Israel recognizing their mutual interests. 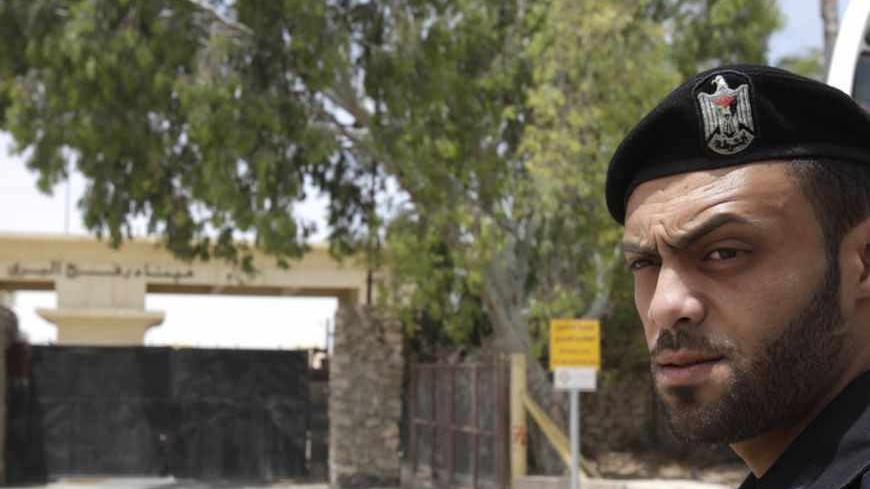 A member of Hamas' security forces stands guard in front of the closed gate of the Rafah crossing with Egypt, in the southern Gaza Strip, May 17, 2013. - REUTERS/Ibraheem Abu Mustafa

In late July 2012, Ismail Haniyeh, the Hamas prime minister in Gaza, paid a visit to Cairo. He was quite proud of himself and pleased to be there. Mohammed Morsi, or Haniyeh's “Brother,” as the Palestinian called him, had just been elected president of Egypt. Haniyeh, like all the other leaders of Hamas, and in fact, all the people of Gaza, thought that this would be the dawn of a new era in the troubled relationship between Gaza and Egypt. It was an egregious error on his part.

The conversation between Haniyeh and President Morsi was not an easy one. The standard tokens of mutual respect and traditional greetings and pleasantries quickly deteriorated into a scathing dialogue during which Haniyeh could only conclude that Gaza would not appear anywhere near the top of Morsi’s list of priorities. By the time he realized that Morsi was concerned first and foremost with the interests of Egypt and the Muslim Brotherhood, and less with the problems of Gaza, it was too late.

In other words, the Rafah border crossing would not be swung open to accommodate free movement between the Gaza Strip and Egypt. Even more disconcerting, however, was that Morsi put Haniyeh and his movement on probation, during which time they would have to prove that they posed no risk to Egypt’s security. In particular, they were expected to offer proof that Hamas and its Izz al-Din al-Qassam Brigades did not have a foothold in the Sinai through links to Salafist groups and Global Jihad cells operating out of the no-man’s land where the borders of Israel, Gaza and Egypt converge.

Haniyeh returned to Gaza utterly humiliated. One tangible expression of his frustration with Egypt appeared immediately throughout the Gaza Strip. Billboards depicting Haniyeh and Morsi standing side by side were quickly replaced. Morsi’s image was pulled down and the photo of another “brother,” Turkish Prime Minister Recep Tayyip Erdogan, replaced it.

Then, one week after the disappointing meeting between Haniyeh and Morsi, a terrorist attack took place in the Sinai, on August 5, proving to Morsi that his gut feeling had not deceived him. Armed jihadists, apparently trained in Gaza, infiltrated an Egyptian police station in the northern half of the peninsula and murdered 16 policemen and soldiers. They then seized an armored personnel carrier and burst across the Israeli border in an attempt to carry out another attack there. They were finally stopped and killed near the Kerem Shalom Crossing. This incident was a formative moment in the relationship between Egypt and Gaza. According to a report published at the time in Al-Ahram, Morsi issued a stern warning to Hamas, using the following ominous language: “May God help you if we find your fingerprints on what happened in the Sinai.”

Since that attack, there has been a chill in the relationship between Morsi’s Egypt and Hamas. It could even be considered chillier than the relationship that existed during the days of former Egyptian president Hosni Mubarak. While the parties maintained an outward appearance of friendship and solidarity among the "Muslim Brotherhood," on a deeper level they were both extremely suspicious of each other. Expressions of this could be seen on the Egyptian side as well. The border crossings remained closed, and Palestinians wanting to leave Gaza through the Rafah crossing were subject to meticulous inspections.

At this point, there was another twist in the plot. The Egyptians gradually discovered that Hamas is a complex organization, with numerous leaders and “sub-leaders,” each pulling in his own direction. Although Haniyeh is prime minister, there are different streams within Hamas' military branch, the Izz al-Din al-Qassam Brigades, some of which apparently cooperate with their Salafist brothers elsewhere. The connection is informal, not guided from above. It is damaging to Hamas, and yet, despite all that, it exists in the field. As it turned out, ties are constantly being forged between militants of all stripes in the refugee camps and tunnels of Gaza through a system of give and take.

This system was exposed again on May 16, 2013, and once again the target was Egyptian policemen in the Sinai. Seven of them were kidnapped in a sophisticated commando attack by armed Bedouins, who demanded the release of prisoners, including Sheikh Abu Shita, who has been sentenced to death for the murder of an Egyptian police officer in al-Arish. Once again, an accusing finger was pointed at Hamas, with claims that the Bedouins did not act alone and therefore but must have received help from Izz al-Din al-Qassam activists in the Gaza Strip.

So the Sinai has become a triangle where the interests of Egypt, Hamas and Israel converge. It is now clear to Morsi, who still has a hard time saying the word “Israel,” that cooperating with Israel against a common enemy is the logical thing to do. That is also the reason why, when the Egyptian army attacked Global Jihad cells in the Sinai, there was close cooperation between Israel and Egypt. This goes beyond the exceptional permission that Israel granted Egypt to use jets and helicopters against Salafist strongholds in a zone that the peace agreement says should be demilitarized.

It suddenly became clear that all the dire warnings bandied about when Morsi rose to power, such as the peace treaty with Egypt not being on stable footing, were not necessarily realistic. It was proved yet again that the reality of the Middle East tends to create strange bedfellows. Morsi may be a member of the Muslim Brotherhood, but as far as he is concerned, Israel is still preferable to al-Qaeda cells in his backyard, where the borders of Israel, Gaza and Egypt converge.

As written here on more than one occasion, Hamas has an interest in this too. Hamas has turned its back on the suicide bombings that characterized the movement in the past. It is now looking to obtain international recognition and control over the Palestinian Authority (through the electoral process). Right now its leaders are doing everything they can to shake off the Salafists and prove to Morsi that they had no role whatsoever in the terrorist attacks in the Sinai. Right now Israel is their logical partner as well, at least as far as they are concerned.

Over the last few weeks, Hamas has tightened its supervision over the smuggling tunnels in Rafah, and its people conduct raids and searches along the border with Egypt. Spot checks are even being conducted within the Izz al-Din al-Qassam Brigades to determine whether there are any “bad apples” collaborating with the Salafists and Global Jihad activists in Gaza and the Sinai.

Hamas will do everything to prove to Morsi that it is meeting the terms of its probation. Haniyeh is waiting to return to Egypt for another meeting with Morsi to prove to him that Hamas has no fingerprints on anything happening in the Sinai.

Thus, without anyone even imagining it, there has been surprising cooperation among Egypt, Israel and Hamas, in the effort to restore control over the Sinai. That is in everyone’s interest.

Since we’re already talking about what one can imagine, consider also the possibility of another meeting, this one between Egyptian President Morsi and Israeli Prime Minister Benjamin Netanyahu. Imagine the two of them coming out of a private meeting and declaring at a press conference, “We have successfully contained terrorism in the Sinai.”

Even without press conferences and declarations, it is evident that the war in the Sinai is holding the peace with Egypt together more than just about anything else, if only because the parties share a common interest.