Hamas in the Gaza Strip broadcast a video where two Islamic State members confessed to working for IS, which reveals a new phase in the relationship between the two groups. 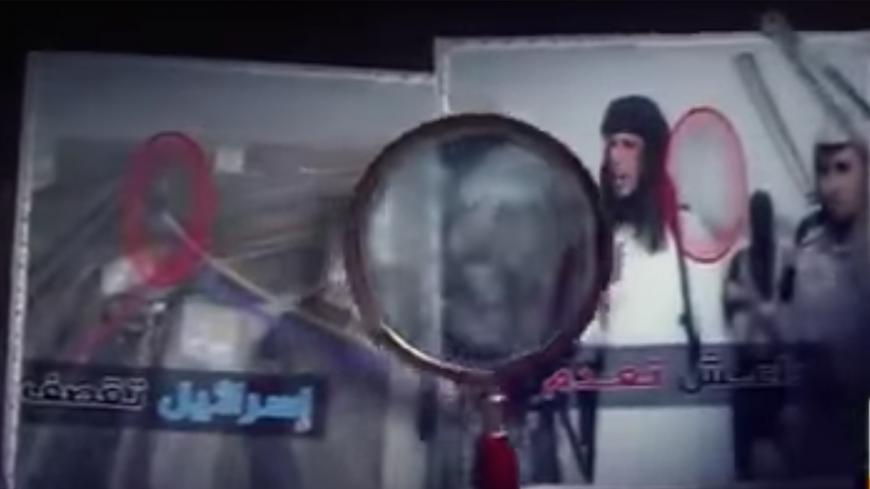 On Jan. 25, Hamas’ internal security service in the Gaza Strip posted a video on its Facebook page of two alleged Islamic State (IS) members, titled, “IS surrounds Gaza from the south and Israel surrounds the rest.”

The video included confessions by two men, one of whom had his face blurred out and admitted to having joined IS in the Sinai Peninsula seven months earlier and was in charge of seizing weapons being smuggled into Gaza. The second confessed to sneaking into Sinai from Gaza in late 2016 and moving around in several areas before settling near the border with Gaza to prevent goods from being smuggled into the Gaza Strip.

Prior to Hamas publishing the video, IS in Sinai broadcast on Jan. 4 a video threatening Hamas and executing an IS member for allegedly providing weapons to Izz ad-Din al-Qassam Brigades, Hamas’ armed wing. In the video, IS also called on its members to target the “infidel movement,” Hamas, by all means, including bombs and explosives.

Islam Shahwan, a professor of security sciences at Al-Awda University College in Gaza, told Al-Monitor, “Hamas might have published these confessions for fear of being attacked by IS. It seems it [Hamas] wanted to prepare Palestinians about [Hamas] attacking [IS], which is inciting against Hamas. The movement could also be warning Palestinians against joining the ranks of IS.”

Shahwan added, “Meanwhile, some Palestinians believe regional and international parties want to push Hamas into foreign security conflicts in order to drain it militarily and thus achieve Israeli interests by distracting the movement from confronting Israel.”

Some Palestinians believe that Israel is trying to drag Hamas into an armed confrontation with IS, amid Palestinian claims of IS committing regional, Israeli and US security breaches, despite the lack of evidence.

However, in December 2017, groups Hamas claimed were affiliated with IS fired rockets from Gaza toward Israel, to which Israel responded by targeting Hamas positions in Gaza, forcing the movement to arrest IS affiliates.

Director General of the security forces in Gaza Maj. Gen. Tawfiq Abu Naim stressed on Feb. 7 that the Gaza security apparatus is following up on individual cases of extremist behavior, in reference to IS affiliates.

Abu Naim pointed out that the security services are eliminating suspicious parties associated with Israel and seeking to corrupt the Palestinian society in the Gaza Strip.

The security services have recently been heavily present in Gaza’s streets, where they erected field barriers in anticipation of any operation or attack carried out by IS affiliates. Prior to this action, a security official told Ultra Palestine on condition of anonymity on Feb. 9 that 10 IS members snuck into Gaza from Sinai and the security services are now out to capture them.

Al-Akhbar newspaper reported on Jan. 17 that al-Qassam Brigades formed an emergency cell and a rapid intervention force to prevent IS members from carrying out any action in Gaza, be it an attack or an assassination attempt.

Maj. Gen. Wasef Erekat, a Palestinian military expert in the West Bank and former artillery commander of the PLO, told Al-Monitor, “Hamas might have published these confessions for security purposes, but I do not see a justification for exaggerating IS’ potential in the Gaza Strip. Hamas is the one with the military resources and logistical capabilities, which allows it to easily control IS members without being overwhelmed by internal security problems.”

He added, “The Palestinian public opinion does not adopt IS’ version of the political and military events that are taking place in the region.”

Aman, an Egyptian website specializing in armed group affairs, reported on Feb. 7 that the Egyptian security services had arrested 18 IS members trying to sneak into the Gaza Strip where they planned to bomb Al-Abyad Mosque in the Beach refugee camp in western Gaza where Ismail Haniyeh, the head of Hamas’ political bureau, prays.

Al-Monitor tried to get Hamas to comment on this news, but none of its spokesmen agreed to comment, nor did Hamas-affiliated media address it.

Meanwhile, Hamas leader Sami Abu Zuhri said on Feb. 11 that the meetings taking place in Cairo between a delegation from the movement and Egyptian officials are tackling several files, notably the humanitarian situation in Gaza and Egyptian-Palestinian border control.

A supporter of IS ideology in Gaza told Al-Monitor on condition of anonymity, “Over the past few years, Hamas and IS have reached many understandings that were not made public, the purpose of which was to spare Gaza security problems with local and foreign parties. But these understandings are quickly falling apart, probably because Hamas accuses IS of wanting to involve it in side battles with Israel and Egypt.”

Ahmed Yousef, a former political adviser to Haniyeh, told Al-Monitor, “Hamas and groups close to IS reached understandings in 2015 to find common ground. But these understandings did not hold up as these groups’ behavior threatened the stability of the Gaza Strip as well as they rejected the Hamas-Egypt coordination since June 2017 to control the Gaza-Sinai borders.”

Yousef added, “This is why these groups [IS] started perceiving Hamas and Egypt as a single enemy that must be targeted, the result of which Hamas’ relationship with IS-affiliated groups started going downhill.”

The crisis between Hamas and IS intensified after Hamas reached an agreement with Egypt in June 2017 to control the Gaza-Sinai borders and establish a buffer zone 100 meters (328 feet) deep on both sides.

IS could have seen this as Hamas showing hostility since this buffer zone would prevent IS members from moving between the two areas. Consequently, IS kidnapped Palestinian workers suspected of being affiliated to Hamas in October 2017 from the tunnel area with Sinai, after which the security services in Rafah arrested five IS members, namely Nour Issa, on Oct. 7.

Col. Zaki al-Sharif, the deputy head of the Political Guidance Department at the Ministry of Interior in Gaza, told Al-Monitor, “There are around 200 individuals close to IS in Gaza; they do not have an organized structure and can be described as isolated cases, not a phenomenon. The ministry is either engaging in direct dialogue with them and holding debates and lectures, or putting them under security surveillance.”

Hamas’ choice to broadcast the confessions could indicate that the movement is entering a new phase in its relationship with IS — the phase of ultimate confrontation. It seems Hamas is concerned about the successive security developments in the region after Egypt launched on Feb. 9 a large-scale military operation in Sinai to pursue armed groups, especially since Hamas wants to avoid giving IS the opportunity to involve it in the current Egyptian events.