Hamas tries to make nice with Egypt to focus on intifada

The Egyptian army in Sinai continues its operations against Hamas members, but the movement says it has no interest in clashing with Egypt and has turned its attention to the budding intifada in the West Bank. 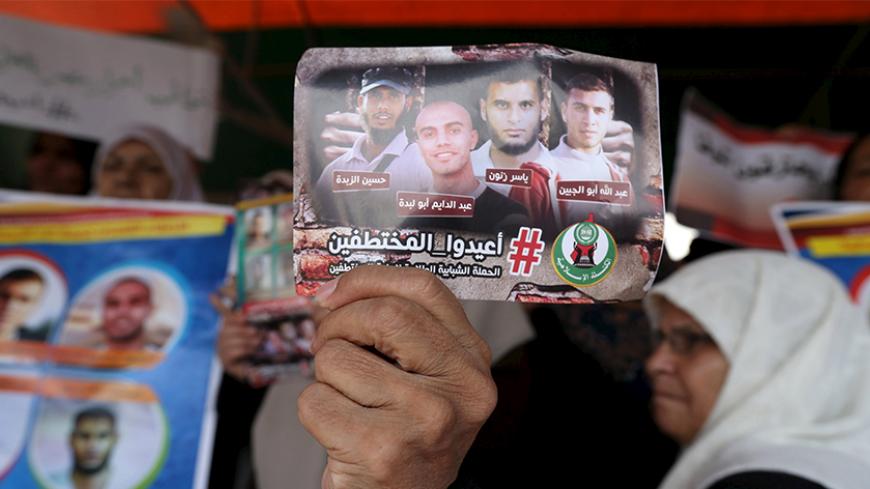 A Palestinian woman holds a picture on Sept. 13, 2015, during a protest at the Rafah crossing between Egypt and the southern Gaza Strip calling for the release of four Palestinians abducted in August in Egypt's Sinai. - REUTERS/Ibraheem Abu Mustafa

Many people have been killed and more wounded in recent months during attacks between the Egyptian military and armed groups along the Sinai-Gaza border, despite Egyptian forces’ security measures. Egypt has accused armed groups in Gaza in the attacks, according to security sources who spoke on condition of anonymity this month.

Although Izz ad-Din al-Qassam Brigades, Hamas’ armed wing, has long denied such accusations, Gaza-Egypt relations have gone downhill as the military has maintained operations along the border since February.

On Sept. 11 in Gaza, the Egyptian military killed more than 98 militants affiliated with armed groups, while Wilayat Sinai (Sinai Province), a group affiliated with the Islamic State (IS), took responsibility for killing two Egyptian soldiers and wounding others Oct. 4 in Arish. The Egyptian military arrested three Palestinians Oct. 15 after setting up an ambush in one of the tunnels on Gaza’s borders.

But Hamas spokesman Husam Badran recently told Al-Monitor it is concentrating on Israel, not Egypt. “The resistance, spearheaded by Hamas, in Gaza knows its goal well. Its military force has one target — Israel — and Hamas’ foreign relations with Egypt aim at protecting the Palestinians’ interests and alleviating their constant suffering.”

Hamas is focusing on Israeli-Palestinian confrontations that have been raging in the West Bank and Jerusalem since the beginning of October. It does not want to be preoccupied with field incidents along Gaza’s borders with Egypt, as its aim is to mobilize the Arab countries to support an intifada and avoid dispersing political efforts in several directions.

Perhaps the recent clashes between the Palestinians and Israelis have shifted attention away from ongoing tensions between Egypt and Gaza. But, Palestinians are still concerned that the tensions with Cairo might escalate. Hamas appears to be trying to improve relations with neighboring countries, specifically Egypt, which — after all — controls the lifeline that connects Palestinians to Gaza through the Rafah crossing.

“Any tensions along the Gaza-Egypt borders are not in either’s interests," Osama Hamdan, Hamas’ foreign relations chief, told Al-Monitor. "The [blockade of the Palestinian people] serves Israel, and a Palestinian-Egyptian understanding is [crucial] for providing the needs of the Palestinian people, facilitating their moves and, at the same time, helping Egypt control its security.”

Another development that increased tension between Hamas and Egypt came when anonymous armed men abducted four Palestinians on Aug. 19 after targeting a bus that was transporting them from the Rafah crossing toward Cairo International Airport. Al-Qassam Brigades declared Aug. 22 that the abduction would not go unnoticed and indicated the abducted men were members of its ranks.

Ghazi Hamad, Foreign Ministry undersecretary in Gaza, told Al-Monitor, “The ongoing abduction of Palestinians in Egypt for two months is a mystery raising dangerous questions about their future. Hamas has a deep-seated conviction that no [Hamas] armed groups were involved in the abduction. There are several possibilities that push us to seriously think that this is a huge premeditated operation with political and security dimensions [that] might have serious future repercussions.”

It is no secret that Palestinians are abducted to a closed security stronghold under the Egyptian army’s control. It would seem difficult for an armed group to abduct them, because this would mean Egypt has lost its security grip on a highly sensitive region near the Rafah crossing and on its shared borders with Gaza and Israel.

Al-Monitor learned through internal discussions held among sources close to Hamas about the possibility of Israel’s implication in the abduction, as the abducted members belonged to the naval commandos and played a vital role in the 2014 Israeli war on Gaza.

This might indicate high security coordination between Cairo and Tel Aviv, and Hamas fell in the trap this time. The incident has confused Hamas, which does not know how to respond. Any step it takes to rescue the abductees will necessarily result in a security or military clash with Egypt, which is possibly the last thing Hamas wants now.

On Sept. 18, Egypt dug a water canal along the southern borders of Gaza to remove the remaining tunnels used for smuggling. The 14-kilometer (8.7 mile) canal is located at the entrances of the Rafah region and passes through several Palestinian neighborhoods.

Ismail Haniyeh, deputy chairman of Hamas’ political bureau, said Sept. 24 that the water canal harms Egypt’s role in the Palestinian case. Iyad al-Bazm, spokesman for Gaza’s Ministry of Interior, told Al-Monitor, “The water canal is a destructive project that threatens Palestinian security forces' losing control of Gaza’s borders. Some of the [Palestinian security] forces' field positions and military towers on the border between Gaza and Egypt were damaged due to landslides.”

Badran tried to clarify the movement’s stance toward Egypt, saying, “Nothing justifies Egypt’s escalated negative steps toward Gaza. No party in Gaza has been proven to have [a] role in the ongoing incidents between Egypt and Sinai. All the Egyptian measures harm the Palestinian people and have no military or security interest for Egypt.”

Even before the clashes between Palestinians and Israelis broke out, it seemed clear Hamas was not trying to stir the pot with Egypt in the field. Hamas feels there is a scheme to drag it into clashes with Egypt, but it is deploying political efforts to rectify relations. The movement believes in Egypt’s importance on the political level, as it is one of the largest Arab countries, and on the survival level, given the shared borders between Egypt and Gaza. Hamas has possibly decided to freeze the conflict with Egypt until further notice because its main priority is to fight Israel.