Some Hamas officials have moved to calm tensions with Egypt's army, but not without heated internal debate. 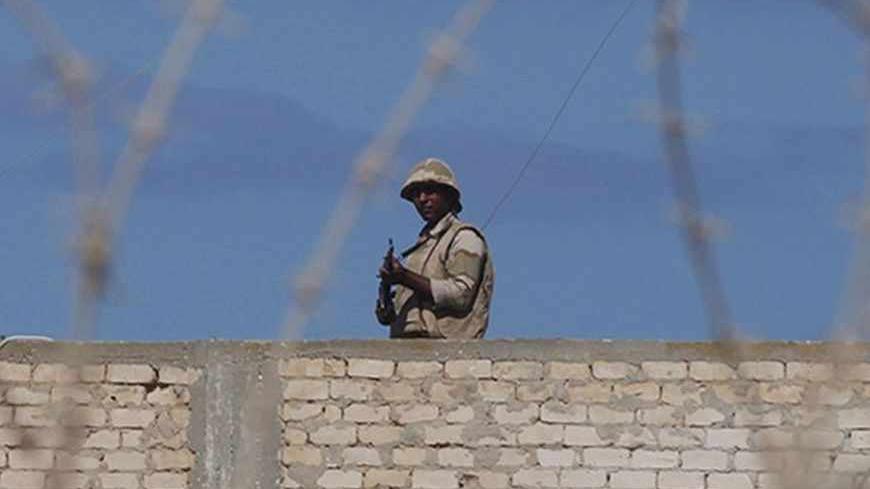 After the Egyptian army deposed President Mohammed Morsi on July 3, Hamas felt as if it had been struck by an earthquake.

These fears became reality when the Egyptian authorities closed the Rafah border crossing and destroyed 80% of the tunnels that link Gaza with Sinai. Furthermore, a propaganda offensive was unleashed against the Palestinians in the Egyptian media, the last chapter of which was talk about establishing a security buffer zone between Egypt and Gaza.

More than two months after the events in Egypt, some Hamas members who met with Al-Monitor in Gaza feel that the situation with Egypt is beginning to stabilize despite the tense security atmosphere and declining economic situation engendered by a slew of factors. Most significant among these are: the intensity of security pressure on the Muslim Brotherhood inside Egypt; the amount of internal decisions adopted by the interim regime, such as the appointment of a constitutional committee and preparations to set parliamentary election dates; and the preoccupation of Arab countries and the international community with the Syrian file at the expense of the Egyptian one.

As a result, serious discussions have been underway lately among among leadership circles within Hamas about opening a new page to deal with the Egyptian developments in an attempt to ease tensions, according to a Hamas official who spoke with Al-Monitor. These discussions have included various governmental and organizational circles, as well as media figures and those on the ground. There is also an understanding that the Palestinians have the most to lose from the ongoing Egyptian actions.

Mousa Abu Marzouk, the deputy chairman of Hamas’ political bureau, publicly apologized to the Egyptian army in an unprecedented interview on the Egyptian Dream channel at the beginning of September. During the interview, he apologized for any affront, which he considered a “red line.” He also rejected any criticism of Gen. Abdel Fatah al-Sisi by some Hamas figures, whom he stressed must be held accountable.

In addition, Al-Monitor has learned that a fierce debate ensued in Hamas following Marzouk’s apology to the Egyptians. Some saw it as an unacceptable concession, though many sympathized with the man’s sensitive geographical predicament since he still resides in Cairo and was appearing on a television channel that openly expresses its animosity toward the Muslim Brotherhood. Others considered Marzouk to be the mediator of a truce between the two sides.

Egyptian press also alluded to an angry message sent by Hamas’ leadership abroad to its counterpart in Gaza, warning it against openly showing support for the Muslim Brotherhood. It also asked it to cease activities aimed at supporting the latter and to refrain from making statements or organizing demonstrations against the Egyptian army.

Al-Monitor’s source inside Hamas refused to confirm or deny the message. Leaks such as this, however, indicate that the Egyptian situation has been prioritized over the movement’s internal discussions. This is particularly so as Hamas is negatively impacted by all Egyptian measures taken against the Gaza Strip.

Yet, the most noteworthy development on Hamas’ part took the form of a visit by Gaza Prime Minister Ismail Haniyeh to the Egyptian border last Friday, Sept. 13, at the head of a delegation that included MPs, ministers and directors of security agencies. He saw excavators and Egyptian military vehicles parked on the other side of the border near the Salahuddin border crossing firsthand. From there, he called on Palestinian security forces to show restraint and secure the border with what he called “sisterly Egypt.”

In another development, the minister of religious endowments in Gaza’s cabinet, Ismail Radwan, called on all preachers to refrain from mentioning Egypt during religious classes and Friday sermons in a manner that might raise the ire of Egyptians.

It should be noted here that mosque preachers, albeit unofficially, announce Hamas’ political stances and disseminate information the movement wants to deliver to the hundreds of thousands of Palestinians who come to pray every Friday.

Hamas has also reduced the intensity of statements warning about the Egyptian army conducting a military offensive against the Gaza Strip. One of its leaders, Salah Bardawil, affirmed on Sept. 6 that such an offensive was unlikely to occur. “We have no fear whatsoever that Egypt might besiege [the Strip] or make things harder on Gaza,” he was quoted as saying.

Al-Monitor learned about a schedule of daily events, which was set forth by the Hamas government in Gaza, including peaceful sit-ins and protests in front of the closed Rafah crossing. This is not to mention demonstrations in front of the UN offices in Gaza to protest against what Hamas calls the economic pressure and “dire living conditions” in the Gaza Strip as a result of closing the crossing and the demolition of tunnels.

Yet, the fear is that impulses may prevail over these demonstrations, leading to the use of provocative slogans, as well as the raising of pro-Brotherhood and anti-Egyptian army banners. This would make these actions counterproductive and further inflame the already tense relationship with the Egyptians.

Hamas’ intention to calm the situation does not seem to have been reciprocated by the Egyptian media, which have adopted what one Gaza official described to Al-Monitor as a stance meant to “demonize Palestinians” who are being held responsible for the security incidents occurring in Sinai.

Matters have also reached the point where an Egyptian court has reversed a decision issued by Morsi to grant Egyptian citizenship to 50,000 Palestinians from Gaza, despite the fact that the decision was taken with the consent of all security agencies and judicial authorities at the time.

Director-General of Gaza’s Border Crossings Administration Maher Abu Sabha indicated that a humanitarian crisis was unfolding as a result of tens of thousands of Palestinians being prevented from traveling. The Egyptians, he claimed to the Palestinian Al-Rai news service, use the difficult security situation in Sinai to justify its closure of the crossing or blame delays on problems with its computer network. This, in turn, explained Hamas’ constant concern since latest figures show that close to 6,000 Palestinians currently need to urgently travel for health, personal or business reasons.

Lastly, the most accurate characterization of the newly perceived Hamas policy toward Egypt was given to Al-Monitor by a prominent figure in the movement. “Hamas is trying to implement the old military rule of taking one step back in order to advance 10 steps forward, because it believes that Egypt is the lifeline through which it breathes, eats and drinks. This, then, necessitates that the movement find a way to restore its relationship [with Egypt] to its former state, which I hope it will succeed in doing.”