Hamas has leaked internal Fatah documents it says proves that its rival was trying to frame it in Egypt's political crisis. 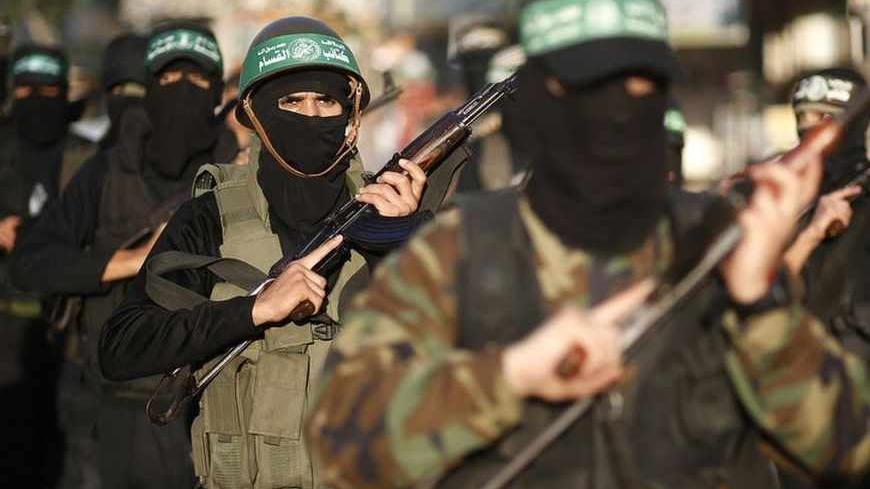 Over the past few weeks, the two largest Palestinian factions, Hamas and Fatah, have exchanged accusations over the Egyptian crisis. Fatah is regarded as closer to the Egyptian army, while Hamas has ties with deposed Egyptian president Mohammed Morsi.

Fatah started by accusing Hamas of interfering in the situation in Egypt through television coverage, newspapers and news sites within Hamas’ “media apparatus,” which, according to Fatah, is biased toward the Muslim Brotherhood. Hamas’ media outlets are also said to have broadcast the Muslim Brotherhood sit-ins and hosted Islamist figures, suggesting that the Palestinian group rejects the coup.

Hamas declared that Palestinian Authority (PA) President Mahmoud Abbas visited Egypt last week to accuse Hamas in front of Egyptian authorities of being involved in some of the bloody events that had taken place in Egyptian cities, including the killing of Egyptian soldiers in northern Sinai in August 2012 that horrifed Palestinians and Egyptians alike.

Hamas also accused Fatah of being involved in the Egyptian crisis not only through the media and politically, but also on the ground. It alleged that Fatah had plotted against the Muslim Brotherhood, fabricating news and also collecting evidence against Hamas.

These accusations peaked in the past few days, when Hamas revealed documents it had obtained from a Fatah security officer who had returned from abroad. His personal computer was confiscated, wherein large amounts of original documents and correspondence were found.

A senior security official in Gaza confirmed to Al-Monitor that the Fatah General Intelligence officer, Mohammed Abu Diya, had been returning from the United Arab Emirates when he was detained by Hamas authorities. He will be brought to trial, according to the source, who asserted that Abu Diya had been meeting with “fugitives” affiliated with Fatah when he returned to Gaza to receive large financial transfers to be used for spreading chaos in Gaza. These claims have not been substantiated.

The leaked documents refer to the so-called information security cell in the Palestinian Embassy in Cairo. According to the Hamas official, the cell’s mission is to “demonize” Hamas in the eyes of Egyptians and to generate criminal accusations and reports against its members.

After having gone through these documents, I found the names of many security-affiliated Fatah members, including Tayeb Abdel Rahim, secretary-general of the presidency; Jamal Muheisen, a member the Fatah Central Committee; Majed Faraj, director of General Intelligence; Barakat al-Farra, the PA’s ambassador to Egypt; Jihad al Harazin, media official in the embassy; and Bashir Abu Hatab, the security attaché at the embassy.

Several different tasks were revealed to have been assigned to a committee. The first was to generate false news items, as indicated in a document dated July 12, 2013, and sent by the chief of intelligence for Gaza province, Col. Shaban al-Gharbaoui. The document orders the committee "to accuse the [Izz ad-Din] al-Qassam Brigades, Hamas’s military wing, of protecting the Muslim Brotherhood’s Supreme Guide, Dr. Mohammed Badie, during his first [post-coup] appearance, which happened on the stage in Rabia al-Adawiyya Square.”

Another of the committee’s tasks was to furnish political analysts with fabricated news items, but portrayed as self-evident, and to have them broadcast on Egyptian TV. A document dated July 17, 2013, sent from Lt. Col. Ahmed Durmush of the Preventive Security Service to Bashir Abu Hatab, the security attaché in Cairo, instructs him “to accuse Hamas of kidnapping and killing the Egyptian soldiers in the Sinai and [to report] that [Hamas] is planning to open a military front in order to drag the Egyptian army into an escalation with Israel.”

A document dated July 2, 2013, sent from Brig. Gen. Jamal Hassouna to Maj. Gen. Majed Faraj, head of General Intelligence, talks about needing to “write reports about meetings — grouping Hamas, the Muslim Brotherhood and the Salafists in the Gaza Strip — [that happened during] a secret visit [to Gaza] by the Muslim Brotherhood’s deputy leader Khairat al-Shater and former Egyptian presidential candidate Hazem Abu Ismail.”

Moussa Abu Marzouk, deputy head of Hamas’ political bureau, denied these accusations in the Palestinian media, stressing that Palestinians are far removed from interfering in Egyptian affairs. He also denied that al-Qassam and Hamas members were at Rabia al-Adawiyya in Cairo or in other Egyptian cities.

The committee’s third and most dangerous task was to execute bombings and killings in Egypt and blame them on Hamas. This was stated in a letter dated July 3, 2013, written by Col. Sami Nisman, the assistant to the chief of General Intelligence in the Gaza Strip, and addressed to Abu Hatab, the security attaché in Cairo. It read, "One of our officers has obtained four bombs with 'Qassam Brigades' printed on them from a relative of his working with the brigades in Gaza. He then brought them to Egypt through the tunnels. This officer suggests that we take advantage of these bombs to establish proof of Hamas' ties to the events at the Republican Guard club, Mansoura and Maspero. This suggestion was well received, and work is under way to set up an appropriate mechanism to implement it."

For its part and as expected, Fatah made haste to deny the authenticity of these documents and accused Hamas of falsification. A prominent Fatah official told Al-Monitor about his concerns that this could be a prelude to a series of arrests and prosecutions of Fatah members.

The spokesman for security agencies in the West Bank, Adnan al-Damiri, went to greater lengths in claiming in Fatah media that Hamas is going through a state of hysteria due to its regional crisis and is making up new crises on the Palestinian scene to exacerbate tensions internally.

Informed sources in Gaza told Al-Monitor that the security agencies have additional evidence that has yet to be revealed, including filmed confessions of involved Fatah members, which will put an end to the movement's denial.

That is why Hamas called for setting up an investigative committee including security and legal experts from both factions to prove the authenticity of the documents, a move for which Fatah announced its approval. Hamas circles saw this announcement as a positive change and asked Abbas to dissolve the Security and Media Committee, said to be responsible for the campaign, in an attempt to restore normalcy to internal Palestinian relations.

The future of reconciliation

What is odd about the exchange of accusations is that Hamas did not intensify its stand against Fatah by accusing the movement in its entirety. The accusation did not point to Abbas himself, but rather Hamas called on him to investigate the claims and sent full copies of the documents to him.

This was not a spontaneous action on the part of Hamas, a source close to the decision-makers in the movement told Al-Monitor. Hamas aims to maintain ties with Fatah, avoiding cutting off the relationship, given the negative effects that would be cast on the reconciliation.

The source added, “The reconciliation seems currently, more than ever, out of reach in light of two developments on the political scene. First, Egypt is seemingly changing its stance toward becoming anti-Hamas, given that the latter is seen as one of the Muslim Brotherhood’s wings after the latest accusations. Second, political negotiations between the PA and Israel were launched, which means drifting away from Hamas. History has shown the Palestinians that negotiations and reconciliation are two parallel lines, never intersecting.”

The shift in the Egyptian situation is what saddens the Palestinians most. Egypt, once the host of discussions on reconciliation between Fatah and Hamas, with both parties' agreement, has been transformed overnight into a subject of conflict between the Palestinians. Therefore, instead of facilitating dialogue on reconciliation between Fatah and Hamas, Egypt has become itself a point of contention, which means that they are now farther than than ever from achieving reconciliation.

Adnan Abu Amer is dean of the Faculty of Arts and head of the Press and Information Section as well as a lecturer in the history of the Palestinian issue, national security, political science and Islamic civilization at Al Ummah University Open Education. He holds a doctorate in political history from the Demashq University. He has published a number of books on issues related to the contemporary history of the Palestinian cause and the Arab-Israeli conflict. On twitter @adnanabuamer1