After initially staying silent on Egypt, Hamas has decided to respond to media accusations against it by launching a campaign of its own. 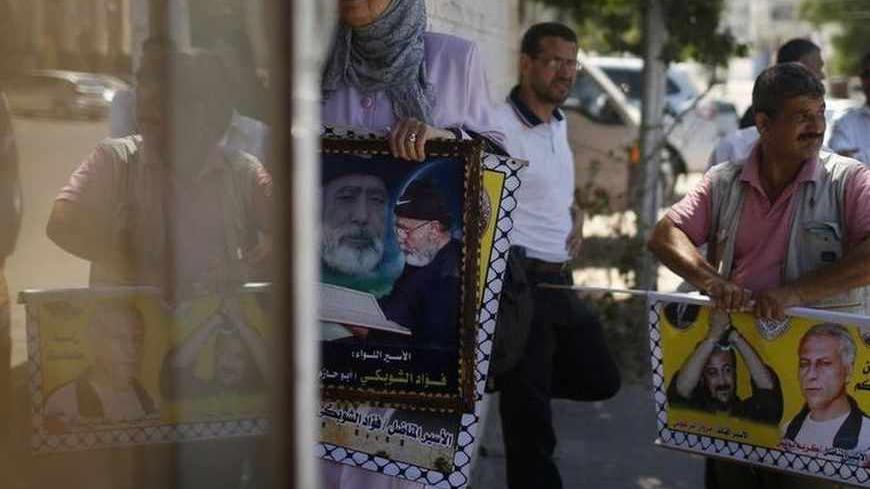 Palestinians hold up posters of prisoners during a protest calling for the release of Palestinian prisoners from Israeli jails near the Red Cross in Gaza City, July 29, 2013. On July 28, 2013, Israel's cabinet approved the release of 104 Arab prisoners to help restart peace talks with the Palestinians and end nearly three years of diplomatic stagnation. Poster (R) reads, "We will not forget you." - REUTERS/Mohammed Salem

The Egyptian crisis is having negative political and economic effects on Palestinians in the Gaza Strip. After initially maintaining silence, Hamas last week moved to close the Gaza offices of Ma'an News Agency and Al Arabiya.

Hamas accused some Palestinian media outlets of behaving like some Egyptian media outlets and “fabricating” stories about Hamas’ relationship with the Muslim Brotherhood in Egypt and its interference in Egyptian affairs, both politically and on the ground.

On the evening of Thursday [July 25] the police came to the headquarters of Al Arabiya and Ma'an news agencies in Gaza City, informed them of the attorney general’s order to close their offices, and ordered their workers to leave immediately. The directors of the two media offices told Al-Monitor that the police showed them the attorney general’s order, but refused to hand over copies

The government’s information office in Gaza explained the decision in an email that stated: “We have repeatedly warned the media offices that have been closed about the consequences of going too far in broadcasting and publishing false and fabricated news; in falsely portraying the Palestinian people and their resistance as interfering in other countries; and in disseminating hatred and incitement. [In] the past few weeks those media offices escalated this kind of behavior. We have taken all legal measures to stop this campaign, including the necessary legal action outlines in the Palestinian Press and Publications Law and the prosecution of these and other media outlets before the judiciary.”

Al-Monitor met with a Hamas official who said on condition of anonymity, “The Egyptian media campaign against Hamas and the Gaza Strip must be confronted. So the movement’s political and media leadership has decided to counter all those who seek to spread news that affect the movement and its prestige in the Gaza Strip.”

Hamas’ media policy has been palpably confused and tense since Egyptian President Mohammed Morsi was ousted and the Egyptian media launched a campaign against the Palestinians accusing them of interfering in Egyptian affairs. Hamas reacted by defending itself and denying the Egyptian accusations through the movement’s daily email briefing to reporters, which was obtained by Al-Monitor.

The Hamas source warned that "the closure of the Al Arabiya and Ma'an news agencies was a message to the media." It also demonstrated that Hamas is "monitoring all published and broadcast media. The campaign may result in the arrest of Palestinian journalists and the closure of other media offices."

These events coincided with Hamas' launch of a media campaign against Fatah, accusing it of supplying Egyptian and Palestinian media with false documents and information to tarnish Hamas’ image by exploiting the problems witnessed by the Egyptian Muslim Brotherhood.

Hamas spokesman Salah Bardawil said in a statement published by Al-Resalah newspaper on Sunday [July 28]: “We have found a large amount of documents — hundreds — dealing with the news broadcast on Egyptian media that accused Hamas of being involved in the [Egyptian] republic’s events. We have identified the source of the news, how it was made and how it was sent to the Egyptian press.”

Bardawil accused Abbas and other Fatah leaders of leading the anti-Hamas campaign. Bardawil said, “The big surprise was that Abbas himself is at the head of the anti-Hamas smear campaign. Abbas is being assisted by the secretary-general of the presidency Tayeb Abdel Rahim and the head of the General Intelligence Service in the West Bank Majid Faraj. They have a cell in Cairo led by Jawad Harazin, and includes Bashir Abu Hatab, Ahmed Mansour Daghmash and Palestinian Authority ambassador Barakat al-Farra. They are being helped by journalists in the Gaza Strip and the West Bank.”

Gaza-based human rights activist Mustafa Ibrahim accused Hamas of suppressing freedom of expression in the Gaza Strip, saying, “Hamas complains day and night that its freedom is being suppressed, that it is a victim, and that it is being pursued everywhere. But here is Hamas suppressing others, and pursuing and closing media outlets by illegal means for political purposes. Hamas is violating the rights of others in a vengeful and retaliatory manner.”

In an article published on Sunday [July 26] Ibrahim said: “In the era of freedom on the Internet and in the Arab Spring, no one’s opinion can be suppressed. Accountability is accomplished by responding to the incitement, hatred, fabrications and lack of professionalism and press credibility by applying the law equally, and by taking the appropriate legal measures. Ethics is indivisible.”

Hamas fears that the media campaign against it will be exploited by some youth groups that will call on the Palestinians to rally against Hamas rule in the Gaza Strip, similar to what happened in Egypt. A Hamas source said that the movement will confront this turn of events by any means necessary, “including violence.”

Hamas is feeling the heat caused by these media campaigns, regardless of whether the news being reported is true or false. The return of Abbas to political negotiations could pull the rug from under Hamas’ feet, especially with the release of prisoners from Israeli jails. Hamas may be trying to divert attention by dragging its rival Fatah into the political mud.