Hamas has instructed its leadership to maintain a low profile on Egypt's unrest to avoid being dragged into the crisis. 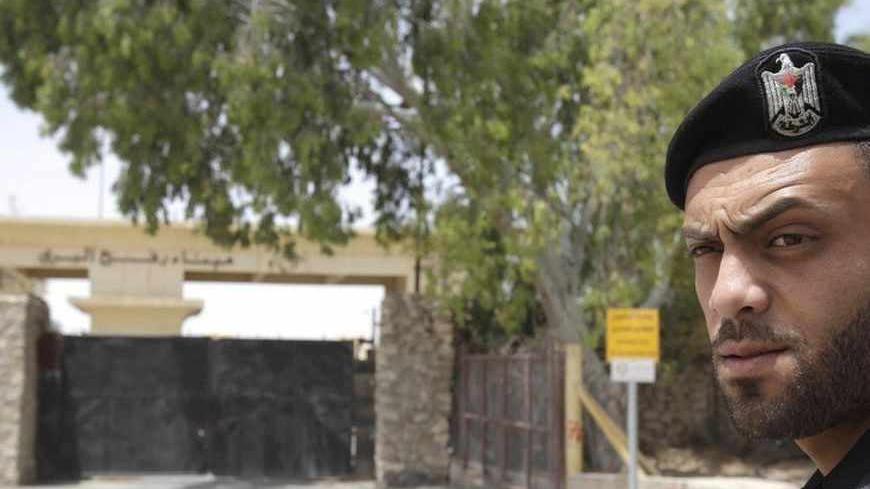 A member of Hamas security forces stands guard in front of the closed gate of the Rafah crossing with Egypt, in the southern Gaza Strip, May 17, 2013. - REUTERS/Ibraheem Abu Mustafa

Hamas’ concerns over Egypt are growing after the dismissal of their Islamist ally Mohammed Morsi. Indeed, the movement believed that the election of Morsi would bode well for Hamas. It celebrated the victory of the new Egyptian president and distributed sweets, believing that the arrival of the Muslim Brotherhood to power would increase Hamas’ strength in the Gaza Strip and abroad.

Hamas’s leadership and members, as well as the Palestinian public, have been keeping a close eye on the accelerating events in Egypt, as they have a great impact on the Palestinian cause. Nevertheless, the leaders of the Islamic movement and its affiliated media outlets have remained calm, waiting for the possible outcome of the Egyptian crisis.

According to an informed source that spoke to Al-Monitor on the condition of anonymity, Hamas has issued a clear statement to all its leadership and members not to talk about the details of what is happening in Egypt, limiting their statements to “express their sympathy and hope that Egypt might emerge peacefully from this current crisis, as the movement does not want to interfere in Arab domestic affairs, and so the Egyptian opposition does not use the movement’s stances and statements to their advantage.”

The source explained that Hamas has held consecutive meetings that include all of its affiliates to discuss the implications of events in Egypt and to put forward “different scenarios to deal with the situation in Egypt, whether the Muslim Brotherhood would manage to overcome the crisis or not.” The source refused to disclose the nature of these scenarios.

Ever since the outbreak of protests, Al-Monitor has been following Hamas’ audio and print media. The coverage of the Egyptian events has been cautious so as to abide by the movement's decision not to interfere in Egypt. Al-Monitor has also tried to contact some leaders and media spokesmen to have them comment on domestic events in Egypt. However, some remained silent and declined to comment, while others said, “We do not wish to interfere in Egyptian affairs and hope that Egypt can overcome this crisis.”

Egyptian opposition-affiliated media outlets have launched a scathing attack on the relationship between Hamas and the Muslim Brotherhood since Morsi came to power, accusing Hamas of manipulating Egyptian affairs, a claim that the Islamist movement has denied.

Incidentally, Hamas moved its headquarters from Syria to Egypt after the eruption of the Syrian revolution, which was not an option during the era of former President Hosni Mubarak.

The source added, “The new Egypt is seen as the most prominent Arab component in the history of the Islamic movement, mainly the Muslim Brotherhood, which regards Hamas as its Palestinian branch. Any potential fall of this system would reflect negatively on the Arab and Islamic world as a whole and not Palestine alone.”

Opponents of Hamas in the Gaza Strip have been supporting Egyptian protesters, who demanded the removal of Morsi, hoping that this would pave the way for Hamas’ collapse. Meanwhile, Hamas advocates have condemned the Egyptian protests via social networking sites.

The opinion writers opposing the rule of Hamas took strong stances toward the Egyptian crisis. Mohannad Abdul Hamid, in a July 2 article in Al-Ayyam, wrote, “The rule of the Muslim Brotherhood has proved to be a failure in every sense and standard.”

In another article published in the same newspaper, author Rajab Abu Sariya wrote, “The rule of the Muslim Brotherhood has fallen, and the ball is in the ‘protesters’ court, who are able to impose their democratic and popular conditions. Moderate Islamist parties can be partners in the next government, but the Muslim Brotherhood must be dissolved.”

Hamas-affiliated writers, on the other hand, took a defensive stance. In a June 27 article in Al-Resalah newspaper, Moomen Bsayso said, “What is happening today in Egypt is catastrophic and devastating at all levels. [These actions are designed to] undermine reason in favor of temperance, initiate chaos in the face of the law and adopt exclusion and forced exile as alternatives to mutual understanding. They seek to dissipate the gains and achievements of the popular uprising that was launched by the blood of martyrs and the pains and suffering of the people during decades of injustice, oppression and tyranny.”

The Egyptian army has tightened restrictions on the border region between the Gaza Strip and Egypt, which is dotted with hundreds of tunnels, and Hamas has imposed strict security measures and tightened control over the transport of goods and smuggling operations. Thus, all smuggling and transport activities have stopped.

The construction and urbanization sector in Gaza has also been paralyzed as building materials are no longer smuggled into the besieged Strip. This is not to mention the sharp decline in the movement of internal transportation as a result of cutting off the fuel supply, which used to be smuggled from Egypt.

The Rafah crossing linking Gaza and Egypt has, however, remained open during these events, contrary to expectations. However, passenger traffic has declined as Egyptian authorities have reduced the number of Palestinians crossing the border to just a few hundred each day.

Speaking to Al-Monitor, Maher Abu Sabha, director general of the General Department of Palestinian Crossings in Gaza, said, “The passenger traffic has declined significantly. No more than 400 passengers are allowed to cross every day under the agreement between both sides. Since the eruption of the protests, the Egyptian side has limited the number of passengers to fewer than 200 people, while before 1,500 people used to pass through the crossings.”

As the crisis in Egypt continues, the same Hamas source expressed his fears to Al-Monitor that “the Egyptian people would slide into civil war or sectarian conflict, as is the case in Syria, Lebanon and Iraq.” The source said, “Should this happen, the centrality of the Palestinian cause in the Arab world would be undermined and we would enter into an endless cycle, while Israel would emerge as the sole beneficiary.”