Hamas Prime Minister Ismail Haniyeh has called on Egypt to "re-evaluate" Camp David in the context of a comprehensive security plan for Sinai. 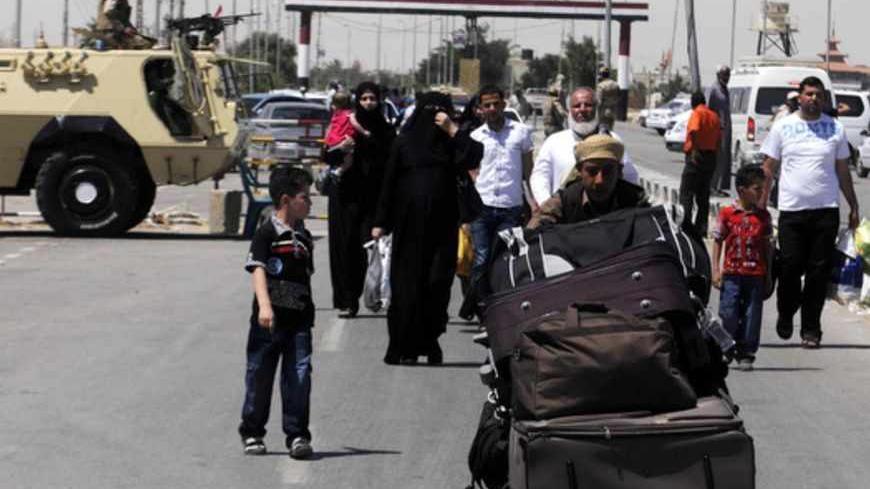 Palestinian travelers pass an Egyptian soldier standing guard on the Egyptian side of the Rafah border, to cross over to Gaza at Rafah city, some 350 km (217 miles) northeast of Cairo, May 22, 2013. - REUTERS

The Rafah crossing has become a main lifeline connecting Gaza residents with Egypt and the outside world. Gaza's dependence on Rafah increased after Israel destroyed the only airport in Gaza in 2002 during the second intifada and imposed stringent restrictions on the movement of individuals through the Erez crossing, confining its use to humanitarian cases and staff members of international organizations.

Hamas sees in the crossing a key to its legitimacy in the Gaza Strip. After Israel imposed its blockade, this prompted Hamas to exert pressure on the former Egyptian regime to reopen the Rafah crossing and facilitate movement through it, finally succeeding in doing so after the Israeli naval attack on the Turkish humanitarian flotilla in 2010.

Since the forceful takeover by Hamas of the Gaza Strip in 2007, the Rafah crossing was almost completely closed off following the departure of international observers stationed there as part of the so-called crossing agreement reached when Israel withdrew from Gaza in 2005.

After the ascension of the Muslim Brotherhood to power in Egypt following the January 25 revolution, the Palestinian inhabitants of the besieged Gaza Strip expected to see improvement in the movement of individuals between Gaza and Egypt, but no meaningful changes ever materialized and conditions there were never restored to what they were prior to Hamas’ takeover of the Strip.

According to Maher Abu Sabha, the director of the General Administration for Crossings and Borders in Hamas’ Interior Ministry, the Rafah crossing is open throughout the week with an average of 800 individuals passing daily toward Egypt, and a similar number allowed to return in the opposite direction to Gaza.

The unstable security situation in the Sinai Peninsula adjacent to Gaza directly affects the ease or difficulty by which travelers can pass through the crossing. This was evident this month when seven Egyptian soldiers were abducted by Salafists in the Sinai Peninsula, causing the Rafah crossing to remain closed for five days, only reopening after their release.

During the past year, the crossing was also closed for 20 days when Gaza-based Salafists were accused of participating in a terrorist attack on an Egyptian army outpost that led to the death of 16 soldiers during the month of Ramadan. This accusation has been denied by all Palestinian factions.

Furthermore, Egyptian security agencies and some opposition parties accuse Hamas of tampering with Sinai’s security and contributing to the spread of instability there, which increased with the Egyptian revolution and the toppling of former president Hosni Mubarak’s regime. Hamas, on the other hand, is diligently striving to keep this out of the Egyptian media, while accusing media outlets of incitement against it without due cause.

Gaza Prime Minister Ismail Haniyeh, who is also the deputy head of Hamas’ political bureau, called on Egypt to re-evaluate the Camp David Accords, build “a comprehensive strategy concerning Sinai” and adopt a new policy for the Rafah land crossing.

In a speech he gave last Friday, May 24, in Gaza, Haniyeh called on Egypt to “re-evaluate but not necessarily withdraw from the Camp David Accords, especially with regard to the accords’ security articles, while fast-tracking the discussion of urgent matters by Egyptian policymakers.”

Any Palestinian who wishes to cross the border into Egypt has to complete a number of procedures before he can begin his travel. This begins with registering with the Interior Ministry in Gaza, where his name is placed on a list of passengers and the number of the bus he will take is specified. Then, he must go to the outdoor waiting area at the Rafah crossing early in the morning on the day he wants to travel. Here the passengers are assigned to different buses. Next he must go to the passengers hall, where they stamp his passport after he pays the fees. He then returns to the bus once again and must wait for the bus driver to receive permission to go to the Egyptian gate of the crossing. After crossing to the Egyptian side, the passenger must go through a security check, and then enters the arrivals hall to wait for permission to enter Egyptian territory.

He told Al-Monitor over the phone, "I traveled today with my wife and her mother, so that my wife can undergo surgery in Nasser Hospital, after we received a transfer from the Palestinian Ministry of Health. We began preparing for the trip nearly a month ago."

In an interview with Al-Monitor, Abu Sabha asked the Egyptians to fully and permanently open the Rafah crossing for around-the-clock business travel and to remove restrictions imposed on travelers of a certain age.

It should be noted that Egyptian authorities have imposed restrictions on the movement of Palestinian travelers passing through the crossing, particularly men aged between 18 and 40, who are required to obtain advanced security clearances from Egyptian security agencies. Egypt also limits travel to or through Egyptian territories to those requiring medical treatment or intending to travel abroad, contingent upon them possessing entry visas to the country of their destination. The General Administration for Crossings and Borders has recorded the departure of approximately 210,000 Palestinian travelers through the Rafah crossing during 2012, compared with over 130,000 in 2011 and roughly 86,000 in 2010.

Rafah authorities did not allow 26,000 would-be travelers to cross in 2012, as compared with 8,000  in 2011. In 2010, Egyptian authorities turned back 12,000 travelers, some because they were barred from entering Egyptian territories for security reasons, and others, mostly young men, because they did not possess the documents needed to cross.

Furthermore, spread across the Egyptian-Palestinian border are thousands of tunnels used to smuggle foodstuffs, livestock, automobiles, fuel and construction materials as well as individuals barred by Egyptian authorities from crossing through Rafah.

In his speech, Haniyeh commented on the abduction of the Egyptian soldiers in Sinai by saying, “The developments were followed in keeping with our responsibilities as neighbors and brothers, and our government understands Egypt’s security concerns.”

He praised post-revolutionary Egypt and said, “Many positive aspects have characterized Egypt since the revolution. Numerous achievements have been made concerning the Palestinian cause and Gaza, among them the prisoner-swap agreement as well as developments pertaining to the opening of the Rafah crossing. Egypt also made its position clear regarding the latest war waged against the Palestinian people in Gaza, and facilitated the development and construction of Gaza.”

From time to time, the Egyptian army conducts campaigns against the tunnels spread along the border, and even destroys some of them, which negatively impacts the flow of goods into Gaza and leads to a rise in the price of smuggled construction materials and fuel.

Every security incident taking place in the Sinai desert, where Salafist jihadist elements roam, is met by the Egyptian media with direct accusations alleging Hamas’ involvement. As a result, Haniyeh has called for the adoption of a comprehensive Sinai strategy that would govern the relationship with Egypt in this regard.