The backlash from the brief arrest of high-profile columnist Ibrahim Abrash continues, with Hamas targeted over freedom of speech. 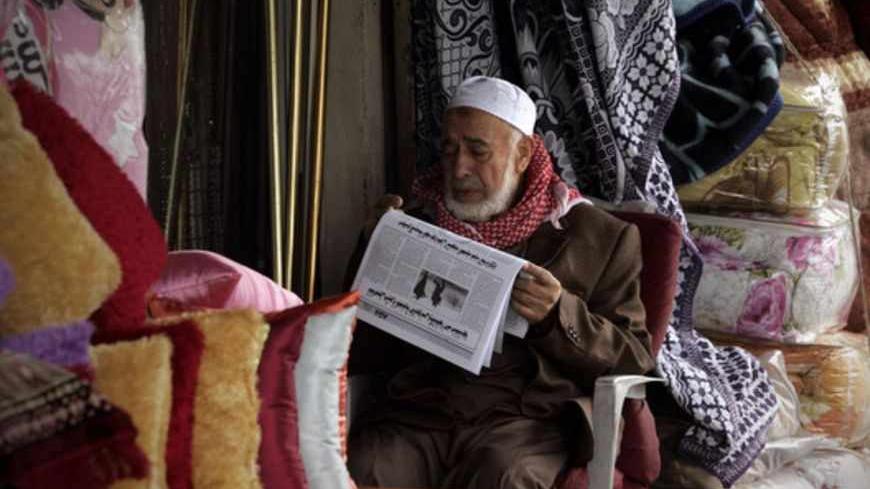 The summons and arrest of Palestinian political writer Ibrahim Abrash by the internal security apparatus of the Hamas government speaks volumes about the state of civil liberties in the Gaza Strip and the extent to which one can criticize Hamas, its policies and its alliances. While its opponents believe that Hamas is intolerant of criticism, supporters argue that Abrash had in fact caused incitement and used terms that went beyond constructive criticism.

Abrash, a political science professor at al-Azhar University – Gaza, accused Hamas’ security apparatus of abusing his rights without legal cause when it summoned him to appear for questioning after he published an article, which appeared on various websites, about the upcoming visit to Gaza by Sheikh Yusuf al-Qaradawi, whom he characterized as the “mufti of sedition,” angering Hamas.

In the May 7 article, “Gaza Affords Forgiveness to No One,” Abrash stated, “These days, we hear talk, see banners being raised and invitations issued by Hamas and its government in honor of al-Qaradawi, the Qatari sultan’s mufti of sedition who, through his pulpit, endorses America’s policies of chaotic destruction, and whose fatwas in all causes and countries have only led to strife and civil wars. It would seem that al-Qaradawi, exposed and rejected by most Arab and Muslim countries as a man deserving to be stoned to death, now wants to clean his slate and be forgiven through this visit to the Gaza Strip.”

In an interview with Al-Monitor, Abrash recounted being summoned for questioning on May 23. He spoke of being forced to wait for four hours in a closed room before he was questioned for two more hours in a manner he described as “degrading” by a duo of security agency officers who demanded that he apologize by writing another article, in which he should describe al-Qaradawi as “a holy figure.” They also demanded that he return for further questioning on Sunday, May 26.

In the evening after his first interrogation, Abrash — who had served as minister of culture in former prime minister Salam Fayyad’s first cabinet only to resign a few months into his term — published an article on the web in which he announced, “I decided not to go back. If the Internal Security Agency needs me, it will have to arrest me, which it is certainly capable of doing.” It thus transpired that two security officers showed up Sunday afternoon and escorted Abrash to the security agency’s headquarters, where he was questioned for an hour before being released.

Different civil institutions and Palestinian factions have condemned Abrash’s arrest, with many writers publishing articles about the incident, which severely embarrassed Hamas’ Gaza government and drove it to end its investigation before receiving the apology it demanded.

Islam Shahwan, spokesperson for Hamas’ Interior Ministry, accused Abrash of “incitement and lies” and proclaimed that his arrest was lawful and had resulted from his refusal to appear before “official state authorities.”

In a press statement on the ministry’s website, Shahwan said, “The Interior [Ministry]’s goal was to question him about the lies that he published, and he cooperated with security agencies.”

Since Hamas’ takeover of the Gaza Strip in the summer of 2007, freedom of opinion and expression have suffered numerous transgressions, which have been documented by human rights organizations. Furthermore, a number of journalists have been summoned for questioning and subsequently arrested or barred from travel. Earlier this month, a demonstration was forcibly dispersed during which journalists were targeted, despite Hamas’ denial of these violations, which it considers “individual incidents” and not part of any government policy.

Speaking to Al-Monitor, Imad El Efranji, a journalist and president of the Palestinian Media Forum, characterized the state of freedom in the Gaza Strip as “good,” particularly in light of the occupation and the political divide that exists between the West Bank and Gaza. He alluded to the existence of “confusion among some opinion writers about the meaning of freedom of expression and opinion.” He noted, “There is a difference between incitement, defamation and criticism within acceptable norms.”

El Efranji said that some violations of freedom of expression and opinion have occurred as a result of “Palestinian police officers misunderstanding the role played by journalists and civil society, and journalists not understanding the role of the police, in addition to the lack of any clear laws that can be invoked. The situation is compounded by the existing divisions [between Palestinian factions], and the investigations conducted into some people for political reasons, especially in the West Bank.”

Journalist Fathi Sabbah, president of the Palestinian Institute for Communication and Development, told Al-Monitor, “The margin afforded to freedom of opinion is insufficient. It is unstable and fluctuating. It is large during periods of calm, but violations increase in times of tension.”

Sabbah also spoke of “taboos” within the freedoms afforded to opinion, expression and the press. “There are red lines and taboos drawn by Hamas and the Gaza government encompassing many issues, such as criticism of the resistance movement against the occupation, sexual matters, religion and politics.”

He explained that Hamas considers “any criticism leveled against it by authors and journalists as being criticism aimed at Islam as a religion, and therefore criticizing al-Qaradawi was an insult to Islam, even though he is but a cleric and does not represent the religion as a whole.”