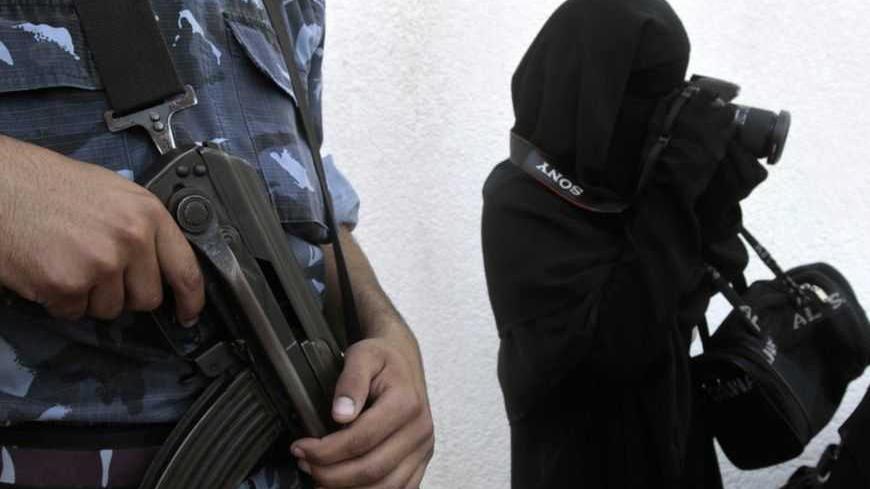 A member of the Hamas security force stands guard as a woman takes pictures during a demonstration organized by the Hamas movement in Gaza City, Sept. 28, 2009. - REUTERS/Mohammed Salem

Hamas has begun drafting a new law that it said would “regulate” the media in the Gaza Strip, which journalists and rights activists have criticized as restricting media freedom.

To discuss the draft with Gaza journalists, the Hamas-run government press office in Gaza last week held a forum to which more than 70 local journalists were invited. At least 60 boycotted.

“We are sorry not to see journalists here today. We invited them because we want them to share in the issuing of the law with their hands,” said Kamal al-Hadidi, head of the media production department at the Press Office, at the opening of the session.

One of the very few journalists attending, Dunia al-Amal Ismail, strongly opposed the new law for the lack of coordination with journalists, its inaccurate terms and the bad style of writing in its text.

“You are considering consulting with jurists as a last step, which doesn’t make sense: They should be the first [to be consulted], then we are talking about issuing a new law,” Amal Ismail said, addressing Gaza’s government media officials.

The 17-page, detailed draft included regulations for both print and broadcast media, and insisted on the right of freedom of expression in its first chapter but continued with many restrictions in later pages.

“Mass media are banned to publish or broadcast sacrilegious materials, secretive information about the security apparatus, inciting reports that aim to create state of chaos and all what might harm the state’s icons,” one of the most controversial articles read.

The new law also banned bringing in any publications that don’t meet these restrictions.

The suggested law annuls the 1995 Palestinian publications law, which was ratified by the Palestinian Legislative Council (PLC) at the time.

Critics say that with the Palestinian split, the PLC is not functioning as one body and passing the new law, if happened, would be done solely by Hamas lawmakers in Gaza, in isolation from the other parliamentary bloc in the West Bank.

“All the PLC sessions after the national split are illegal and all the decisions it issues are non-binding,” said Fathi Sabbah, a journalist and the head of the Palestinian Institute for Communication and Development.

Sabbah, who boycotted the meeting, said that the draft was disappointing as it’s even worse than the 1995 law, which was always opposed by Palestinian journalists for restricting basic freedoms of expression.

“There are some articles that were literally copied from the 1995 law, such as banning [publications] harming the leadership and security issues,” Sabbah added.

For example, the draft referred to the national currency, while in fact the Palestinians have no currency and still use the New Israeli Shekel. In another example, the law prohibits criticizing what it calls “state icons” without elaborating.

Gaza-based journalist Emad Drimly, who was invited to the meeting but also boycotted, said that this law is a new step towards minimizing the freedom of expression space.

“Journalists and media representatives should have been part of forming this law, which didn’t happen. This is why I preferred not to be a part of its discussion,” Drimly added.

On his Facebook account, the head of Gaza’s Press Office, Ihab Ghussein, wrote that the draft comes as part of his plan for 2013 to rearrange the media situation in Gaza and prepare a modern law that matches the needs of journalists. “This is not a final law and there are many discussions to take place until it will be approved,” the post read.

Ghussein also opposed the opinion that claims that PLC cannot legislate amidst a continued national split, arguing that journalists have the right to replace the 1995 law: “The 1995 law has become outdated and is no longer in tune with current times, and the Fourth Estate should have a law that it can rely on.”

The new law would mark the latest Hamas move to curb media in the Gaza Strip, following a ban on Gaza journalists from working with Israeli media in December 2012, and the arrests of journalists in February.

Hamas continues to deny accusations, however, that it is restricting media freedoms in the Gaza Strip.

Abeer Ayyoub graduated from the Islamic University of Gaza with a  BA in English literature. She is a former human rights researcher turned journalist whose work has appeared in Al Masry Al-Youm, The Daily Mirror and Haaretz. Follow her on Twitter @Abeerayyoub.