The Hamas-run Ministry of Interior has recently placed new restrictions on those traveling through the Erez crossing, further limiting the movement of Gaza's residents, writes Abeer Ayyoub. 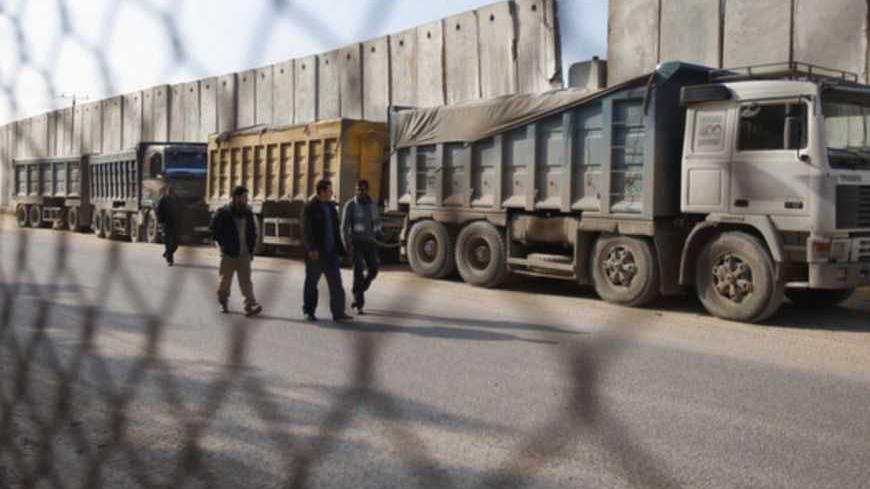 Palestinians walk past trucks loaded with gravel at the Kerem Shalom crossing between Israel and the southern Gaza Strip Dec. 30, 2012. - REUTERS/Ibraheem Abu Mustafa

On Monday, March 18, just after the Hamas-run Ministry of Interior placed new restrictions on those traveling through the Erez crossing between Gaza and Israel, freelance journalist and activist Majed Abu Salama was banned from leaving the Strip through this crossing. Abu Salama was going to Ramallah to attend a children's film festival that he had been invited to.

Majed was one of four filmmakers who were invited by a German organization to attend the event. Except for him, all received their travel permits from Hamas. Majed was given no justification for the refusal.

“When I went to the Ministry of Interior, they told me that the internal security services had refused to give me security clearance,” Majed said.

The Ministry of Interior decided earlier this month that no Gaza residents will be allowed to pass through the Erez crossing without a permit from the ministry itself.

But Gaza's Deputy Interior Minister Kamel Abu Madi said that his government is not planning to place any restrictions on people's movement, it’s just a matter of organizing the border's work.

“We are not planning to ban anyone from traveling; we just need to reform the administrative body that operates Gaza's borders,” Abu Madi noted.

Abu Madi said that there will be some exceptional cases where the government will request that some people travel through Rafah instead of Erez, for security reasons.

As Gaza doesn’t have an airport, Palestinians from Gaza usually travel through the Cairo airport after crossing the border between Gaza and Egypt at Rafah.

In a few rare cases, and when travelers can get invitations from embassies, they can travel through Jordanian airports. This is after crossing the Allenby Bridge between the West Bank and Jordan and after Israel grants them permits to travel to the West Bank through the Erez crossing.

The head of the Palestinian Independent Commission for Human Rights, Jamil Serhan, described the decision as a huge violation of Palestinian law, which grants people freedom of movement without the need for permits from any authority.

“This is an additional limitation Hamas is adding to the limitations Israel is already imposing on the movement of Palestinians in Gaza,” said Sarhan.

Commenting on the ministry's claim that this measure was "organizing" rather than "controlling," Sarhan said that this is illegal, as there is no legal action called “organizing movement.”

“Organizational procedures are not supposed to contradict the law, which is what is happening here,” Sarhan continued.

Abu Madi said that just as they are allowing people to cross freely through Rafah with pre-registration, they will apply the same system at the Erez crossing.

A similar incident took place earlier this month when Hamas security staff at the Rafah border banned another journalist from Gaza, Sami Abu Salem, from leaving Gaza through the Rafah crossing for no clear reason.

Rafah security officials told Sami that he should obtain a permit from the Gaza Media Office so that he can travel, but when he went to the media office he was told that he didn't need any permit.

“When I went to Rafah again and told them what the Media Office had told me, they threatened to confiscate my passport if I returned without a permit,” Sami said.

Majed was later refused by the Israelis as well, as he had not received security clearance.

“I was more shocked with the Palestinian refusal. I understand when Israel bans me from moving within my country, but I don’t understand it when my own government does this,” Majed exclaimed.

In a press statement released earlier this month regarding Sami's case, the Palestinian Center for Human Rights (PCHR) voiced its concerns about an illegal decision by the Internal Security Services to ban journalists from traveling.

“PCHR calls upon the attorney general to put an end to the use of such measures and ensure respect for the right to freedom of movement, which is guaranteed under the Palestinian Basic Law, as well under relevant international human rights standards,” the statement read.

Answering the question of whether youth from Gaza will be allowed to participate in Israeli activities inside Israel, Abu Madi said that his government is not planning to ban youth from attending such meetings.

“We will only ask minors for written consent signed by their parents. This is the maximum we can do; we are not going to impose any bans,” Abu Madi confirmed.

Except for patients in critical condition, businessmen over the age of 35 and some employees of international organizations, Israel is totally denying Palestinians the right to travel between Gaza and the West Bank.

Just like Sami, who was allowed to travel a couple of days later, Majed eventually received a call from the Ministry of Interior telling him that he could attend the festival. However, it was too late, as the festival already started.

“No matter how angry I am, being banned by Israel and Hamas proves to me that I’m right. Israel is my enemy, and my government is not okay with anyone opposing it," he said.

Abeer Ayyoub graduated from the Islamic University of Gaza with a  BA in English literature. She is a former human rights researcher turned journalist whose work has appeared in Al Masry Al-Youm, The Daily Mirror and Haaretz. Follow her on Twitter @Abeerayyoub.