Hamas' ban on travel from Gaza to the West Bank for two human rights workers shows Israel isn't the only one restricting Palestinians' movement. 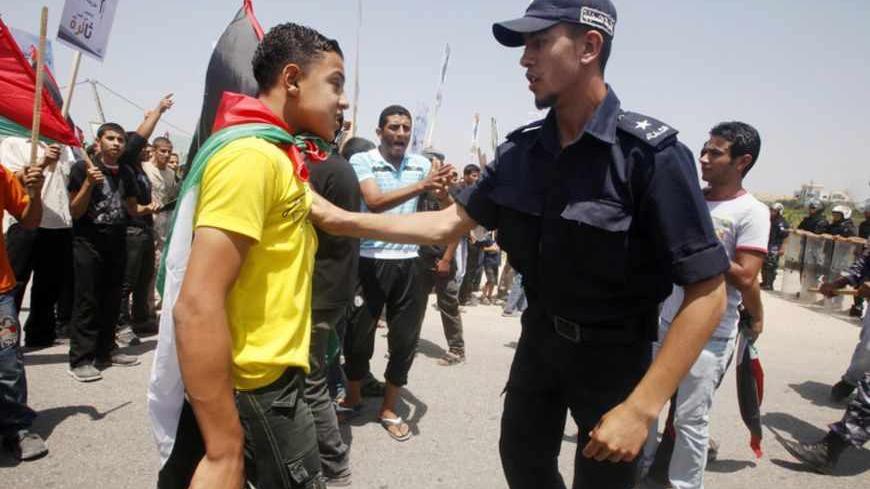 A Hamas policeman pushes back a Palestinian protester during a demonstration near the Erez border crossing between Israel and the northern Gaza Strip, June 5, 2011, the 44th anniversary of the start of the 1967 Middle East war. - REUTERS/Suhaib Salem

The lack of the freedom of movement is possibly the most manifest feature of the Israeli-imposed blockade in the Gaza Strip. The restrictions on the Palestinians freedom of movement are multi-faceted. For instance, as Israel continues to impose its hermetic blockade on Gaza, Palestinian fishermen are one such category of the civilian people in Gaza whose movement is extremely limited by the Israeli gunboats delineating the limited sea zone available to them. Moreover, Palestinian farmers and residents in the border area near the separation fence with Israel known as the Green Line is another such group.

Most recently, on Sunday, May 12, members of the Hamas government's Internal Security services stationed at the Erez crossing have prevented two Palestinian human rights workers from travel to the West Bank. The two attorneys, Eyad al-Alami and Mohammed Bseiso, who work with the Palestinian Center for Human Rights (PCHR) in Gaza were leaving for the West Bank to follow up on several legal cases which included, among other things, victims of Israeli attacks, Palestinian prisoners in Israeli jails and referral of Palestinian patients to hospitals outside the Gaza Strip.

In a news release published on its website, PCHR described the incident: "At approximately 11:00 on Sunday, May 12, 2013, Eyad al-Alami and Mohammed Bseiso arrived at the checkpoint of the Ministry of Interior near Beit Hanoun crossing, in the northern Gaza Strip, and handed their ID cards to an officer in order to complete the procedures of traveling to the West Bank. … The aforementioned officer asked the PCHR’s staff members to wait. After approximately half an hour, he told them that they were prevented from traveling and that they had to refer to the Ministry of Interior in Gaza for obtaining a travel permit."

In another incident, on March 22, Hamas Internal Security banned Fatah official Amal Hammad, who was traveling to Ramallah to attend a Fatah central committee meeting, from traveling via the Israeli checkpoint.

Al Mezan Center for Human Rights reported at the time of the incident: "At approximately 8:30 a.m. on Friday, March 22, 2013, the [Internal Security] Apparatus prevented Amal Hamad, a member of Fatah Central Committee, from traveling to Ramallah to attend the Fatah Central Committee meeting on in same day in Ramallah. Hamad arrived at Erez crossing accompanied by Dr. Zakaria Al-Agha, Hisham Abdel Razeq, and Dr. Faisal Abu Shahla, who are members of Fatah Leadership Committee in the Gaza Strip; all were attending the same meeting. The Apparatus allowed all of the delegation members to cross Erez terminal except Hamad. Hamad, who was kept waiting for one hour and a half after the rest of the delegation was allowed to pass, was informed on the same day, at around 10 a.m., that she would not be allowed to travel due to 'political reasons.' Hamad was previously prevented on several occasions by the [Internal Security] apparatus, for unknown reasons, from exiting Gaza."

In an interview with Al-Monitor, PCHR's lawyer Mohammed Bseiso explained the government's decision to prevent him and his colleague al-Alami from travel is both "illegal" and "unjustified" insofar as there was no judicial order to prevent them from traveling.

He added that this was particularly "disappointing," since they had been denied travel by the Israeli authorities several times before they finally managed to secure a travel permit to travel via Erez checkpoint.

Bseiso told Al-Monitor: "We had sent several applications to obtain a travel permit by Israeli authorities since October 2012. All our applications were rejected since as Israeli authorities said there was a travel ban on all lawyers. … When we finally secured the travel permit, we headed towards Erez crossing but were told that we're not allowed to travel without first obtaining another permit [from] the Ministry of Interior in Gaza."

Bsesso explained that such a measure, which requires obtaining a permit to travel, is illegal and unlawfully restricts the right to freedom of movement of all individuals in the Gaza Strip, which is guaranteed by the Palestinian Basic Law.

"When we were told that we need to obtain a permit," Bseiso added, "we explained to them that this is an illegal measure. … There is nothing in the Palestinian law that requires one to obtain a permit … to be able to travel. We went back to our offices, we filed a request to the High Court of Justice asking them to immediately allow us to travel and lift the permit procedure it has illegally imposed on everyone."

Bseiso told us that they have not yet received a response from the High Court of Justice.

Nonetheless, the Hamas government's restrictions on the freedom of movement are even more complicated than this, because many have been denied the travel permit when they applied for one at Gaza's Ministry of Interior.

In addition, in several cases, including the above-mentioned case of Amal Hamad, the imposition of a travel ban was rather vaguely justified, as pointed out above, "on political grounds."

Interviewed by Al-Monitor, Hamad said that the Hamas government's practices at both the Erez and Rafah crossings with regard to traveling outside the Gaza Strip only further entrench the barriers imposed by the Israeli occupation on the Palestinians' right to freedom of movement.

The Fatah central committee's member added that such policies will also deepen the division between Gaza and the West Bank because it is one of the government's policies directed against Fatah senior members and officials in Gaza.

Hamad stated: "This, if anything, proves that Hamas is neither serious nor genuine about ending the political split and achieving reconciliation with Fatah. In fact, such policies only do the occupation a service by entrenching its policies aimed at deepening the division between Gaza and the West Bank."

Finally, the Hamas government's ban on travel has targeted not only Fatah officials and human rights defenders but also journalists and young activists. The travel ban, in addition, has not been the government's policy for only those who seek travel via Erez crossing but has in fact taken place, rather more frequently, at the Rafah crossing with Egypt, too.