It looks like Israel is allowing more people to cross into the West Bank from Gaza through the Erez crossing, which has raised questions about the possibility of the Erez crossing replacing the Rafah crossing. 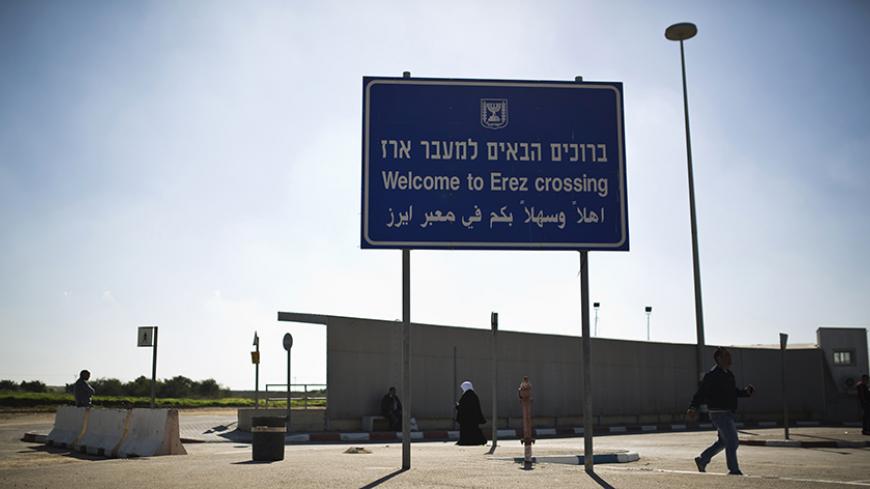 A sign at the Erez border crossing between Israel and northern Gaza Strip, Dec. 28, 2014. - REUTERS/Amir Cohen

GAZA CITY, Gaza Strip — #Badna_Nshouf_Doffeh (we_want_to_go_to_West_Bank) is a hashtag that has been trending on Facebook since June 3. Hundreds of Gaza Strip inhabitants used it to express their desire to visit the West Bank and its cities. Journalists and young activists posted pictures of themselves holding banners with the name of the campaign “Badna_Nshouf_Doffeh” and “Badna_Nshouf_Quds” (We want to see Jerusalem) accompanied by the hashtag.

The campaign began following Israel’s increasing use of permits for citizens from the Gaza Strip to allow them to visit the West Bank through the Erez crossing. This development stirred an important question about whether Israel’s Erez crossing in the north of Gaza might replace the Rafah border crossing — the border between Egypt and Gaza — in providing passage to the West Bank.

“In my whole 25 years, I have not been to the West Bank," said journalist Nidal al-Wahidi, who started the campaign "after noticing an increase in the number of travelers to the other side of the country.”

“We young people have the right to travel around and see our Palestinian cities,” he told Al-Monitor. "I noticed that most of those who cross over are either old, enjoy a certain favoritism or have international connections. I took this step to pressure the officials to allow the youths to travel [to the West Bank].”

Israel increased the restrictions at both the Erez and Rafah border crossings following the second intifada in 2000. In 2005, people ages 16 to 35 were not allowed to pass through the Rafah crossing.

Security was tightened on the Gaza Strip after the persistent closure of the Rafah border crossing starting in 2013 after Egypt President Mohammed Morsi was ousted. In 2014, it was opened for 125 days in total. In 2015, the crossing has been open in both directions for only five days so far.

To get a permit to enter the West Bank, a traveler must head to the Ministry of Civil Affairs in Gaza City, which is affiliated with the main administration in Ramallah, and submit any invitation or medical referral in addition to his or her identity card. Then, the person wanting to travel has to wait two weeks to a month to receive either an approval or rejection.

Al-Monitor met with several applicants at the ministry.

Adel Abu Awad, 57, submitted a travel application on behalf of his relative, Umm Mohamad Awad. “I came here to submit the travel request to the West Bank on her behalf because she is sick and needs treatment," he said. "She cannot come alone. They just told me the application was refused for the second time because she has a Jordanian passport, not a Palestinian one.”

Merchant Samir Abu Moamar, a 42-year-old independent trader, told Al-Monitor that trade activity at the Rafah border crossing has stopped after the border’s continued closure, thus prompting the submission of requests to travel through the Erez crossing. “My request was rejected several times over the course of two months, and I don’t know why,” he said.

A source from the Ministry of Civil Affairs told Al-Monitor that the rate of granting permits to visit the West Bank has now reached 70%, and the Gaza Strip residents’ requests have increased by 200% compared with the period of the previous Rafah crossing closure crisis and the war.

“This does not mean that the Erez crossing can replace the Rafah border crossing. Israel itself absolutely refuses this,” he told Al-Monitor.

Maher Abu Sabha, director of the border crossings in Gaza, told Al-Monitor, “There are around 15,500 people who have applied to travel through the Rafah crossing, but the number of people who actually need to travel [holders of foreign passports and regional residency, people seeking treatment and students] and are stuck in the Gaza Strip amounts to 90,000.”

Abu Sabha stated the reasons why the Erez crossing cannot substitute for the Rafah border crossing. “Israel is taking advantage of the needs of patients and travelers through Erez crossing to barter [granting them] permission to travel for cooperation with its security apparatus,” he said.

He noted that more than 90% of Gaza Strip inhabitants cannot travel through the Erez crossing for security and political reasons, including sympathizing with the resistance (in reference to Hamas). Those are subject to arrest just by passing through.

Deputy Minister for Civil Affairs Nasser al-Sarraj said that it's unlikely that the current crossing facilities into the West Bank for Gaza’s inhabitants through the Erez crossing would lead to its replacement with the Rafah crossing to fulfill similar purposes.

“This is unlikely for political considerations, mainly as Egypt is strategic for the Gaza Strip and is its door to the [rest of the] world,” he said. “The highest number of travelers through the Erez crossing reached 2,156 travelers per day.”

He said the increase in the number of travelers through this crossing occurred after the siege on the Gaza Strip was tightened. Applications for travel requests increased as a result of the tightening of the siege, as well.

Sarraj believes that Israel is not offering “free services” at the Erez crossing. Rather, the granting of travel requests through the Erez crossing is the outcome of negotiations and mediation efforts with Israel because of the deterioration of the humanitarian situation in the Gaza Strip.

Sarraj hopes that all Gaza Strip inhabitants would be able to travel through Israel’s Erez crossing and added, “But, there are complicated and slow procedures that forbid the young from traveling. There is also a background check that the Israeli security apparatus performs and that leads to the refusal of requests.”

He told Al-Monitor that there are other reasons that limit the provision of more facilities to Gaza Strip inhabitants, including the fact that 1,600 among those who had traveled to the West Bank over the last 22 months did not return to Gaza and remained there illegally.

Just by clicking on the hashtag “Badna_Nshouf_Doffeh,” one can read tales of passionately written and hopeful posts by the inhabitants of the Gaza Strip who long to visit their friends and relatives in the West Bank.

Journalist Dalia Meqdad wrote, “If a war takes place, and this is not unlikely, I would like to see the West Bank before I die.”

Sohair el-Kharaz posted, “I want to see the West Bank, and [I know] the West Bank would welcome our presence.”

Journalist Norhan al-Madhoun wrote, “Gaza is a big prison; I want to see the West Bank.”