Approximately 1,500 Palestinian students enrolled in foreign universities are stuck in Gaza, and are protesting for the reopening of the Rafah or Erez crossings. 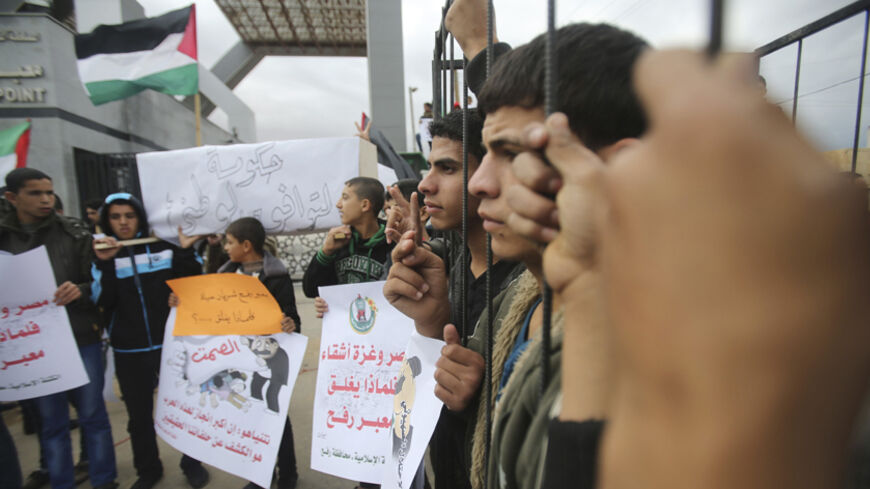 Palestinians stand behind the bars of a symbolic cage as they take part in a rally calling on Egyptian authorities to open the Rafah border crossing, in the southern Gaza Strip, Nov. 23, 2014. - REUTERS/Ibraheem Abu Mustafa

GAZA CITY, Gaza Strip — The continuing closure of the Rafah crossing threatens the ability of Palestinian students to travel abroad to complete their studies. This has led to a student movement in Gaza calling for the need to open the Rafah crossing, or an alternative such as allowing them to cross the Israeli-controlled Erez crossing.

Mohib Izz al-Din, a 22-year-old student, is one of the trapped students. He managed to obtain a scholarship to study medicine in Ukraine, but the closure of the Rafah crossing has prevented him from moving forward with his studies.

“We understand that the security situation in the Sinai is difficult, but the Egyptian authorities need to understand our right to education and to have access to our universities. We do not pose any threat to Egyptian sovereignty and security,” Izz al-Din told Al-Monitor.

“I only have seven days left before my visa to Ukraine expires. After that, the cost of the ticket, which I collected from my relatives, will go up in smoke. In addition, the new academic year has begun at university, and I am not able to catch up, which will significantly affect my educational achievements,” he said.

“Why are we prevented from traveling in order to study? Are there no international laws that guarantee our right to study anywhere we choose?!” Izz al-Din asked angrily.

Bassam Jadallah, also a student, said the closure of the Rafah crossing risks him forfeiting his degree, which prompted him to open a page on social networking sites to mobilize and call on trapped students to hold a sit-in.

In his interview with Al-Monitor, Jadallah said, “We have been hearing promises that we will be able to travel through the Rafah crossing since more than two months ago. Yet, we have realized that the Egyptian authorities do not give any importance to any Palestinian humanitarian needs, which prompted us to think of passing through the Erez crossing.”

According to the Gisha-Legal Center for Freedom of Movement, “Since March 2006, the adopted Israeli policy prevents the entry of Gaza’s residents through it, except in extreme and exceptional humanitarian cases.”

The center said, “Since July 2010, the number of Palestinians leaving Gaza through Erez has been around 3,000 citizens per month and these are mostly patients, who travel with companions in order to receive treatment in Israeli and West Bank hospitals and merchants. In comparison, more than 26,000 Palestinians entered Israel via Erez every day in the summer of 2000, before the outbreak of the intifada.”

For Jadallah, the closure of the Rafah crossing makes the trip of the students more difficult. “In case we were allowed to pass through the Erez crossing, we will have to pass through Israeli territory and the West Bank and follow new procedures to travel to Jordan. All of this is in order for us to reach an airport where we can travel to the various universities in the world,” he explained.

Jadallah protested along with dozens of trapped students on Nov. 20 in Gaza in front of the Civil Society Affairs department at the Ministry of Foreign Affairs, and demanded that Palestinian President Mahmoud Abbas intervene to enable them to travel through the Israeli crossing as soon as possible.

They also raised banners and slogans calling for UN Secretary-General Ban Ki-moon to interfere to end their suffering, and called on him to seriously work to resolve their humanitarian cause.

An official source at the Civil Society Affairs department in Gaza said, “The Palestinians, who are allowed to travel through the Erez crossing, are mostly patients, merchants or foreign nationals.”

The source, who spoke on condition of anonymity, told Al-Monitor, “Regarding the students trapped in Gaza, there are intensive communications between the Palestinian Authority’s leadership and the Israeli authorities to allow them to pass through the Erez crossing, and although these communications have not resulted in any serious decisions so far, there are promises that this matter will be discussed by the Israeli side.”

He explained that “Israel may agree that some of the students pass through the Erez crossing, and it is expected that it rejects the passage of other students. All of these things are subject to Israeli standards, which usually fall within the scope of security pretexts.”

Rami Abdo, director of the Euro-Mid Observer for Human Rights in Gaza, told Al-Monitor, “Based on international law that stipulates the right to education, we believe that the right of the Palestinian students must be protected and that the crossings must be opened to enable them to travel and not to deny them their right to education.”

Abdo added that the students have the right to travel through the Erez crossing, but he said Israel was using “flimsy security pretexts” to prevent all Gazans from traveling, which makes it subject to legal accountability and the need to assume its responsibility toward the occupied Palestinian people.

He also called on the international community “to assume its responsibilities regarding the closure of the crossings in the Gaza Strip, and the need to put pressure on Israel, to not remain silent and stand idly regarding what is happening, to not allow Israel to punish civilians, and to carry out the usual duties it advocates for in terms of the need to implement human rights."