The Israeli army has developed a survey for Palestinian travelers to fill out at the Erez crossing, in what some Palestinians argue is aimed at gathering intelligence information about the situation in Gaza. 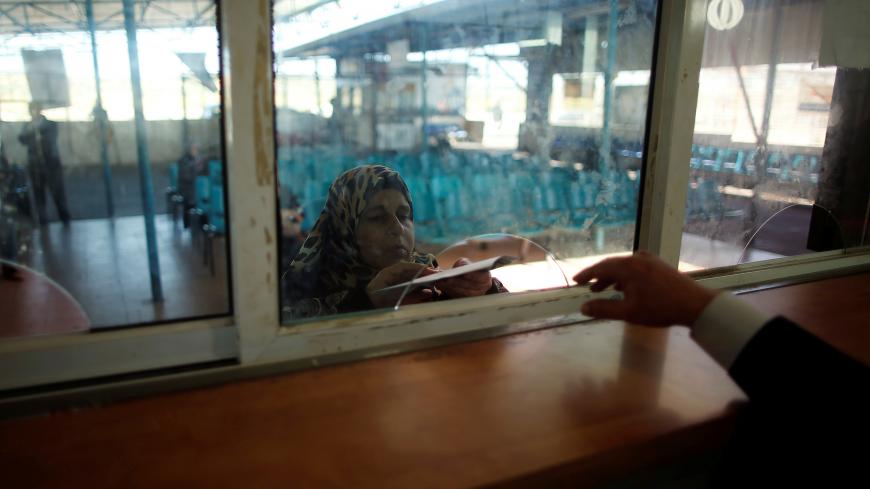 A Palestinian woman presents her document at the Erez crossing with Israel, in the northern Gaza Strip, Nov. 1, 2017. - REUTERS/Mohammed Salem

On Jan. 2, the Israeli army started asking Palestinians leaving the Gaza Strip through the Erez crossing to fill out a survey in Arabic, Haaretz reported Jan. 12.

Apart from the reconciliation process and the electricity crisis, the 17-question survey deals with the economic and security situation in Gaza and asks Palestinians who they think would govern Gaza three years from now.

A Palestinian who traveled through the Erez crossing Jan. 13 told Al-Monitor on condition of anonymity, “The Israeli intelligence handed me a survey as soon as I approached the Erez crossing. They were normal questions, but I felt that providing accurate answers would give the Israelis an idea about the situation in Gaza. While some questions were political, others tackled the security situation in Gaza and what may cause it to deteriorate. Palestinians are not being forced to fill out the survey, but they are complying nonetheless for fear of not being allowed to travel.”

A report by the Gaza Post, however, said Israel is forcing Palestinians in Gaza to give up information to travel through the Erez crossing.

Amid the continuing closure of the Rafah crossing, the number of Palestinians traveling through the Erez crossing is on the rise. Around 1,000 Palestinians leave the Gaza Strip on a daily basis through this crossing as they head to Israel, as per a report published by the Israeli Coordinator of Government Activities in the Territories (COGAT). These travelers include patients, merchants, university students, worshippers seeking to visit Al-Aqsa Mosque in Jerusalem, and staff of international organizations working in Gaza.

The Rafah crossing only opened in 2017 for 29 days at a time when 30,000 people in the Gaza Strip were registered to travel through Rafah that year.

Islam Shahwan, a professor of security sciences at Al-Awda University College in Gaza, told Al-Monitor that while the survey is "dangerous," nevertheless "some Palestinians are filling it out candidly and overlooking its security dimensions. There are trick questions that allow the Israeli intelligence to know in detail what is going on in Gaza. This makes me assume that an Israeli team of security and economic experts was behind this survey to give Israel's decision-making circles key answers to sensitive questions related to armed action, the deterioration of the security situation and the successor to Hamas in Gaza. It is as if Palestinians are being pushed to express their displeasure with Hamas and eventually revolt against it.”

In addition to the Erez crossing survey, the Israeli army distributed to citizens in the streets of Bethlehem a picture of a wanted man who the army claims carried out an armed attack against an Israeli target near Bethlehem in 2016. The army did not announce the name of the man, but it offered a financial reward for information that leads to his capture.

Also, Israel published on the website of Shabak, the Israeli Security Agency, a form in Arabic for Palestinians in Gaza to fill out and inform it of any tunnels, kidnappers and armed activities they might know of. It includes a telephone number to report such cases and offers a financial reward for such information.

The Israeli intelligence probably knows that this method may not help it get the information it wants from the Palestinians, but it has got nothing to lose by trying. By distributing the wanted man’s picture and offering a financial reward, it may be exploiting the poor economic conditions plaguing the Palestinians while ridding them of the fear to get in direct contact with Israeli intelligence.

Iyad al-Bazm, a spokesman for the Ministry of Interior and National Security in Gaza, told Al-Monitor, “The survey provides the Israeli intelligence with information about the security and political situation in Gaza, and this may help it lay out its anti-Gaza plans. We call on [Palestinian] citizens not to answer these questions and not to take them lightly. Israel prepared this survey due to the scarce information it has been receiving from Gaza following the severe security crackdown that the Interior Ministry started in April 2017 against collaborators with Israel in the Gaza Strip.”

These Israeli steps coincide with the policy of direct contact with Palestinians announced by Defense Minister Avigdor Liberman Jan. 19 in the Israeli daily Makor Rishon, as he addressed the Palestinians and called on them to revolt against Hamas.

Liberman had said in August 2016 that Israel would get in direct contact with Palestinian businessmen, academics, researchers and writers to convince them that the Palestinian Authority is a hurdle to the peace process with Israel. Also, the COGAT is addressing Palestinians through its Facebook page and answering their questions, particularly those related to the Palestinians’ entry permits to Israel and the nature of Israeli goods entering the Gaza Strip through the Kerem Shalom crossing.

There is no available data in Gaza indicating that such Israeli attempts to incite people against Hamas are working out, even if the increasing Israeli pressure may lead them to eventually revolt against it.

Said Bisharat, a Palestinian expert on Israeli affairs, told Al-Monitor, “Israel views the survey as a means to entrench its policy toward Hamas and weaken the movement at the military, economic and popular levels. Based on the answers to the survey, Israel can assess how likely it is for Gaza residents to revolt against the movement and thus make it easier for the Israeli army to confront it militarily. However, based on the survey, we believe that Israel is not looking for an alternative to Hamas because it considers it a strong party controlling the situation in Gaza, even if it wants to know how far Hamas would go with its armament concessions, should the movement feel that it is losing popularity.”

Yamen al-Madhoun, a field research coordinator at the Al-Mezan Center for Human Rights in Gaza, told Al-Monitor, “The survey places further psychological pressure on Palestinian travelers, especially traders and patients. It can also lead citizens to face security and political problems, so it should be canceled altogether.”