Hamas reaches out to Egypt

Although Egypt's campaign to destroy the tunnels between Gaza and Sinai continues, Hamas, whose relations with other regional countries are even more strained, is working to restore ties with its neighbor. 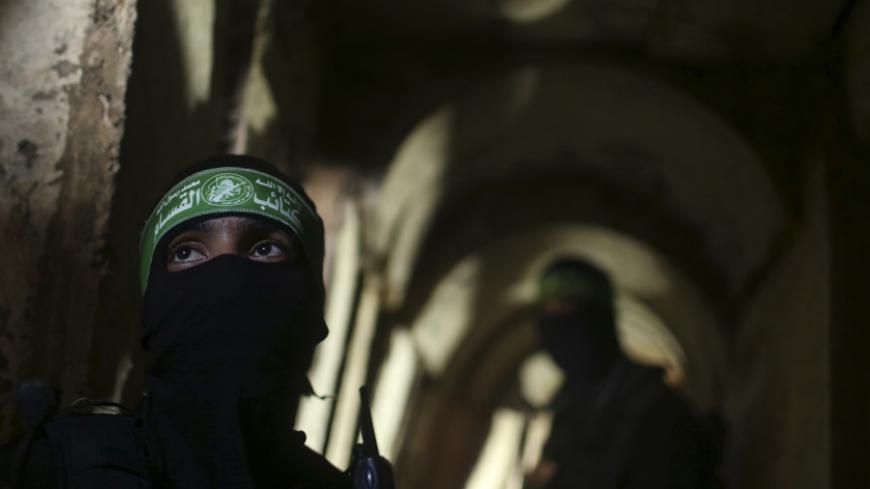 Palestinian fighters from the Izz ad-Din al-Qassam Brigades, the armed wing of Hamas, stand inside an underground tunnel in the Gaza Strip, Aug. 18, 2014. - REUTERS/Mohammed Salem

The tunnels are a major issue in the strained Hamas-Egyptian relations, with Hamas accused of using them to smuggle gunmen and weapons between the Gaza Strip and the Sinai Peninsula. When he took office in June 2014, Egyptian President Abdel Fattah al-Sisi decided to carry out a military campaign targeting the tunnels and the lines of communication they offer armed cells. On April 6, Egypt announced a firm plan to destroy them.

Al-Monitor made a recent visit to the border area between Rafah and Sinai and witnessed a series of bombings conducted by the Egyptian army as part of its expansion of the buffer zone.

An Egyptian security official told Al-Monitor on condition of anonymity, “Work is underway to complete the buffer zone along the border with Gaza. There is a conviction that no matter how many tunnels are destroyed in Gaza, smugglers and gunmen will rebuild them. A single tunnel is built in Gaza, and then turns into several tunnels inside Egypt, like a spider web that goes through houses and mosques.”

He added, “The tunnels that the Egyptian army is destroying are being rebuilt the next day in a tactical way. Once a tunnel is destroyed, Hamas moves back 10 meters [33 feet] and digs another one.”

Hamas parliamentarian Mushir al-Masri told Al-Monitor, “Hamas is interested in strategic ties with Egypt based on common interests, and cares about Egypt’s security as much as it cares about Palestinian security. We do not want to meddle in Egyptian affairs as much as we do not want interference in our internal affairs.”

Hamas seems more interested than ever in calming the situation with Egypt, as its regional ties are tepid and mainly limited to Iran. The movement’s relations with Syria were ruptured, though its ties with Saudi Arabia have started to improve. And because Egypt seems to be in control in Gaza — through the Rafah crossing on the ground and through the tunnels underground — Hamas is turning a blind eye to the accusations in the Egyptian media.

Ahmed Moussa, a well-known journalist and fierce enemy to Hamas, demanded April 12 that Hamas gunmen be tracked down inside the Gaza tunnels, saying the only solution is to shut them down from inside Gaza, not from Egypt. He also called on the Egyptian army to carry out a military operation against Hamas, similar to the one in Libya in February.

On April 13, Sisi issued a decree rendering the digging of tunnels on the border with Gaza punishable with life in prison.

Iyad al-Bazm, the spokesman for the Gaza Interior Ministry, told Al-Monitor, “The tunnels between Gaza and Egypt no longer exist, and are now part of the past after the Egyptian army shut them down more than two years ago. The border with Egypt is secure and under tight control of the Palestinian security services.”

Reliance on the tunnels seems to have progressively declined, made apparent by the lack of commodities and goods in the markets. Hamas has also been unable to acquire more weapons and ammunition, owing to the ongoing Egyptian campaign to eliminate the tunnels. But Hamas-Egyptian ties do not seem to be improving, and the Rafah border crossing remains closed.

Maher Abu Sabha, the director of the border crossings in Gaza, told Al-Monitor, “Egypt opened the Rafah crossing for only five days in early 2015, when 2,000 Palestinians passed through. More than 20,000 people have registered [a request] to travel at the Interior Ministry’s offices, but the number of those wishing to travel exceeds 90,000 people, including students, patients, foreign residents and foreigners stuck inside Gaza.”

On April 22, deputy speaker of the Palestinian parliament, Ahmed Bahar, asked Saudi Arabia to intercede for Gaza to open the Rafah crossing and alleviate the suffering of thousands of people who cannot travel for treatment and education.

Egypt and Hamas agreed upon a proposal on April 5 to hand over the Rafah crossing's management to the Palestinian presidential guards in partnership with the Egyptian troops stationed on the Gaza border so that it could be kept open permanently and alleviate the Palestinians’ suffering. The Palestinian Embassy in Cairo will handle the arrangements with Egypt.

For the Palestinians in the Gaza Strip, the situation today at the Rafah crossing is at its worst. Even in the era of President Hosni Mubarak, the Egyptian regime has always provided only the most basic necessities to Gazans. The regime would tighten the noose just enough to contain the situation, but not so much as to lead to an explosion, by giving the Palestinians a chance to breathe from time to time.

However, since Mohammed Morsi was ousted in July 2013, Egypt has tightened its grip by destroying the tunnels used to transport commodities and closing the Rafah crossing. The humanitarian situation in Gaza has become unbearable, and the Palestinians who survived Israeli rockets are now dying slowly from Egyptian policies.

On April 4, Egyptian intelligence services called on Hamas' political bureau member Mousa Abu Marzouk to open a communication line with Khaled Meshaal, the head of Hamas' political bureau. Egypt wishes to turn a new page with Hamas and restore ties. According to Abu Marzouk, the intelligence services consider Hamas not responsible for the acts of violence in Sinai. Remarkably, Egypt allowed Abu Marzouk to head to Qatar on March 20 for surgery.

Ismail al-Ashqar, Hamas leader and chairman of the Palestinian Legislative Council's Security Committee, told Al-Monitor, “Meetings will be held soon between Hamas leaders and Egyptian officials to discuss important issues between the two sides, as the current positive circumstances allow such an important meeting to be held between both parties.”

Hamas media spokesman Salah Bardawil announced April 23 that positive discussions have recently taken place between Hamas and Egyptian officials in Cairo. Without specifying when they happened, Bardawil said the discussions focused on certain files, including loosening the siege on Gaza and stopping the Egyptian attack against Hamas.

Hamas finds its ties with Egypt at present relatively acceptable, as compared with the serious tension that prevailed when Egypt threatened to strike Gaza in late March.

Easing the tension between Hamas and Egypt is a positive step that will enhance ties and alleviate the disastrous situation in Gaza. Hamas has great hopes of restoring the good relations with Egypt it enjoyed before Morsi was ousted and Sisi took office — ties that were never fully severed.