Though Israel is allowing some cancer patients to travel for treatment abroad, the many more whose permits have been denied say the move is for show. 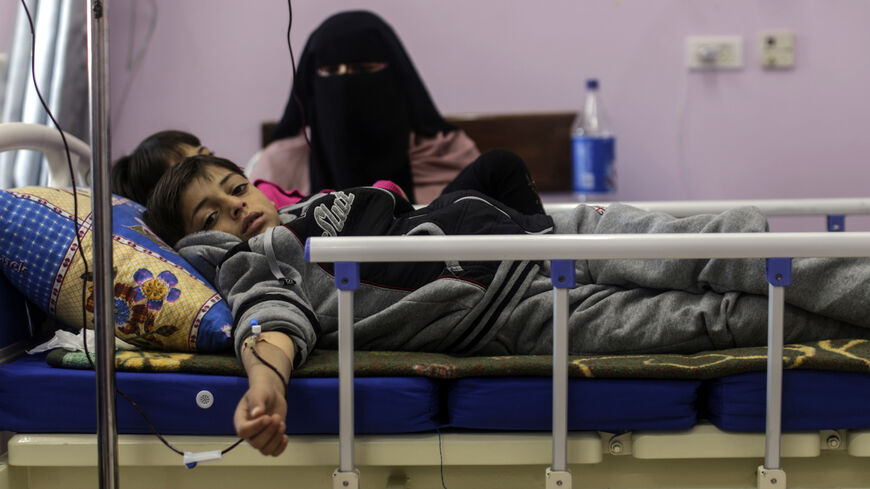 Palestinian children suffering from cancer receive treatment at a hospital in Gaza City on Feb. 13, 2018. - MAHMUD HAMS/AFP via Getty Images

GAZA CITY, Gaza Strip — Israel informed the Palestinian Authority June 3 of its decision to open the Erez-Beit Hanoun crossing for cancer patients to access life-saving treatment unavailable in the Gaza Strip. Israel closed its crossings with Gaza May 10 when it launched an offensive against the besieged enclave.

The fighting, which lasted for 11 days, ended with a cease-fire between Hamas and Israel on May 20. The latest escalation caused more than 1,900 injuries. But Israel continued to prevent patients from crossing the border for medical treatment.

A government source told Al-Monitor on condition of anonymity for security reasons that Israel opening the crossing for cancer patients is mere propaganda to help it avoid responsibility for the residents of the Gaza Strip. “Israel has only allowed access to 330 cancer patients out of 1,012” since the announcement, he said.

The source lamented, “There are many patients with life-threatening conditions who urgently need to travel for treatment, in addition to the large number of people injured during the latest escalation who cannot get the needed treatment in Gaza.”

Holding dozens of travel permit applications, the source said, “Israel has not stopped its aggression on Gaza. It is still condemning it to death indirectly. The number of requests to travel for treatment sent to Israel doubled after the recent war. Around 100 requests are submitted daily. Most of them remain unanswered. We do not know whether the Israeli side is examining these requests or just discarding them.”

The source explained that Israel wants to extort Gaza by withholding medical treatment abroad. “Israel is processing the patients’ requests in an unprecedentedly slow manner. [The General Authority For Civil Affairs] is communicating daily with the Israeli side and international and humanitarian institutions to pressure Israel to allow patients to travel.”

Physicians in the oncology department at the Rantisi Hospital refused to talk to Al-Monitor about the repercussions of preventing patients from receiving treatment abroad, saying only that the issue is political.

Al-Monitor spoke to journalist Fathi Sabah, whose 24-year-old daughter has been battling leukemia since 2012 and has to receive treatment in Israel every month. She missed her last appointment. “My daughter was supposed to leave for treatment on May 20, but Israel closed the crossing,” he lamented.

“Cancer," Sabah said, "needs uninterrupted treatment. We are unable to measure the adverse impact of the interruption of the treatment with no atomic scanning devices in Gaza. We will not be able to travel until our next appointment set by the hospital according to the treatment protocol. There are no emergency appointments. If you do not show up on time, you have to wait for the next appointment.”

He pointed out that his daughter was initially treated at Al-Mutlaa Hospital in Jerusalem. Since a bone marrow transplant at Hadassah Medical Center in Israel in 2017, she has received treatment there. “There is nothing we can offer her at the moment. We just have to wait,” he said.

A 58-year-old cancer patient spoke to Al-Monitor on condition of anonymity from her bed in Al-Rantisi Hospital. “We come here to take vitamins and supplements to give our exhausted bodies some strength. There is no cure for us here,” she said.

She added, “I felt a mass in my breast in 2020 but physicians in Gaza could not diagnose my disease. I was referred to the King Hussein Cancer Center in Jordan. My husband and I left in March 2020. We remained stuck in Jordan for more than seven months due to the coronavirus lockdown until the Israeli Maslak organization, which defends freedom of movement, was able to coordinate our return. We are waiting for a permit to cross over to complete the treatment. The cancer has spread all over my body. We were supposed to leave in January, but the Israeli side has yet to give us the permit.”

Her husband, 85, sitting on the bed next to her and monitoring the remaining intravenous solution, said Israel allowed him to travel, as he has also been suffering for 14 years from cancer, which reached his lungs. He is being treated in King Hussein Cancer Center but he does not want to leave his wife. “I can't leave and let my wife die here. She also needs to travel for treatment. We have to go together,” he added.

Eman Shanan, a breast cancer survivor and the director of the Aid and Hope Program for Cancer Patient Care in Gaza, told Al-Monitor she has received 40 requests from patients who were supposed to leave during the recent round of escalation, but were unable to do so due to the closure of the crossing.

“Cancer patients are on a treatment protocol that must be followed. Breaking or delaying this protocol has negative health effects, possibly leading to an uncontrollable spread of the disease,” she explained. “Most cancer treatments are not available in Gaza, notably radioactive iodine, atomic scanning, radiation, complex surgeries and chemotherapy.”

She noted that some patients went to government hospitals for immunotherapy while waiting for their treatment to resume, but these medications were not available there. “The Ministry of Health in Gaza is suffering a shortage of medications” due to the Israeli siege and PA restrictions, she said.

“As a cancer survivor, I refuse to let patients be a number. Treatment is a human right, and it is forbidden to exploit it in for political or security reasons,” she said.

Of the more than 8,600 cancer patients in Gaza, 75% leave the besieged enclave for treatment abroad, according to the Ministry of Health.

Shanan expects breast cancer to become a bigger problem with fewer women being diagnosed early, with the drop in screening amid the coronavirus crisis.