The political division between Gaza and Ramallah, in addition to the Israeli-Egyptian blockade, is leaving cancer patients in the Gaza Strip without adequate medical care. 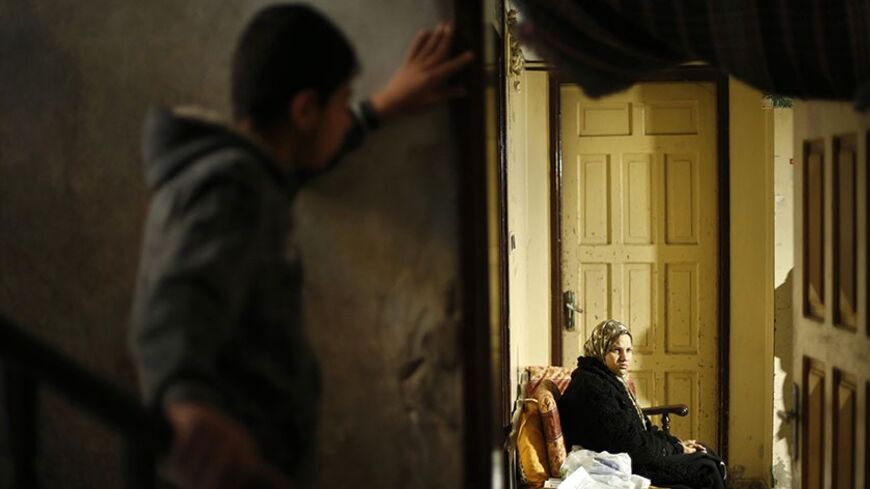 A Palestinian woman who suffers from cancer sits in her house after she was not allowed to enter Israel, Gaza City, Feb. 12, 2014. - REUTERS/Mohammed Salem

GAZA CITY, Gaza Strip — Nasser al-Sadek was standing, about four months ago, in his electric appliances store in the town of Jabaliya in the north of the Gaza Strip, when he felt a sharp pain in his chest. He visited a doctor at the hospital who gave him medication for inflammation, but the pain persisted. He returned to the doctor, who conducted tests to reveal the presence of tumors inside his lungs, which, analysis proved, were cancerous.

Doctors at the Shifa Hospital in the Gaza Strip decided to transfer Sadek, 44, to an Israeli hospital to complete the required tests and receive chemotherapy, because Shifa lacked the facilities to diagnose and treat the disease. After receiving an appointment from the Israeli hospital, as per the relevant procedures, he submitted an application to the Civil Affairs Committee for permission to enter Israel.

Israeli security authorities refused, on multiple occasions, to issue Sadek a permit. He waited 23 days before he was allowed to cross the border and go to the hospital, where he learned that the cancerous tumors had spread to his brain. He remained in an Israeli hospital for a month, during which his medical condition was diagnosed and he was given initial treatment, subsequently returning to the Gaza Strip.

Sadek’s doctors again determined that he needed radiation therapy, which is unavailable in Gaza hospitals. His wife set about to obtain the necessary paperwork and schedule an appointment for him at a Palestinian hospital in Jerusalem, or even an Israeli one. Another 23 days passed until the appointment was scheduled, by which time the cancer had spread to parts of his liver.

Sadek, who has eight children, lies unconscious in the Shifa Hospital’s Hematology and Oncology Department. By his side is his wife Nadia al-Sadek who recounted to Al-Monitor the details of her husband’s predicament. She noted the uncertainty she felt about his fate as the disease was spreading throughout his body, while Israeli hospitals refused to admit him because of his deteriorating condition and the difficulty of his treatment.

Nasser is one of 12,600 cancer patients in the Gaza Strip, 53% female and 47% male, according to statistics published by the Palestinian Ministry of Health in the Gaza Strip. These figures came to complement a 2012 fact sheet issued by the Al Mezan Center for Human Rights, which stated that about 900 cancer cases were recorded annually, with breast cancer accounting for 16.5% of cancer cases in women.

Health services for cancer patients in the Gaza Strip are extremely inadequate. This adversely affects the patients’ chances of recovery and exacerbates their suffering. The coastal strip is home to three oncology and hematology departments among three hospitals: the Shifa Hospital, the Gaza European Hospital in Khan Yunis and the Al-Nasr Children's Hospital.

Ziad Khaznadar, an oncologist at Shifa Hospital, told Al-Monitor that the department suffered from a “shortage of specialist physicians, as well as a lack of facilities and equipment required to diagnose the disease.” Furthermore, he noted that chemotherapy doses were always late to arrive, and “complementary medicines needed by the patients after chemotherapy are also hard to come by. This is a result of the political situation in the Gaza Strip and the absence of adequate coordination between the health ministries in Gaza and Ramallah.”

The Israeli-Egyptian blockade applied to the densely populated coastal strip has increased the suffering of the patients. Patient transfers to Egypt were nearly completely stopped, thus leading many patients to head to hospitals in the West Bank and Israel. However, the overcrowding meant many had to wait to get a reservation in these hospitals, Khaznadar said.

The hospital’s Hematology and Oncology Department is equipped with 19 beds, all of which are occupied; in addition to four isolation rooms that are not fully equipped. The nurse in charge of the department told Al-Monitor that files existed for dozens of patients who remained on the waiting list to receive treatment. Some of these patients wait in excess of two weeks, as a result of the unavailability of beds in the department.

Al-Monitor visited the oncology department at Al-Nasr Children's Hospital, where 4 specialists are on duty and where only 13 beds are located, all of which occupied. Dr. Awad al-Haloul, a child hematology and oncology specialist, believed that the number of beds was insufficient, necessitating that most cases be transferred to hospitals in Jerusalem and Israel.

Speaking to Al-Monitor, Haloul said that many of the specialized modern analyses and treatments are not available in Gaza hospitals. Furthermore, there are constant delays in the delivery of some chemotherapy medications that the hospital is able to administer. As a result, cases are urgently transferred to West Bank and Israeli hospitals, where those treatments are available.

Young Azhar Shaheen, 4, suffers from leukemia and was receiving chemotherapy in one of the department’s rooms, accompanied by her mother. She stayed for six months at an Israeli hospital to receive treatment that was not available in any of the Gaza Strip’s hospitals. Yet, when her mother was informed by the attending physician that treatment was now available in the Gaza Strip, she did not hesitate to return there and look after her family of six.

The political conflict between rivals Fatah and Hamas is still causing delays in the arrival of necessary medicines to Gaza. Hamas regularly accuses its political opponent of not sending the full amount of medicine the Gaza Strip needs, or sometimes deliberately delaying its delivery. At times, the Gaza government had tried to cover the deficit through medicines that arrived with delegations coming through the Rafah crossing on the border with Egypt. However, this has completely stopped since the ouster of President Mohammed Morsi.

A news release issued by the Aid and Hope Program for Cancer Patient Care on World Cancer Day, Feb. 4, indicated that "cancer was the second leading cause of death in Palestine, after heart and cardiovascular diseases … new cancer cases rose by 20%" in 2012.

Speaking to Al-Monitor, the program’s director, Iman Shanan, accused Palestinian political forces of exacerbating the suffering of cancer patients as a result of the prevailing political divisions. “Political causes are primarily responsible for many of the areas where there are deficiencies in the treatment of cancer patients. Add to that the bureaucratic hurdles inherent in the procedures relating to dealing with, treating and transferring patients,” said Shanan.

Nasser al-Sadek, Azhar Shaheen and the thousands of other cancer patients in the Gaza Strip did not choose to be afflicted with their disease. Moreover, they did not know that this dangerous ailment, which might lead to their death, would preclude them from receiving their most basic human rights to secure proper diagnosis, treatment or the right to travel and be admitted to a hospital capable of helping them heal. But, their presence in the Hamas-ruled Gaza Strip caused them to suffer twice, once as a result of the disease and again as a result of politics.