The Israeli authorities continue to detain and interrogate Gazans traveling into Israel via the Erez crossing, including those who are ill and seeking medical treatment. 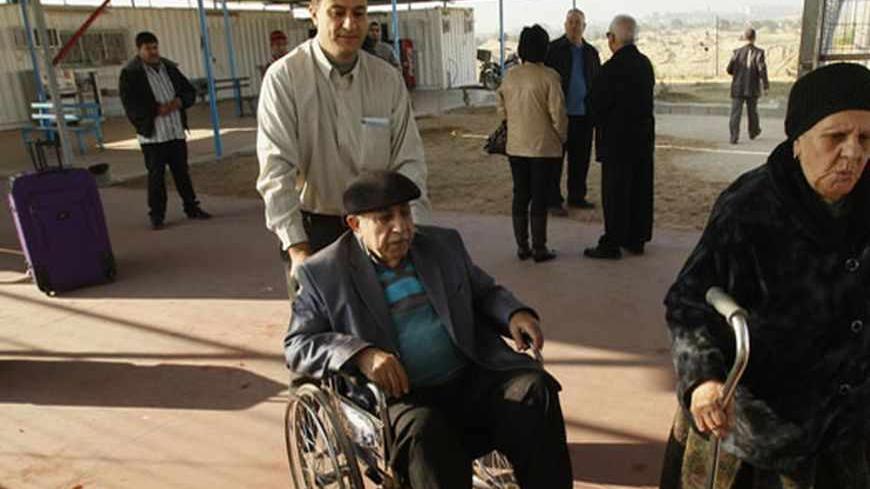 Christian Palestinians leave the Erez border crossing in the northern Gaza Strip, Dec. 22, 2011, as they make their way to the West Bank town of Bethlehem to celebrate Christmas. The Israeli army gave permits to some 500 Christian Palestinians from Gaza to enter Israel as they make their way to Bethlehem to celebrate Christmas. - REUTERS/Ibraheem Abu Mustafa

“It was silent save for the whispers of praise, the recitations of the Quran and the shuffling feet of some Israeli soldiers. All of a sudden, while we were waiting for permission to traverse the crossing that separates Gaza from Israel, they took my husband without reason!

“I don’t deny that I was in a state of fearful anticipation. Questions build in my mind and my heart began to race faster and faster. My eye continued to hurt me but I did not let this show. Fate had decreed that I would spend that night experiencing a harsh reality. Voices grew nearer and the shuffle of feet marked the arrival of the last of the soldiers. They had taken my husband to a faraway place, and later I learned that they had detained him.”

Um Yousef Maarouf lost all hope of treating her eye after the Israeli occupation detained her husband Zahir at the Beit Hanoun-Erez crossing in the northern part of the Gaza Strip last week. He was accompanying his sick wife because the only treatment option available to her was going to an Israeli hospital inside occupied Palestine.

Um Yousef arranged her affairs, grabbed her clothes and bag, gathered her remaining memories of the day her husband was detained and in a daze returned to the Gaza Strip without receiving treatment.

In recent years, the Erez crossing — which separates the Gaza Strip from Israel — has become a trap, the victims of whom are subject to detention and investigation, while others are blackmailed into becoming informants for Israeli intelligence services. They are offered entrance into the West Bank for treatment or visitation in exchange for information regarding the resistance.

Maarouf's family based in Sheikh Ramadan was shocked by the detention of their father, Zahir Yousef Maarouf, 52, who had accompanied his ailing wife for an eye operation at St. John's Hospital in occupied Jerusalem.

His wife's life had been ruined — as she told Al-Monitor — by the imprisonment of her husband, who remains in an Israeli prison without charge. His detention is unjustified, his wife insisted, given his flawless record in security matters and the nature of his work as a merchant that required him to enter Israel twice a week. “The occupation authorities had never denied him entrance before.” Moreover, she was not able to undergo eye surgery to treat the excessive tearing of her eye.

Um Yousef added, “We learned from the lawyer that his detention had been extended and that he had been transferred to a detention center in Ashkelon Prison. Due to the lack of ground for conviction by the occupation forces, there have been continuous promises of his release for two weeks. However, these promises remain unfulfilled.”

To obtain the necessary permits to pass through the Erez crossing, the sick are forced to submit applications to the Palestinian Ministry of Civil Affairs which subsequently refers them to the Israeli side. Despite accepting these applications for permits, the occupation forces still subjects many Palestinians who cross to investigations at the crossing and detains others.

In an interview with Al-Monitor, Um Yousef's son, Mohammed, said that the family had called St. John's Hospital to postpone the operation and explained that his mother is no longer able to enter and undergo the operation after her husband was detained.

The family inquired with the International Red Cross headquarters in Gaza — the main point of contact between Palestinians and Israel on detention issues. The Red Cross informed the family that it has commenced procedures to learn the reason and details of the detention, which has already lasted for 14 days.

The occupation regularly blackmails the sick and inhabitants of the Gaza Strip who need to travel through the Beit Hanoun crossing. Detentions at this crossing have recently increased, and it is believed that Zahir Maarouf is one of many who have been detained without reason.

Some of the sick who are deprived of treatment or face harassment and detention — such as in the case of Um Yousef — need to book other appointments. This process takes days and poses a problem for the sick whose states of health often do not allow for additional time.

In a report issued on Feb. 1, 2013, the Al Mezan Center for Human Rights said, “The Israeli occupation forces continue their arbitrary detention policy of Palestinian patients and escorts seeking travel via the Erez crossing in the Gaza Strip, as well as subjecting the sick and those accompanying them to security interrogations.”

According to the report‪, six people were detained in 2012, including four patients‪ and two escorts. The center has also documented the detention of 22 patients and escorts at the border crossing from the beginning of 2009 until the end of 2012. These include 19 patients and three escorts.

Amid the suffering faced by those traveling through the Erez crossing, Um Yousef awaits her husband's release — for them to be allowed to once again enter Israel for a procedure that was scheduled to take place had Um Yousef's husband not been arrested.