Is Gaza Honey Mixture The Next Viagra? 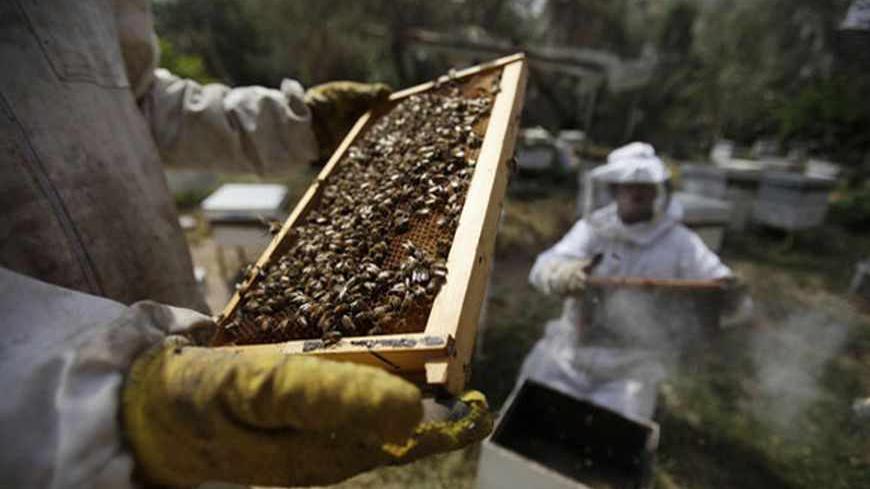 A Palestinian beekeeper checks a honeycomb before collecting honey at a farm in Rafah in the southern Gaza Strip, April 9, 2013. - REUTERS/Ibraheem Abu Mustafa

Gaza resident Hussam Mansour selects the finest honey from outside Palestine and uses it to produce complex mixtures to treat several diseases for which modern medicine has no treatment.

Mansour has treated 25 infertile couples who had been unable to bear children for years, by means of pure honey supplemented with vitamins and pollen.

Mansour, 52, has produced this treatment after more than 25 years of experience, work and trade in bee honey. He developed a mixture that cures many diseases, including erectile dysfunction (ED), inflammatory hepatitis, stomach ulcers, inflammation of the prostate and the duodenum, in addition to nervous system issues.

Mansour mixes the honey with a number of different types of pollen and with so-called royal jelly, a substance excreted from the salivary glands of worker bees. When worker bees decide to make a new queen, they choose several small larvae and feed them royal jelly to trigger the development of queen morphology.

In an interview with Al-Monitor, Mansour said that royal jelly can treat hepatitis and infertility because it contains many types of vitamins. “Very few people in Gaza import royal jelly,” he said.

Mansour imports all kinds of honey and royal jelly from the United Arab Emirates (UAE). He mixes the honey with the vitamin-rich propolis, which is considered a natural antibiotic because it inhibits bacterial growth. “After men suffering from ED and infertility take the honey mixture for three to six months, their sperm count rises,” he said.

Gaza resident Salim Abu Muslim, 31, was treated with Mansour’s natural mixtures after he failed to have children for six years. Abu Muslim told Al-Monitor that he had to sell his house to pay for the medical treatments, all of which failed. But then he tried Mansour’s treatment. “My wife gave birth to a baby girl after eight years of marriage and medical treatments. I had a low sperm count, but [Mansour’s] mixture raised my sperm count from 65% to 85%, according to medical tests taken 15 days after completing [Mansour’s] treatment. And I had another child six months ago,” he said. He also said that the mixture relieved his penile inflammation and increased his libido.

Mansour said that after taking two of his mixtures he cured a man from the UAE who had been unable to have children for nine years prior.

Mansour also treats second- and third-degree burns by covering the burn area for one week with an Afghan honey mixture that contains 2.4% sugar.

According to Mansour, the amount of sugar in so-called first-class honey is less than 5%; for second-class honey, it is more than 5%. Honey with more than 10% sugar is of poor quality.

Mansour used to live in the UAE and moved to Gaza two years ago. He was frustrated that Palestinians were uninterested in quality honey. They used any kind of honey, even if it had high sugar. They were also uninterested in alternative medicine.

Despite what Mansour achieved through his treatments, he still believes that many of honey’s secrets are yet to be discovered.