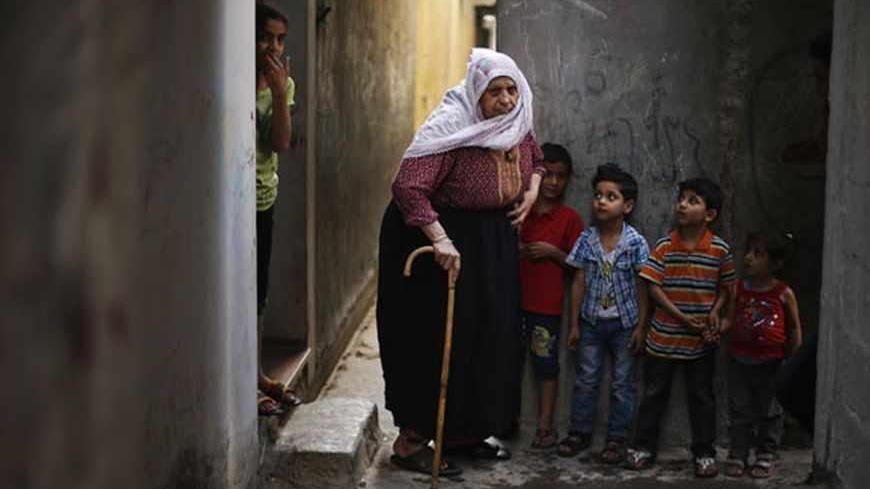 Palestinian refugee Fatem Redwan, 76, walks next to her grandchildren in the narrow alleys of Jabalya refugee camp in the northern Gaza Strip, May 14, 2013. - REUTERS/Suhaib Salem

In the past few weeks, Palestinians have been incensed by a number of cases of arson and murder in the Gaza Strip causing several deaths and injuries.

The last of these incidents was the killing of Amin Shrab, 60, a currency trader. He was found dead in his shop near the Great Mosque in Gaza City. A pharmacist was injured after being assaulted with a sharp object in the Sheikh Radwan neighborhood in northern Gaza City. According to the Palestinian police, the motive behind the crimes was theft.

Police spokesman Ayyoub Abu Shaar said in a press statement last Friday, May 31, that Shrab’s killer assaulted his victim by stabbing him in the chest and giving him a blow to the head.

Another young man died and his body was found on the Gaza shore. Abu Shaar said that the victim drowned and the damage to his body was caused by it staying in the sea for several days.

Mustafa Ibrahim, a researcher for the Independent Commission for Citizens’ Rights, told Al-Monitor that eight citizens were killed in the Gaza Strip in May. The deaths were the result of family disputes, robberies, tunnel collapses and suicides.

He pointed out that the commission observed a significant increase in the rate of violence in the West Bank and Gaza from the beginning of the year until April compared to the same period last year.

He added that about 61 people were killed in Gaza and the West Bank because of family disputes, misuse of weapons, tunnel collapses on the border with Egypt, apartment building collapses and the lack of safety measures in industrial workshops and other places.

Abu Shaar said that government security organs in Gaza arrested most of those accused of crimes in Gaza, except Sharb’s killer.

Massoud Abu Hilal, a Gaza resident, was killed last month after an altercation with his brother turned into a fistfight. The victim was stabbed in the neck. The offender fled and the corpse remained in the house for four days.

Ziad Musa Abu Musa, a resident of al-Shaboura Camp in Rafah in the southern Gaza Strip, burned himself in the Gaza Center for Mental Health, where he was being treated for mental disorders. Tawfiq Abu Hassanein, a 49-year-old captain in the National Security Agency, tried to burn himself but people prevented him from doing so.

Several murders happened before these burning incidents. In May, a 25-year-old pregnant woman in Khan Younis named Nawal al-Najjar was killed during a family quarrel.

A few days before this incident, Moataz Abu Safia, a reporter for the Algerian TV station Al-Mashruq, and his uncle, lawyer Ahmad Abu Safiya, were killed during a family fight. Four others were wounded, including a girl. The incident happened near the Abu Mazen roundabout in western Gaza.

Al-Mezan Center for Human Rights documented the killing of 13-year-old Basma Saleh, and the injury of her 17-year-old sister Amani on May 17, as a result of a fight near their home in the Bureij camp while they were on the balcony.

Following these murders, Attorney General Ismail Jabr in Gaza promised to carry out all death sentences.

Jabr said that the sentences will be carried out “after the appeals are exhausted,” and that the people should know about executions beforehand, without giving further details.

For his part, Abu Shaar said that the recent crimes disconcerted Gaza citizens, and that the police are seriously fighting crime. He stressed that most deaths are related to family troubles, assaults or suicide.

Ibrahim said that the crime rate is related to the living conditions, particularly in Gaza. He said that the high unemployment rate, the Israeli blockade and the continual power outages are frustrating the people.

“The government exercises repression and tyranny against the citizens. The police and security agencies exercise violence in various forms, from illegal detentions to restrictions on civil liberties and expression. There is a continuous deterioration in human rights,” he said.

He also stressed that the internal Palestinian division between the West Bank and the Gaza Strip has resulted in social disintegration, unemployment and poverty, as well as psychological pressure from everyday worries.