Hamas continues to dismiss Gaza's rising suicide rates as a result of a lack of religiosity in society. 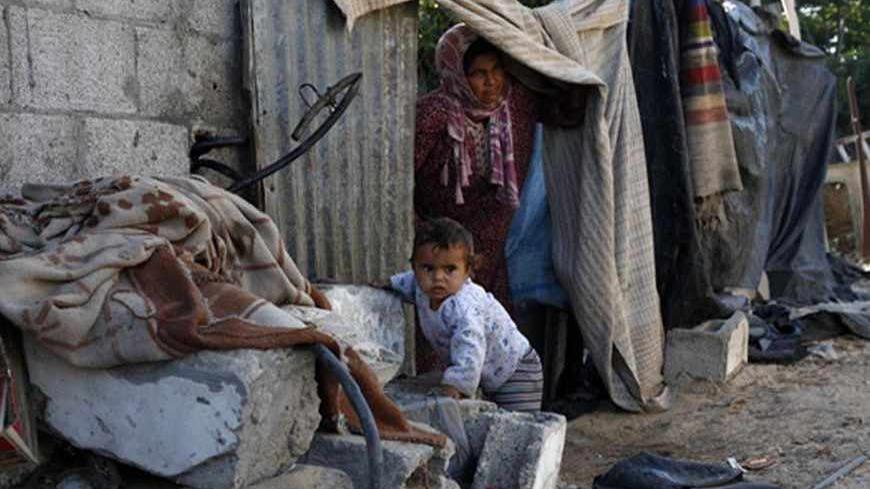 A Palestinian boy plays outside his family's dwelling as his mother looks out in Khan Yunis in the southern Gaza Strip, June 15, 2013. - REUTERS/Ibraheem Abu Mustafa

Since the beginning of 2013, the Gaza Strip has been witnessing a sudden rise in the rate of suicides by various means and methods including hanging, immolation and jumping from high heights — mostly as a result of the difficult living conditions.

On June 27, Gaza police found 25-year-old Nidal Mohammad al-Adlouni, a resident of al-Namsawi neighborhood in the Khan Yunis governorate, hanging inside his grocery shop in the south of the Gaza Strip.

Police spokesman Lt. Col. Ayoub Abu Shaar said in a statement issued on June 28 that information indicates that Adlouni was found hanging inside his shop, pointing out that he was already dead when he arrived at the hospital.

In an interview with Al-Monitor, Abu Shaar said, “The police considers the recent suicides in the Gaza Strip a serious matter.”

He highlighted that a lack of a religious deterrent and weak adherence to Islamic doctrine are the reasons why the victim chose to end his life. He said that the way to remedy these cases is through guidance by preachers and guidance by imams, who must warn people of the societal risks of suicide and its illegitimacy in Islamic Sharia law.

Dr. Ayman al-Sahbani, head of the reception department at Shifa Hospital — the largest medical complex in the Gaza Strip — reported that the hospital receives up to 30 patients who have attempted suicide per month. They attempt to end their lives using a variety of methods including pain killers, pesticides, cutting, jumping from heights, firearms, immolation or hanging.

In an interview with Maan News Agency, Sahbani explained that those who attempt suicide are mostly youth and described the cases they have seen in the hospital ranging from slightly to mildly serious.

Regarding the reasons for these suicide attempts, he said, “It is not our area of expertise to ask about the motives, but they are mostly related to family problems, unemployment or educational problems.”

Mustafa Ibrahim, a member of the Independent Commission of Human Rights, believes that economic and social reasons drive people to end their lives, especially in light of the difficulty in finding work and the high rates of unemployment and poverty among the Palestinian community in the Gaza Strip.

In an interview with Al-Monitor, Ibrahim said that a person’s inability to bear the harsh living conditions and difficulties, and overcome the crises he has to endure, leads to taking the difficult decision to end his own life. This is also related to the government’s failure to fulfill its promises and provide employment and social security to the people, in addition to a lack of equal employment opportunities.

He added, “As a human rights body, we usually do not document all suicide cases, since the concerned families are hesitant to talk to us.” He noted that the shame attached to Palestinian families having lost members as a result of suicide makes talking about this issue a taboo.

Ibrahim pointed to recent cases of immolation, which have increased since the beginning of 2013 in the Gaza Strip. He stressed that they usually occur when a person loses all self-control, and is unable to determine the course of his life, in light of the bitter economic and employment reality experienced by residents of the Gaza Strip.

He called on the government to meet people’s everyday needs, restore their confidence, provide a minimum level of reassurance to citizens and refrain from taking measures that cause people to lose confidence.

On the other hand, the Gaza government indicated that suicides are caused by the lack of a religious deterrent and a weak adherence to Islamic doctrine by the person having committed suicide, or due to a psychological illness. In this respect, Ibrahim called on the government not to rely only on these results and seek to meet the people’s living needs.

Moreover, Walid Mosbah, a specialist in social psychology, confirmed that suicide is not a new phenomenon in the Gaza Strip, but suicide rates increase and decrease according to the living conditions experienced of the Gaza’s citizens.

In an interview with Al-Monitor, Mosbah said, “Our society is facing a tense period in light of high unemployment and blockades. Families are suffering from restrictions imposed on them and from continued power outages, which affects the morale of the people. All of these factors combined lead to a variety of psychological distress, thus pushing numerous persons to end their lives.”

“We all saw and heard recently about the numerous incidences of suicide and immolation, but all of these crimes do not have similar circumstances, details and causes. In other words, there are several different factors leading to the occurrence of such crimes, which may be social, economic, psychological and intellectual, as well as some that are driven by revenge,” he continued.

Regarding the high rate of suicide attempts, Mosbah said, “Talk of 30 suicide attempts per month reflects a significant increase,” indicating that the situation experienced by citizens in the Gaza Strip has become very difficult.

Mosbah stressed the role of the government in facing and preventing suicides and immolation cases by spreading hope and opening the political and economic horizon toward a better future, and by providing citizens with the means to sustain their lives, their future and that of their children.

On June 24, 30-year-old Yousef Nassar died after pouring a flammable substance over his body and setting himself on fire in the Shujaiyeh neighborhood east of Gaza City.

On the same day, a high school student died after throwing herself from the fourth floor of her home in Tel al-Zaatar neighborhood in the northern Gaza Strip.

On June 14, in the city of Khan Yunis in the southern Gaza Strip, Ibrahim al-Tartouri poured gasoline over his body and set himself ablaze to protest the government’s decision to demolish his family-owned factory and build a mosque in its place, while his brother, Mohamed, was injured trying to help him.

The family of the two brothers said that the Hamas authorities tried to demolish the factory built on a piece of land that had been leased from the Palestinian Authority for many years, without obtaining any judicial decision.

On June 3, a 27-year-old man survived when he lit fire to a room in his family home in Al-Salam neighborhood, east of Rafah in the southern Gaza Strip. He admitted that he had intended to commit suicide following a dispute between him and his father, who wanted him to move out.

On May 30, 45-year-old Ziad Abu Musa from the town of Rafah burned himself to death, after pouring a flammable substance on himself.

The next day and in the same city, citizens foiled a self-immolation attempt by 49-year-old Tawfiq Abu Hassanein, who tried to set himself ablaze after hearing about his salary cut.

On April 13, 22-year-old Noura Solomon, a resident of El-Shaboura refugee camp in the center of Rafah, died due to the burns she sustained on April 6. Solomon tried to commit suicide by pouring flammable substances over herself and lighting herself on fire.

In this context, the Popular Front for the Liberation of Palestine (PFLP) issued a statement on May 31, saying that the rise in murder and suicide cases in the Gaza Strip is a serious indicator of the low level of security and safety provided to citizens, and of pressures and tensions experienced by society. The latter threaten the social fabric and its coherence and lead to a rise in crime rates.