Are Metro suicides sign that Egyptians are losing hope?

A spate of metro suicides in Egypt has been a wake-up call for the authorities, alerting them to the growing discontent in the country. 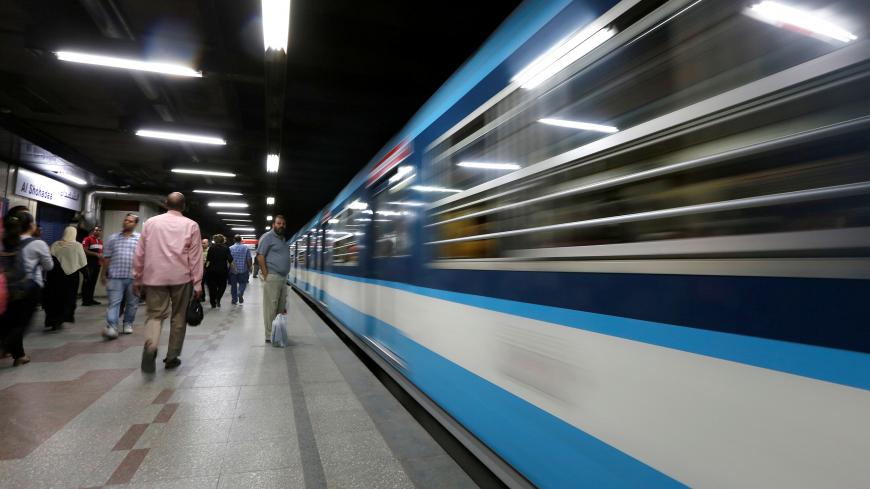 The Cairo Metro is often described as an efficient and safe means of transportation in a city notorious for its anarchic traffic. For the millions of Egyptians who use the subway daily, it is the preferred way of getting around the congested city. Female-only cars allow women to avoid sexual harassment, which is all too common on Cairo's crowded buses and streets. Lately, however, the Cairo underground has been used by an increasing number of Egyptians for an entirely different purpose, albeit a deadly one.

Since March 2018, at least eight people — most of them under the age of 25 — have attempted suicide by jumping in front of speeding trains. Six were killed by oncoming trains. The two who survived include a 17-year-old girl, who, before she jumped on the tracks, had been quarreling with her mother in the crowded Ezbet El Nakhl Station on Sept. 5. Though she survived, she suffered serious injuries. The other survivor, a 41-year-old telecom company employee, had his leg amputated as a result of his attempt to take his own life.

On Jan. 15, Omar Hassan Ali, 22, a university student, threw himself under the wheels of a train approaching Mar Girgis Station in Old Cairo, the latest Metro suicide to shock the country. In Egypt's predominantly Muslim society, suicide is considered a sin. According to the hadiths, or sayings of Prophet Muhammad, those who take their own life "suffer eternal hellfire." They also bring shame upon their families. Those beliefs, however, have failed to deter the suicide seekers who — apparently out of desperation, anger or frustration — attempted to end their lives in this brutal manner. The fact that they have chosen to do so publicly, rather than privately at home, is believed by some sociologists to be a form of protest or a statement against the conditions that drove them to commit their act of despair.

"It's a cry for attention; they were trying to send a message [about their plight] to the entire society. If they had quietly committed suicide at home, the message would have been lost," Saeed Sadek, a professor of political sociology at Ahram Canadian University, told Al-Monitor.

He added that the Metro reaches poor areas, where the levels of stress and socio-economic pressures are high. "Public suicides are driven by social, political, economic and psychological factors," he said. "Taking one's life is often a backlash against the harsh circumstances a person has had to endure. Difficult living conditions often cause depression, especially if there is no way out. In most suicide cases, the person suffers from depression because he or she sees no hope and no future."

Financial hardship also plays a role in the increasing public suicides in Egypt. Since the flotation of the Egyptian pound in November 2016, dire economic conditions have pushed up prices of fuel and basic commodities, piling pressure on Egyptians struggling to make ends meet. Compounding people's frustrations and low morale are high unemployment rates, especially among youths: 77.9% of youths aged 15 to 29 are without jobs, according to CAPMAS, the national statistics agency. Disappointment at the unmet aspirations from the 2011 revolution is another cause for depression among young people who participated in the uprising that unseated President Hosni Mubarak. Restrictions on freedom of speech, including arrests and detentions of anyone remotely critical of government policies, have made it difficult for citizens to express their grievances and vent their pent-up resentment.

In Egypt's patriarchal society, girls and women are subjected to harmful cultural practices, including female genital mutilation and other forms of gender-based violence that often cause trauma and anxiety. Sexual relations outside of marriage are taboo and the high cost of marriage is beyond the means of the average Egyptian. A growing number of youths are resorting to substance abuse to help them cope with emotional distress and family issues.

Those and other challenges have contributed to a rise in psychological disorders. And yet, many of those affected are reluctant to seek treatment, either because of the stigma associated with mental illness, or because they cannot afford to pay for medical help. A survey conducted by the Ministry of Health in April 2018 found that one-fourth of the population was suffering from some kind of mental health problem, particularly anxiety and substance abuse-related depression. Many of those affected are from rural communities, where poverty is rampant and opportunities are scarce, according to the survey.

With an annual rate of four suicide deaths per 100,000 people, according to the 2019 World Population Review, Egypt is among the countries with relatively low suicide rates, ranking 143 out of 176 countries on suicide globally. But the statistics offered by this and other polls are up for dispute, given that many suicide cases go unreported or are misclassified due to the sensitivity of the issue.

While subway suicides have attracted more media attention than other suicide cases, they are by no means the only method of suicide utilized in the country. Jumping off a bridge into the Nile River, with the intent of drowning, is not altogether a rare occurrence in Egypt. Depressed Egyptians are also known to commit suicide by hanging themselves or by overdosing on sleeping pills. Several reports have surfaced of people setting themselves on fire in public places. Such cases are reminiscent of — and were likely inspired by — the self-immolation of Mohamed Bouazizi, the Tunisian fruit seller whose act of despair sparked the Arab Spring protests in late 2010. In a deeply disturbing incident in October 2016, Ashraf Mohammed Shaheen, a 30-year-old taxi driver, set himself on fire in Alexandria to protest the high prices and poor living conditions. It is unclear whether he survived.

In yet another suicide, a 19-year-old student jumped to his death from the top floor of the Cairo Tower on Gezira island in June. He was about to take his Thanaweya Amma, or secondary school, exams, and had been facing enormous pressure from his parents to get good grades. Thanaweya Amma students often suffer a great deal of anguish and frayed nerves before their exams, as their future careers hinge on their scores. Their grades determine which universities will admit them and even, more importantly, the areas of study they are able to pursue. Three months earlier, another young man attempted to jump to his death from the top of the Pyramid of Cheops, the tallest of the three Pyramids of Giza. He was overtaken by security guards, who forced him to climb down and then arrested him, according to local media reports.

The Metro suicides have spread alarm in Egypt, both for their unprecedented as well as violent nature. Transportation officials, however, downplay the suicides. Said Taimeh, a member of parliament's Transportation Committee, dismissed the Metro suicides as "acts by people who have strayed away from the faith," according to Asharq al-Awsat.

Ali Fadali, director of the National Metro Authority, criticized the suicide attempts as “irresponsible acts by selfish individuals.” He added that the suicides disrupt the lives of millions of citizens and disturb public order.

The harshest response came in a press statement from Ahmed Abdel Hadi, the spokesman for the Metro Authority. After a Sept. 2 suicide attempt during rush hour at the Gamal Abdel Nasser Station, he said that the transit system incurs huge losses as a result of suicides. He lambasted those responsible for the chaos, telling them that "the Metro is not a suicide instrument" and that they should go elsewhere to commit such acts.

"Millions of people depend on the transit system to commute to and from work on a daily basis," he said. "The Metro should not be a suicide destination for people with mental illnesses." He added that surveillance cameras have been installed at all stations in a bid to prevent such incidents from happening.

Skeptics doubt that the new surveillance system will curb the Metro suicides, but their increase has served as a wake-up call to Egyptian authorities: Egyptians need more access to mental health care. Given the continued political repression and struggling economy, stress and anxiety will likely increase in the period ahead. Without medical attention for depression and other mental health challenges, Egyptians could be headed for trouble.