The doctors in the Gaza Strip who worked during the late war recall the pain they went through when dealing with the victims, and speak of the psychological scars they bear in the war's aftermath. 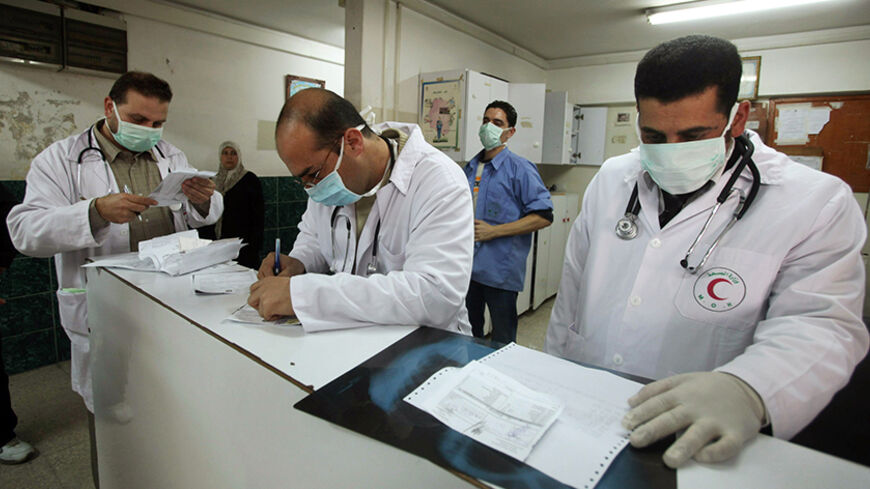 GAZA CITY, Gaza Strip — “It’s pure madness.” This was how the head of the reception department at Gaza’s Shifa Hospital, Ayman al-Sahbani, described the situation experienced by the doctors who dealt with the thousands of wounded during the 50-day Israeli war on the Gaza Strip. Meanwhile, the health sector has suffered and was still suffering from numerous crises, including shortages of medicine and fuel and delayed salaries for doctors.

Sahbani is still haunted by death and torn bodies that he witnessed while working at the hospital. Every time he looks at his children, he remembers the children who died in his arms while he tried to save them.

Sahbani told Al-Monitor, “Whenever I hear the word ‘war,’ I am terrified, because it means going back to seeing children torn apart, missing my children for long periods, living in the midst of blood all the time, and a lack of mental and physical comfort.”

According to the spokesman for the Ministry of Health in Gaza, Ashraf al-Qudra, the Israeli aggression on Gaza this past summer resulted in the death of 2,147 Palestinians, including 530 children and 302 women, while 10,744 people were injured, including 3,258 children and 2,089 women. “The number of martyrs among the medical staff has reached 23, and 83 were wounded,” Qudra said.

Sahbani explained that the doctors in Gaza were not prepared to deal with the war in light of the acute shortages of medicine and medical supplies at the Ministry of Health’s warehouses. He expects the health system to fail in case of another war. “We had no options on how to deal with the nonstop arrival of [the] wounded. … We were only able to use the available resources, as the number of injured grew larger, and to appeal to those in possession of medical supplies to donate these to us.”

He pointed out that there was a 25% shortage in medication and 50% in medical supplies because the Ministry of Health in Ramallah delayed sending medical shipments to Gaza. “So we didn’t think we could succeed in our mission in dealing with the wounded. But some civilians and private pharmacies donated some medicines and medical supplies, which helped us deal with the wounded. … I still remember very well a man who came to the hospital to donate a small bag containing iodine, needles and sutures. He saved many lives with this handful of medical supplies.”

But the horrific stories from the hospital haunt Sahbani. “I cannot forget this: A father and three of his children arrived at the hospital; they were covered in blood. When I started treating the children, one of them said, ‘Please leave me and go save my father.’ So I felt that there was something [wrong] with their father. When I went to the father to treat him, he said to me, ‘Please let me go and save my children.’ Then I started crying. All three children lived but their father [died].”

Mohammad al-Qarshali, a doctor who worked during the Gaza war at the Shifa Hospital, talked about his experience during the Shajaiya massacre, which resulted in a few hours in hundreds of dead and wounded. He told Al-Monitor, “When the Israeli army committed the Shajaiya massacre, east of Gaza City in the early hours of July 20, we received more than 300 injured civilians in one batch, which caused significant confusion in our ranks and made us completely [at a loss] on how to deal with the crisis in a systematic way.”

He explained that doctors worked 24 hours a day and only got some sleep in hospital corners every once in a while, to wake up to dozens of new wounded who kept arriving at a constant pace.

“The reception and emergency departments at the Shifa Hospital — the largest medical complex in the Gaza Strip — have a capacity of 20 beds only. Many injured persons were lying in the hospital’s passageways, corridors and on the ground. All needed immediate assistance. Each doctor had to deal with at least three wounded persons concurrently,” Qarshali said.

Issa Nasser, a doctor who worked during the war at Kamal Adwan Hospital in the northern Gaza Strip, told Al-Monitor that the scenes of death and torn bodies that arrived constantly at the hospital were “enough to mentally paralyze the doctors.”

Psychological pressure had a far greater impact than physical fatigue. “One day during the war, I had a nervous breakdown as I was stitching up an injured toddler. My hands froze and stopped working. I rushed out of the hospital, crying nonstop,” Nasser said.

Nasser still remembers the day when a 1-year-old baby girl arrived at the hospital. She was unconscious and covered with blood, while still clutching her toy doll.

The doctors in Gaza were also affected by salaries not being paid during the war. Sahbani said, “We were under a lot of pressure. Our bodies were dealing with the wounded in the hospital and our minds were busy in [finding a way] to secure food for our children, whom we hadn’t seen in a long time. I even considered selling my wedding ring to provide necessities for my family.”

The doctors returned to their normal lives after the dust of the aggression on Gaza settled. However, they have not forgotten the faces of those children who begged them to save their lives, which they were often unable to do. When looking at their own children, doctors in the Gaza Strip recall those painful memories.