The Children of Gaza’s Tunnels

The Israeli-imposed blockade on Gaza is helping the smuggling tunnels flourish, with many children choosing to work in these tunnels out of necessity despite the danger. 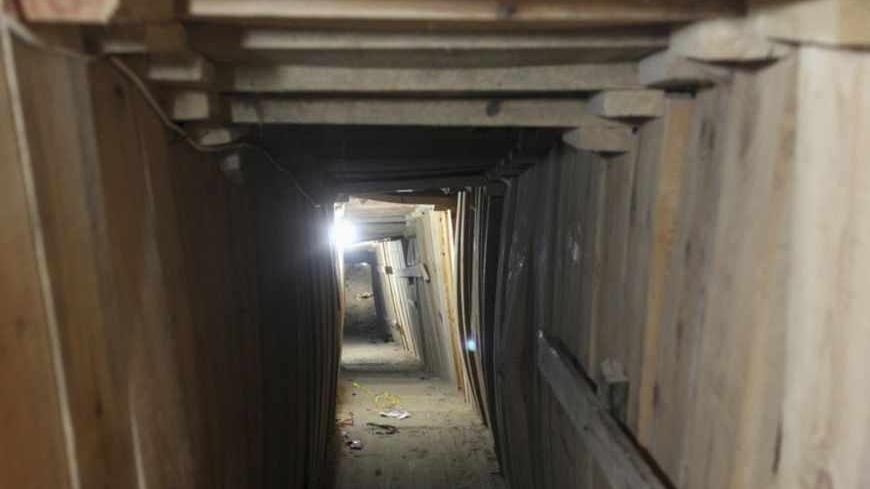 A working tunnel, which is used to smuggle people from Egypt to Gaza, is seen in the Egyptian border city of Rafah, May 13, 2013. - REUTERS/Asmaa Waguih

Inside a long corridor less than two meters wide, a dim ray of light sneaks through a small opening at the top of the basement where a border tunnel begins. A Palestinian child named Mohammad enters the tunnel in Gaza and walks thousands of meters in the dark to the other end, in Egypt.

Dozens of Gaza's children repeatedly pass through these “crossings of death” — the tunnels separating the border between Egyptian Rafah and Palestinian Rafah. They do so because they are poor. They do so despite the danger that the tunnels might collapse. Lately, Egyptian security forces have been flooding the tunnels with sewage.

The tunnels are a way for the people of Gaza to get essentials, which are being otherwise prevented from reaching them by Israel’s seven-year-old blockade. According to local estimates, it is believed that 10,000 people work in the tunnel business.

Mohammad, 14, spends ten hours a day transporting merchandise from Egypt to Gaza. He is worried about dying as he tries to earn a living, and he is worried that Egyptian security forces might find the tunnel.

Many children work in the tunnels with the approval their parents, especially if the family's main breadwinner is unemployed or too old, as is the case with Mohammad’s father.

Living conditions in Gaza are deteriorating. According to the Palestinian Central Bureau of Statistics, the unemployment rate has reached 80%. The biggest segment of unemployed workers consists of those who used to work in Israel before the blockade was imposed in 2006.

Rafah border tunnels have witnessed many collapse accidents, which have claimed hundreds of lives. But Mohammad told Al-Monitor that the Israeli siege leaves him with no choice but to work in the tunnels.

For very little money, Mohammad (who refused to give his last name) transports heavy boxes that his small body can barely carry. The boxes contain various foodstuffs.

Life between the two Rafahs

Ahmad Abu Aisha, 15, has been moving back and forth between the two Rafahs — the Egyptian and the Palestinian — for the past two years. He has become the tunnel owner’s top worker.

Ahmad doesn’t worry about dying. He is earning money to pay for his father’s diabetes and hypertension treatments. His father, who is unable to work, doesn’t know about Ahmad’s work because Ahmad attends school during the day and works for 5 hours in the tunnels at night.

Ahmad gets frustrated when merchandise he is supposed to ship does not arrive on time. He told Al-Monitor that he gets paid 50 to 100 shekels [$14 to $28] per work shift, which is enough to make up for the days when no work is available.

When asked why he allows children to work in his tunnel, one tunnel owner told Al-Monitor that working in the tunnels is not as dangerous as it used to be and that he is willing to hire anyone who can do the work, regardless of age.

The tunnel owner did not give his name for fear that Egyptian security forces might capture him. He said, “The tunnels have become part of our lives. The unemployed don’t have many options besides working in the thousands of border tunnels. Those tunnels are a normal byproduct of the blockade and I think that they will continue to exist even if the border crossings are opened.”

Human rights organizations have warned that children being exploited by employers is a violation of Palestinian and international laws, and that it is reckless on the part of the parents to make their children work in dangerous areas.

The National Society for Democracy and Law in Gaza recently pointed to the apparent failure of concerned authorities and human rights organizations in preventing child labor under hazardous conditions, especially in the tunnels under the Egyptian-Gaza border. The society condemned this dangerous and destructive phenomenon and called for preventing children from working in tunnels, as well as for rehabilitating those children suffering from behavioral and psychological problems or drug addiction.

A report issued by the society in November 2009 reported a number of violations: children transporting commercial goods through 700-meter-long tunnels at a depth of more than 12 meters; some children working an average of 12 hours a day transporting various goods; and a large portion of those children not attending school.

The government in Gaza has said that it is monitoring Gaza’s tunnels and is taking action to make employers protect tunnel workers. Hamas considers the tunnels to be an exceptional measure that will end once the blockade is lifted.

The administrative court recently ruled that Egyptian President Mohammed Morsi must take the necessary actions to close and demolish all tunnels between Egypt and Gaza because those tunnels are taking away resources from Egypt and sending them to Gaza.