Israel has continued to block the return of Palestinians who were forcibly removed from Bethlehem 11 years ago to end the siege of the Church of the Nativity, writes Khaled Kraizim. 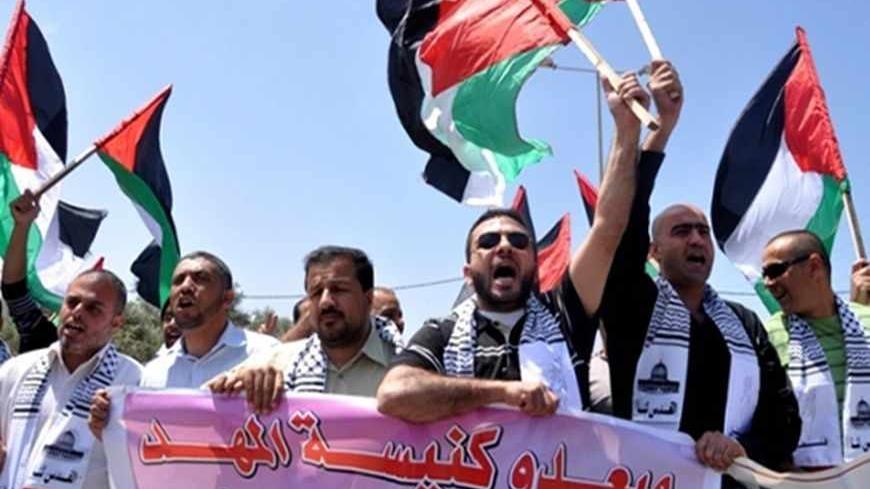 Palestinians exiled after the 2002 Church of the Nativity siege demonstrate in Gaza demanding to return to their homes May 10, 2012. - Safa/Mohammad Assad

Fahmi Kanaan has suffered for 11 years since being forcibly removed from his hometown of Bethlehem in the occupied West Bank. His only desire is to return to his birthplace after long years of futile demands.

“I want to see my family and live in the town of my birth,” says Kanaan, words that he and other Church of the Nativity deportees have long repeated in the hope of finding someone, anyone, who would heed their call for help to end their predicament, to no avail.

Israel deported 26 Palestinians from the West Bank to Gaza and 13 European countries after laying siege to the Church of the Nativity on May 10, 2002. They were deported as a result of a deal reached between the Palestinian Authority and the occupation forces, which stipulated that they be exiled for two years and put an end to a siege that lasted 39 days. Yet the exile has continued to this day as a result of Israel reneging on the agreement.

Close to 250 Palestinians had taken refuge inside the church in 2002, when Israel blockaded West Bank cities and confrontations intensified between Palestinians and Israeli occupation forces. Subsequently, Israel deported 39 people it characterized as “terrorists,” according to Kanaan.

May 10 will mark the 11th anniversary of these people's forcible banishment from the cities where they were born and raised. Meanwhile, their psychological and social suffering worsens with every year.

Many of them have lost parents or other family members who died during their exile, and they were denied permission to attend their funerals. None of them were allowed to return home except for Abdallah Daoud, who was deported to Europe and managed to return in March 2010, carried in a coffin by his pallbearers to his birthplace in the Balata refugee camp in Nablus.

Kanaan, the spokesman for the deportees to Gaza, told Al-Monitor that the deportees living in Gaza or Europe are still under house arrest and all hoped to return to their West Bank cities on their own feet, rather than carried in a coffin like their comrade.

The deported Kanaan, whose wife and children came to live with him in Gaza, wondered, “How much longer will we be kept apart from our relatives, whom we cannot see or be with?” He pointed out that at least 16 deportees have lost their mothers or fathers while at least 15 have lost a family member, such as Samed Khalil, who was deported to Spain and most recently lost the mother he has not seen since being exiled.

According to Kanaan, the deportees suffer from psychological and social problems from losing hope of finding solutions to their predicament or return to their cities. Additionally, their families in the West Bank have been prevented from coming to visit them in Gaza through the Beit Hanoun (Erez) crossing, which separates Gaza from the occupied Palestinian territories.

Kanaan explained that Bethlehem is only 45 minutes away from Gaza by land. Yet Israel refuses to allow the families of deportees to travel except through Jordan, on to Egypt and then Gaza. This greatly increases their travel expenses and turns the trip to Gaza into an arduous two-day journey.

The deportee in his forties continued: “For us, exile is akin to a war crime, because it was a mass deportation that tore people from their lands, especially since both the Fourth Geneva Convention and the Universal Declaration of Human Rights forbid the removal of civilians from their homelands.”

Throughout their years in exile, the deportees have resorted to a number of international humanitarian and rights organizations, including the United Nations, the Red Cross and various Israeli human rights organizations, in order to find solutions to their predicament. Israel, however, stubbornly opposes any resolution and prevents them from visiting their homes.

Kanaan affirmed that it was every deportee’s right to return to his land and live among his family members after twelve years of exile. He asked all concerned parties to mobilize and force Israel to abide by international law.

The Church of the Nativity deportees to Gaza and European countries went on a three-day hunger strike last year to commemorate the 11th anniversary of their deportation and pressure Israel into ending their ordeal.

Kanaan pointed out that the deportees intend to take additional steps in protest as the 11th anniversary of their deportation approaches on May 10, in objection to their cause being ignored by the Palestinian Authority and all other national factions and parties.